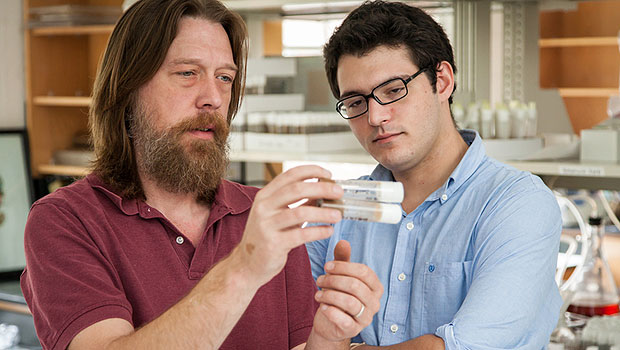 When you base your research career on something as minuscule as the period at the end of this sentence, you might have to deal with a questioning look or two.

And when you tell people that little period – a fruit fly brain – is wired in the same way as their brain, the reactions can get intense.

Erik Johnson, an associate professor in biology who studies fruit flies, says he gets two responses.

“One is complete disbelief, to the point of almost being angered by it. I think that’s unfortunate, because humans could stand to be a little more humble,” he said.

“Others are just sort of like, wow, but with an interest – open to the idea that brains are brains, and they all do similar things. Complexity doesn’t stem from having different genes or special nerve cells. The basic biophysical, biochemical makeup is the same. The difference in complexity is in the number of cells. Why flies are so simple is that they have approximately 100,000 neurons versus the approximately 11 billion in humans.”

Johnson’s latest study appears in the October issue of the Genetics, which is available online now. In it, he and his research team use the fruit fly, Drosophila, to look at an enzyme called AMP-activated kinase and its role in signaling the hormone that elevates the level of sugar in the blood.

Those findings could be key to developing new treatments for diabetes and aiding in all sorts of metabolic research, including weight-loss drugs.

Jason Braco, a second-year graduate student from Warren, N.J., and lead author on the AMP-activated kinase paper, said that people usually are grossed out and confused when he tells them he dissects fruit fly brains.

“They ask how I do it, and when I tell them just a sharp pair of tweezers, they usually don’t believe me,” he said. 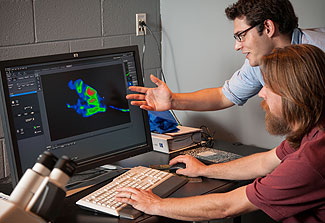 He got involved with Johnson’s research during his undergraduate years.

Braco said Johnson really tries to instill a love of science in his students and to involve them in his research. He first noted it as an undergraduate, and has come to appreciate it as a graduate student.

“It’s great to watch now from an outside perspective, because often Erik will work on building basic knowledge of necessary to understand the project and always being open to questions. I often tell knew students in the lab that if you do not know how to do something or want to check that it is encouraged to ask and talk about your project,” Braco said. “Most importantly is his perspective. … Erik recognizes that the only thing separating a student and a professor is time.

Through work in Johnson’s lab, Braco has become a big fan of fruit flies as a model for larger systems.

“When talking to friends and family, I always plug the utility of Drosophila as providing insight into mammalian – even human – systems,” he said. “Basic science, like studying fruit flies, establishes the basis for many future experiments in many different organisms.”

Most of the fruit flies Johnson uses in his lab come from a stock center in Bloomington, Ind., that has more than 50,000 strains of the insect. Wake’s scientists also generate some of their own transgenic fruit flies; and Johnson has even collected some from his nearby farm so his researchers can make comparisons with wild strains. 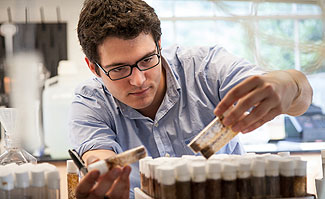 Johnson and team have started to look at the rest of the hormone signaling system they began exploring for the Genetics study. Johnson said he expects the research to last well beyond the next decade – all on the brain of a fruit fly.

Braco said the complexity of the research process is what has surprised him the most about his work with Johnson.

“I had no idea about the amount of time and energy it takes to design these experiments, to get replicate-able results, to learn the methodology, and everything else that goes into a single paper,” he said. “The entire process is just so much larger and more complicated than I imaged.”