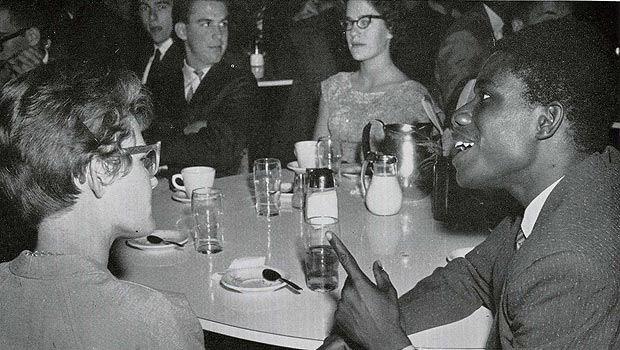 Fifty years later, Reynolds will come back to campus to mark the anniversary of the integration of Wake Forest as part of “Faces of Courage: Celebrating 50 Years of Integration,” a yearlong series of events designed to encourage discussion, bring people together and honor those who helped the school become the first major private university in the South to integrate.

Reynolds graduated in 1964 with a bachelor’s degree in history.  He and his Wake Forest roommates as well as other student leaders and administrators from the 1960s will speak at 3 p.m. Sept. 21 in Brendle Recital Hall.  A new film documenting their story, “Faces of Courage: Wake Forest’s Impetus to Desegregate,” will be shown at the event.  The public is invited to attend.

The Faces of Courage website, launched this week, highlights other events planned throughout the academic year and traces the history of diversity and inclusion at Wake Forest with a detailed timeline.  Through audio and video, alumni, students and faculty share stories about their part in making Wake Forest a more inclusive community.

In one video, 1963 Wake Forest graduate J. Glenn Blackburn shares his definition of courage. Blackburn is often credited with leading the movement to end racial segregation at Wake Forest. As leader of the African Student Program, Blackburn mobilized student and faculty support to raise money for Reynolds to attend Wake Forest.

Another video highlights the friendship of a white student, Gayle Ford (’73), and a black student, Beth Hopkins (’73), who attended Wake Forest a decade after Ed Reynolds enrolled and became close friends. Hopkins became the first black homecoming queen in 1973.

“When people think of diversity, they think black and white,” said Barbee Oakes (’80, MA ’81), assistant provost for diversity and inclusion who is leading the Faces of Courage initiative.  “This goes beyond racial diversity.  We are honoring all of the courageous people who have contributed to diversity and inclusion in the past 50 years.  Wake Forest is committed to creating a culture of inclusion where everyone can thrive—a culture that unlocks Wake Forest’s enormous reservoirs of innovation and talent, and eradicates barriers to engagement and collaboration.”

This fall, an Oct. 18 conference will focus on Muslims as minorities and the increasingly diverse Muslim population in the U.S. and North Carolina.  A Nov. 29 screening of the classic film about the segregated South, “To Kill a Mockingbird,” will feature a Q & A with the actress who played “Scout.”

The Faces of Courage celebration focuses on important historical events, but also looks forward to the continuing evolution of the University’s broader support of racial and ethnic diversity, religious pluralism, service to those with disabilities, and acceptance of all sexual orientations and gender identities.

“As we look back to 1962 and the years that followed, we realize anew our debt to those few men and women of courage who challenged what they saw as injustice,” said provost emeritus Ed Wilson (’43), who was dean of the college in 1962.  “We have become, I hope, in ways that could not be imagined 50 years ago, an open university — welcoming, inclusive, serving humanity in all its manifestations.”