Fueling a passion to teach 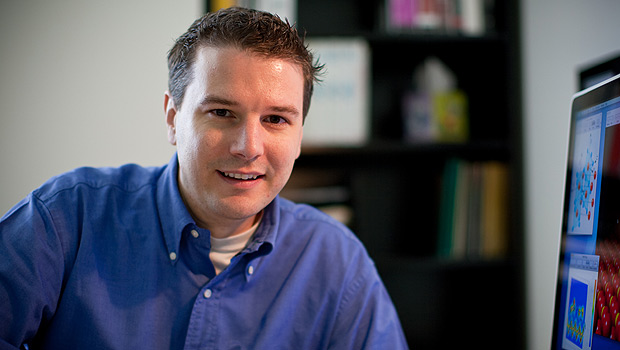 Timo Thonhauser, assistant professor of physics, has taken on one of the toughest problems that stands in the way of making hydrogen cars a reality: hydrogen storage.

His research is supported by the most prestigious award the National Science Foundation has to offer for young scientists – the NSF CAREER Award – given to a select few junior faculty nationwide who excel as teacher-scholars. The award comes with a $426,572.00 grant, which Thonhauser will use to determine whether any of three materials – magnesium borohydride, ammonia borane, and special alkanes – could be used to create a safe and efficient storage solution for hydrogen.

“Simply pumping pure hydrogen into pressurized tanks in your car is inefficient and potentially dangerous,” Thonhauser said. “But even if you could, you just cannot get enough of it into the tank – you’d drive for 50 miles, and then your car would stop.”

The NSF CAREER Award, announced in late August, also will allow Thonhauser to expand his role as educator and mentor. As part of the grant, he will set up an interdepartmental mentoring program to help graduate and post-doctoral students improve their research skills and transition to a career in science.

“His class continues to remain one of the most memorable components of my WFU ‘memory bank,’” said Anderson, who took a general physics class with Thonhauser. “His instruction impacted the way in which I interpret and synthesize information, and has remained a vital part of my learning process. But, most importantly, his kindness is a hallmark of this university.”

As part of the CAREER Award, Thonhauser also will work with the SciWorks science center in Winston-Salem to develop an interactive exhibit and related programs about using hydrogen as fuel.

“People in general don’t know enough about alternative fuels, and awareness is an important first step in getting the technology accepted,” he said. “I want to be at the science center – and have some of my students join me there – to help explain problems with our current fossil fuels and possible solutions using hydrogen as an alternative.”

Thonhauser is a condensed matter theorist, using computers to test concepts; he works with other scientists who perform experiments to confirm his findings.

“Today’s technology crucially depends on materials of all kinds,” he said. “For example, if you want to build a new airplane, you want a material that’s light and strong. With the aid of theory – quantum mechanics – I can help you find that material.”

In addition to the hydrogen storage project, his research group is looking at metal organic framework materials that could help capture greenhouse gasses, and nuclear magnetic resonance, which sheds light on the structure of many materials, ranging from water to human DNA.