The physics of music 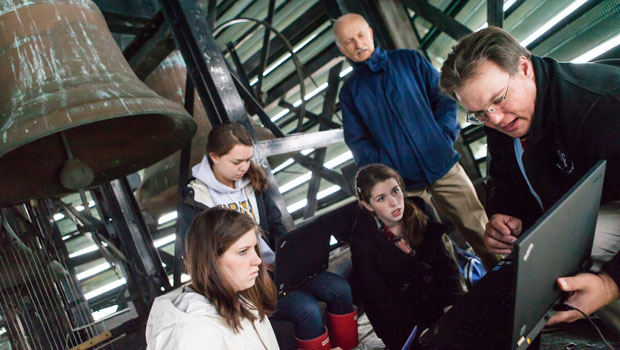 High in the steeple of Wake Forest University’s iconic Wait Chapel, students in a physics of music class collect sound spectra while sitting among the 47 bells that make up the University carillon.

With the help of a sound meter, microphones, laptops and software, they measure the vibrations that travel through the bell tower when University Carilloneur Ray Ebert plays a note.

The carilloneur controls the ringing of the bells in a room directly beneath them and behind the upper part of the clock face. Ebert uses wooden levers and pedals to activate clappers hung at each bell. When he strikes a key, the clapper strikes the inside of the bell at the ideal point to produce the bell’s tone.

“Bells have unique acoustical properties,” says music professor Stewart Carter, who co-teaches the class with physics lecturer Jack Dostal. “Any musical note, with very rare exceptions, has several other tones sounding with it. The ear hears more than one note but doesn’t notice the other tones because the fundamental tone is louder.” 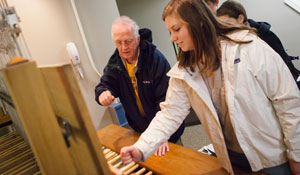 A bell rings when the carilloneur depresses the corresponding wooden peg on the keyboard.

During the class, Dostal hollers down the open trapdoor to Ebert, asking him to ring the A minor bell. Students aim their microphones, which are attached to their laptops, toward the bell and record the wave pattern using audio editing software. The group can see in real time the strength and duration of the wavelengths, but the recorded tones are saved on their computers for classroom analysis later.

The physics of music class covers the physics of waves and sound and their application to musical instruments. “We hope our class is of interest to music majors, physics majors, and everyone in between,” says Dostal.

The course includes basic background on oscillations and information on the ear, hearing and human interpretation of sound. Students study sounds formed by brass, woodwind, percussion and string instruments and learn about musical spaces and how a building’s construction affects room acoustics.

The class also explores the physics of the human voice. At the Center for Voice Disorders at Wake Forest University Medical Center, students can watch the motion of their own vocal chords using a camera on the end of a cable that goes up the nose and slightly into the throat.

“To learn physics, it helps to have interactive class engagement,” says Dostal. “Small group discussions and peer instruction help. But, in our class, we also get out of the classroom and experience physics and sound in the real world, not just theoretically.”