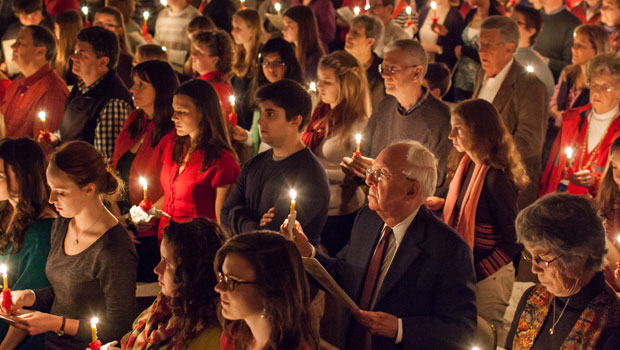 As the final hymns were sung, the candles were lit and the Chapel darkened, except for a large Moravian Advent Star.

In keeping with the holiday tradition, Hearn Plaza was lined with luminaries and Wait Chapel was adorned with wreaths, candles, poinsettias and Christmas trees.

“It is easy to get caught up in the busyness that is about to be Christmas,” Auman said. “The early Moravians on whose shoulders we stand tonight, believed that Christmas was not something to ‘get done’ or to ‘be organized’ but simply something to be received.”

Wake Forest’s first Lovefeast was organized in 1965. The European custom originated in 1747 and was introduced to North Carolina by early Moravian settlers at Bethabara in 1753.