From chemistry to consulting 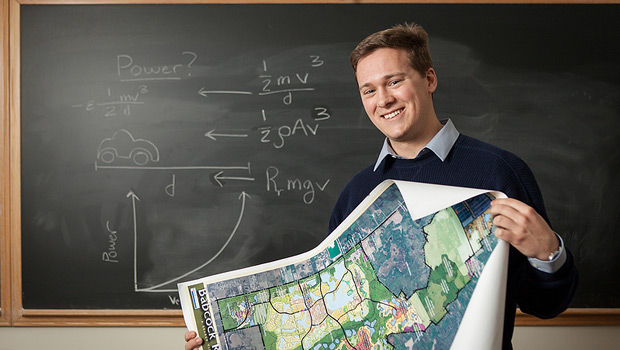 As sophomores declare their majors this week, some may wonder if an interest in science and research predestines them to life in a lab or years of post-graduate professional school.

Not necessarily, said Ryan Daly, a senior chemistry major from Cohasset, Mass., whose college-to-career journey has been anything but a linear path.

Though he has taken many science classes and been involved in multiple scientific research projects, Daly has accepted a full-time job as a strategy and operations federal analyst at Deloitte Consulting. In this position, he will help find solutions for policy issues and business problems.

In addition, Daly is currently working with juniors Mike Tantum and Matt Crismond to develop Sun Tape, an easy-to-use, low cost solution for determining the solar heating potential of a home, business, or public space. Pliable and easily disposed of, Sun Tape would provide the user with information that gauges what environments are optimal for solar panels in terms of both power production and cost effectiveness. The students are now applying for grants and are college finalists for the Emerging Issues Prize for Innovation. Watch the video about Sun Tape:

Daly, who had originally intended to purse a Ph.D. in chemistry, spent this past summer working with chemistry professor and Associate Provost for Research Bruce King on a project that studied the relationship between nitroxyl and hydrogen sulfide, two signaling molecules thought to interact inside the cardiovascular system. Understanding how they work together could lead to new ways of treating cardiovascular diseases. Daly has continued to study these molecules and is currently writing an honors thesis on his experiments.

“Conducting research at Wake Forest and the medical school has been both challenging and rewarding, but it wasn’t until I simultaneously pursued my interests in sustainability and entrepreneurship that I imagined possibilities outside the lab,” said Daly. 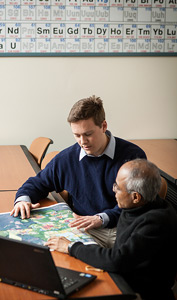 Last semester, Daly’s changed his career plans after taking a class with the Thurman D. Kitchin Professor of Chemistry Dilip Kondepudi called “Green Technologies and Entrepreneurship,” which explores innovative energy solutions. During this class, he worked with other students on a futuristic research project that estimated the energy needs of a fleet of autonomous cars.

This project required critical thinking and mathematical calculations to create a computer program that used various models, based on a range of potential scenarios, to minimize energy losses. The idea is that an entire community could be transported by a fleet of autonomous cars controlled by a computer system that relied on models Daly and his classmates created to meet transportation needs and simultaneously improve energy efficiency.

Inspired by the application of his research, problem solving and social entrepreneurship experience for this project, Daly decided to pursue a career in consulting. Though not initially what he envisioned doing after college, Daly now thinks that consulting is a natural fit for him.

Jessica Blackburn (’13) writes in USA Today College about how to think creatively when declaring a major that might not instinctively lead from college to career. Read more »

“In chemistry there are a lot of different models you have to understand. These models only explain certain things and work in certain areas. It is the same way in the consulting industry,” he said. “Economics can get really complicated with the mixing of different industries and different governmental policies. Like chemistry, it requires an ability to cope with the complexity and know what model to apply.”

“Wake Forest students are known for being very focused, and Ryan is no exception,” said Kondepudi. “I was particularly impressed with how he embraced the challenges of the Green Technologies class and found a way to apply his scientific skills to analyze problems for a business. His experience speaks highly to the value of interdisciplinary courses.”

Daly’s advice for sophomores or first-year students still undecided on their major?

“You don’t necessarily need to know what you intend to do after college when declaring your major,” said Daly. “My advice would be to focus on what interests you and find ways to apply what you learn to whatever you decide to pursue.”