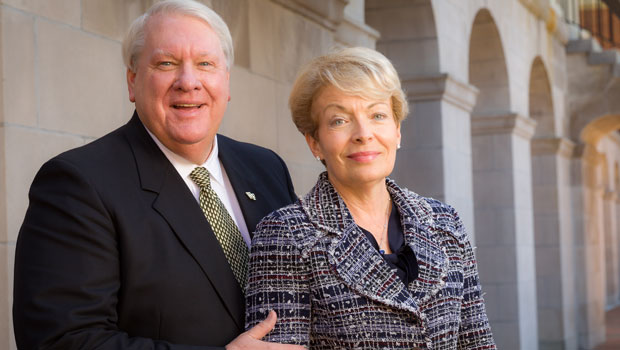 The majority of the gift will fund scholarships for students who are the first in their families to attend college. It is the second largest commitment to scholarships by individuals in Wake Forest’s history.

An earlier gift from the Scotts was instrumental in the establishment of the Magnolia Scholars program in 2009. The program, created to provide first-generation students financial and academic support to attend Wake Forest, has helped more than 120 students. The first class of Magnolia Scholars will graduate in May.

“Wake Forest has long been a place of opportunity, as many of the students who attended the Old Campus were the first in their families to attend college,” said Dr. Scott. “Today Becky and I are proud to honor that tradition and continue our support of first-generation college students through the Magnolia Scholars program.”

“Inspired by his own experience as a first-generation college student, Dr. Scott has shown particular interest in opening doors of opportunity to young people with considerable potential and few resources,” President Hatch said. “Through their prior commitments and now because of their transformative leadership gift, the Scott family has made it possible for even more first-generation students to experience Wake Forest. Those students who come to Wake Forest will benefit from financial aid, mentoring opportunities and assistance in their college transition.”

Aaron Colston, a junior English major and first generation student from Roanoke, Va., expressed his appreciation for the Scotts’ generosity and described the difference the Magnolia Scholarship has made for him. 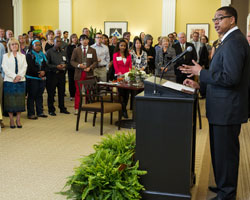 Magnolia Scholar Aaron Colston (’14) gives his remarks in Reynolda Hall in honor of the Scott family.

“For me, personally, the Magnolia scholarship allowed me to come to Wake Forest,” Colston said.  “Thank you to the Scotts on my behalf but also on behalf of my family. In my family, the bar has been raised and college is an option. It has opened my family’s eyes to a whole different concept of what opportunity looks like.”

“I think the gift is extremely important because it allows Wake Forest to highlight, financially support and more fully engage first generation students,” French said. “All of these first generation students have strong academic preparation and tremendous motivation to succeed. What distinguishes the Magnolia Scholars program is the student support programming. It enables us to provide a more complete, enriching experience for students.”

Dr. Scott served as a member of Wake Forest’s Parents’ Council from 1993 to 1997 and previously served on the Schools of Business Board of Visitors. Two of his five children, Rob and Marc, are Wake Forest graduates. Rob earned an MBA and medical degree from Wake Forest in 2000. Marc earned a bachelor’s degree in economics from Wake Forest in 1997 and played on the basketball team.

Dr. Scott is the chairman of Scott Holdings, LLC, a medical investment company. He founded Coastal Physician Group (later named PhyAmerica), a physician-staffing agency, and led Vista Health Plans of Florida before it was sold to Coventry Health Care in 2007.

He is also a member of the board of directors of the Duke University Health System.