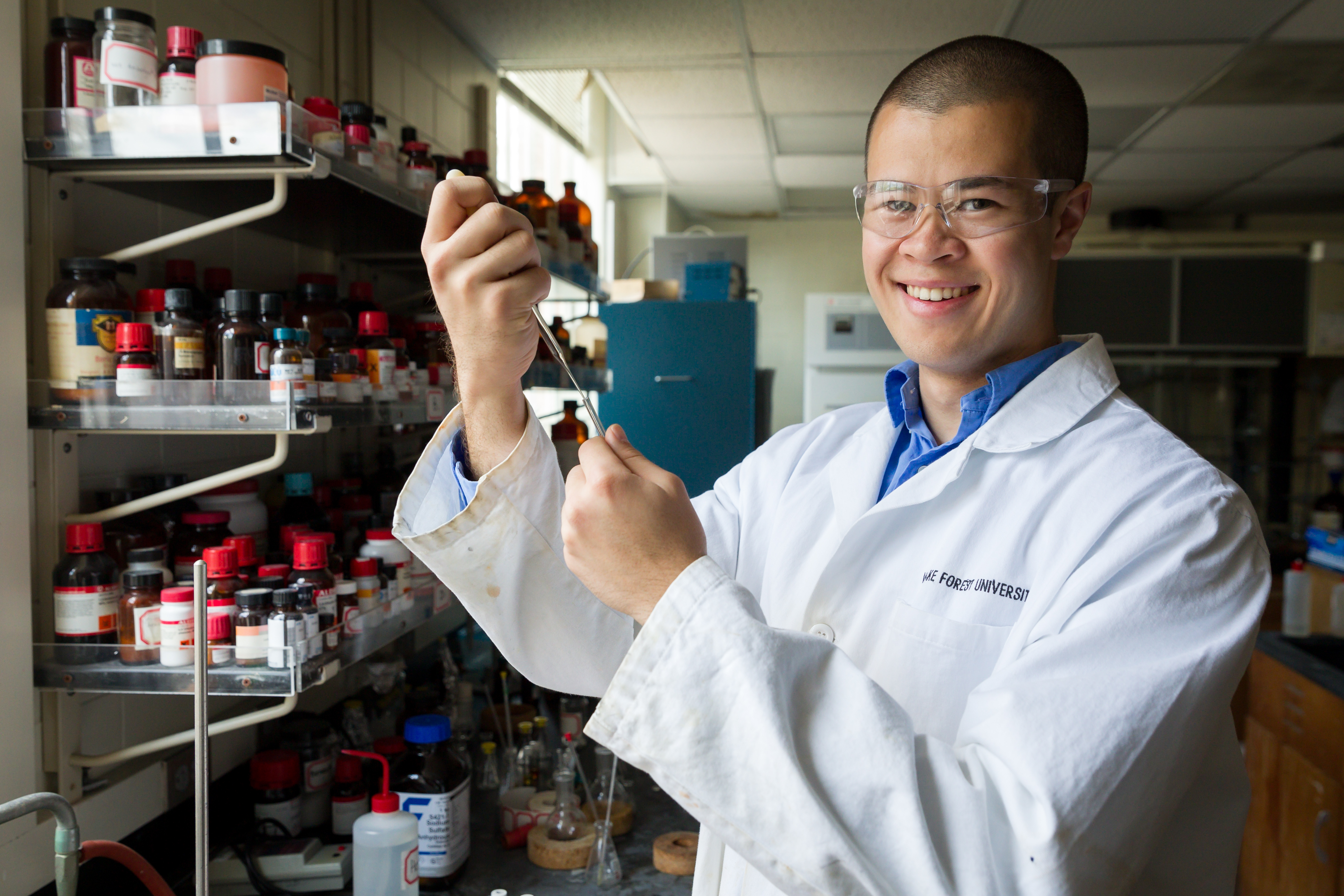 Alec Christian, a junior from Salem, Conn., who studies organic chemistry, was recently awarded a Goldwater Scholarship. Christian was selected as one of 271 math, science and engineering students from around the country to receive the award for the 2013-2014 school year.

The Barry M. Goldwater Scholarship recognizes outstanding college juniors or sophomores who are pursuing careers in the fields of mathematics, the natural sciences and engineering. The scholarship covers the cost of tuition, fees, books and room and board up to a maximum of $7,500.

“It is a huge honor to receive such an award,” says Christian, “and it exemplifies how well my professors in the chemistry department have prepared me to be a creative, independent and well-rounded scientist.” Originally planning on attending medical school, he changed his mind after completing an organic chemistry course and becoming involved with research. “I knew graduate school and a future in research would be a better path for me,” he says. Christian now plans to become a professor.

His desire to teach has been inspired by his personal relationships with his professors, especially his research advisers Paul Jones and Dilip Kondepudi, both Wake Forest chemistry professors.

“Their love and passion for science as well as their dedication to their students and teaching exemplify the type of professor I would like to become.”

Christian is working in Jones’ lab on a project involving “chiral” molecules.

“Hands are the most common example of chirality in nature,” Jones said.  “If I simply describe a hand in two dimensions: palm with four fingers and a thumb, then you would think that a left and right hand are interchangeable. But, because of the way the fingers and thumb are connected to the palm, they obviously aren’t.  This is why one can’t put a right glove on a left hand.  Alec is using light to turn left-handed molecules into right-handed molecules. Structurally manipulating molecules is important in drug development.”

Jones has been impressed with Christian’s passion for organic chemistry.

“The Goldwater award requires students to excel in the classroom and undergraduate research,” he said. “Alec has a great interest in and aptitude for organic chemistry and an eagerness to carry out scientific research that is exceptional.”

In other research, Christian has focused on organometallic reactions. His goal is to make a positive impact on the medical field by synthesizing natural products in an effective and sustainable manner and he hopes his research will lead to the development of sustainable products that can be mass-produced by pharmaceutical companies to treat various diseases.

This summer he will be interning at Pfizer, one of the world’s largest pharmaceutical companies, in the organometallics lab.

In addition to his current research and studies, Christian is also a member of the Golden Key National Honor Society and a Wake Forest Scholar. He serves as the vice-president of the American Chemical Society Student Affiliates and as a student adviser. He was the recipient of the 2013 ACS Division of Inorganic Chemistry Undergraduate Award.

The Barry M. Goldwater Scholarship and Excellence in Education Program was established by Congress in 1986 to honor Senator Barry M. Goldwater.  The program was designed to encourage outstanding students to pursue careers in the fields of mathematics, the natural sciences and engineering.  The Goldwater Scholarship is the premier undergraduate award of its type in these fields.  A complete list of this year’s winners is available here.