Shortly after birth, Charlie Saffian was diagnosed with Down syndrome.

His sister Eleanor was nine at the time. At first, she didn’t know what to expect of her new baby brother.

“I remember looking around my school cafeteria and thinking there are a lot of people here with special needs, and I know nothing about them,” she said. “I didn’t know what my baby brother was going to be like.”

Day after day, Saffian said she came to realize her brother’s condition, a genetic disorder where an extra chromosome is passed to a child from one of its parents, did not make him any less of a person.

“Charlie does chores like the rest of us and cheers on the Bruins like the rest of us. He beats me at Xbox every day,” she said. “Charlie will take longer to learn how to do multiplication and read, but he is going to be able to do all that on his own time.” 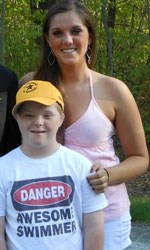 Eleanor Saffian, now a rising senior at Wake Forest University in Winston-Salem, N.C, said her lifelong relationship with Charlie inspired her to pursue a career as a genetic counselor – a job that will allow her to shed light on misperceptions about Down syndrome and help new parents with a Charlie of their own.

Saffian said she struggled with the demanding curriculum at Wake Forest as an 18-year old student. This had her at times doubting whether or not she would be able to make her professional dreams a reality.

She often turned to Clifford Zeyl for advice. Zeyl, an associate professor of biology, studies evolution as it occurs in budding yeast. He said he was immediately struck by her initiative and focus on the big picture. He invited her to join his lab.

“A semester of research is a low investment way of finding out if a particular area of science will enrich your education and help you beyond college,” he said. “Eleanor has a personal connection to the field of genetics that has kept her here working with me for more than a year.”

Saffian’s research for Zeyl is on the evolution of genetic systems. She is focusing on what allows a population of a single species to diversify into multiple different organisms.

“The hands-on experience has really helped me,” she said. “Professor Zeyl also takes the time to help me think about the bigger picture in terms of my future career.”

Saffian is working at Massachusetts General Hospital’s (MGH) Down Syndrome Program in Boston this summer.

Launched less than a year ago, MGH’s Down Syndrome Program is one of the only comprehensive adult and pediatric Down syndrome programs in the nation. It offers multiple clinics each week tailored to meet the unique medical and psychosocial needs of patients of all ages.

Saffian said her internship combines her knack for genetics with her love of working with people like Charlie and their families.

She is currently working to simplify the process of obtaining guardianship for adults diagnosed with a chronic condition such as Down syndrome.

She is also reaching out to patients between the ages of 12 and 25 and their families to set up focus groups to streamline the process of transitioning from a pediatrician to an adult practitioner.

“My hope is that by the end of the summer, families visiting the clinic won’t feel as confused or worried as my family did when Charlie was born,” Saffian said.

In the long term, she said she wants people to realize the only difference between them and her brother is a microscopic extra chromosome.