Writing and producing your undergrad experience 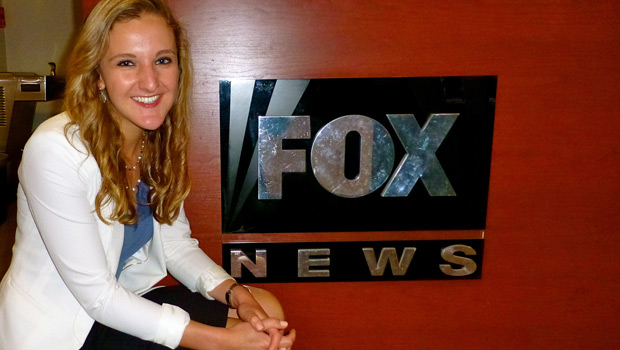 When Jacqueline Sutherland, a senior political science major, moved to Washington, D.C., this summer to intern for the Fox News weekend program, “America’s News Headquarters,” she never imagined that her Wake Forest study abroad experience would translate into a national news story idea and so much more.

In addition to writing headlines, booking guests and meeting influential leaders such as former Vice President Dick Cheney, Sutherland – who spent a semester in Turkey last fall – capitalized on her unique study abroad experience to pitch and produce a segment on the recent protests in Istanbul.

Though she is unsure whether she wants to pursue a broadcasting career or another avenue post-graduation, Sutherland described the combination of her time abroad and her internship at Fox News as excellent preparation for the upcoming academic year, when she will take on the role as Student Government president.

“Both of my experiences in Turkey and D.C. have been revolutionizing. My time at Fox has taught me that when acting as a leader, or as Student Government president, it’s essential to know my audience,” she said. “There really isn’t a traditional Wake Forest student: we all come from different upbringings, different backgrounds, and I need to keep this in mind when forming new policies or when issues arise. I need to work within the framework of the different pockets of constituents that I am representing and personalize my response so that it benefits everyone.”

Charting her own path

Sutherland said that she capitalizes on becoming close with different faculty through mentored relationships.

Before Vice President and Dean for Student Affairs Ken Zick stepped down from his role earlier this year, he instilled in Sutherland that you must always do what inspires and energizes you most – and that’s a lesson she plans to bring with her into the Student Government role.

“I never met someone like Ken; he has more love for what he does than anyone I have ever met,” she said. “His notion of waking up early and staying up late to do what you love resonated with me. It was at that moment I realized that being a reporter in the thick of breaking news, writing the first draft of history, that’s what really energizes me.”

Sutherland first realized her passion for Middle Eastern politics and religion in Professor Nelly van Doorn-Harder’s Introduction to Islam class during her first year at Wake Forest. When it came time for her to choose a study abroad program, she found herself in an interesting position.

She wanted to be in the midst of Middle Eastern culture but she didn’t speak Arabic, so she set out to pilot a program that fit her needs. It would not be the first time she pitched an idea that would change the trajectory of her college experience.

Sutherland researched programs and learned that through Duke University, she could attend the Turkish school, Bogazici University in Istanbul, where she could experience how Islam functions in a secular government 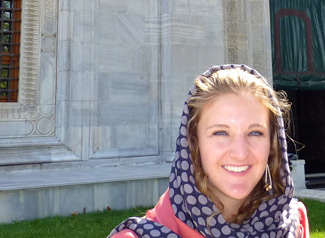 “My time in Turkey was the most incredible, untraditional and eye opening experience,” Sutherland said. “I was completely culturally submersed but as much as I tried, at times it was hard to stay completely objective as a visitor to the country.”

Although her time in Turkey was inspiring and intellectually challenging, it was also unsettling at times. While there, she learned of the phenomenon of honor killings from a close Kurdish friend, or the practice of murdering a family member thought to have dishonored his or her family or community.

“It can be a huge shock for students to see how systems work outside of the United States and to realize that their own is not the one and only system that functions to exist,” said van Doorn-Harder. “Whether the situation is negative or positive, students are able to assess their own position and determine their role in the big picture.”

When Sutherland completed her semester abroad, she struggled with making sense of what she saw. With help and mentorship from faculty, Sutherland was able to come to a resolution with some of the issues she saw firsthand.

“At Wake Forest, we have the freedom to question and challenge our fellow students, professors and administrators. We have the freedom to be inquisitive, imaginative and innovative, regardless of our gender, race or religion. That is truly unbelievable. Turkey restored that realization for me,” she said.

As Sutherland’s internship wraps up and she considers her convocation address to first-year students next month, she says she wants to convey a non-clichéd way of advising the new class to take advantage of everything that Wake Forest has to offer.

Armed with the realization that Wake Forest is truly a phenomenal place, Sutherland wants to take these life-changing opportunities and encourage her peers to create their own undergraduate experience.

“Literally, the sky is the limit,” she said.