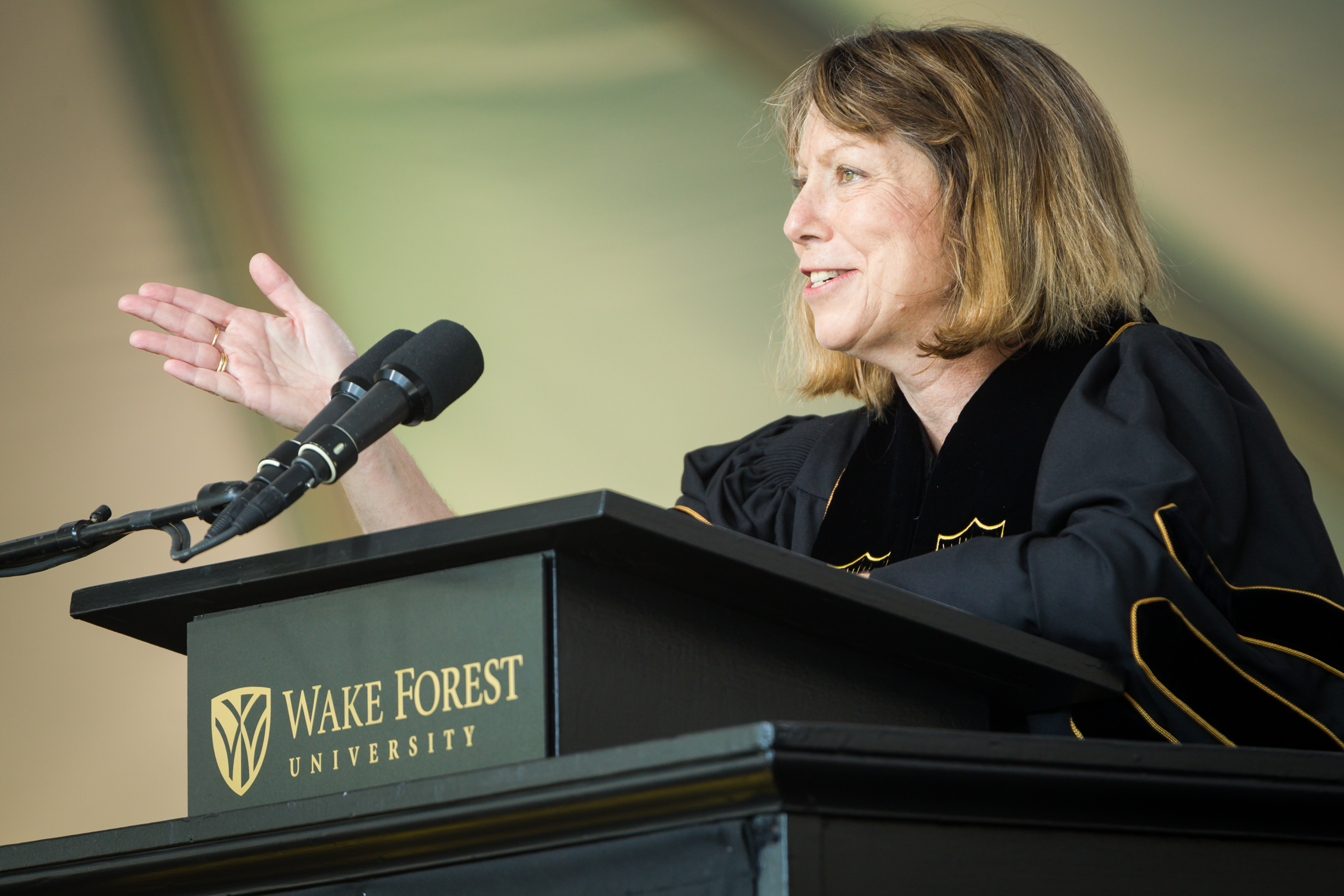 It was the commencement ceremony the entire world was watching.

In her first public address since losing her job as the Executive Editor of The New York Times, Jill Abramson looked out over a sea of soon-to-be graduates, families and more than 50 credentialed media on Wake Forest University’s Hearn Plaza.

Perhaps no one was more eager to hear what she had to say than graduate Hilary Burns.

In a few weeks, Burns will begin her career in the ever-changing world of journalism as a reporter for Bizwomen, a new online publication focusing on women in business, which the American City Business Journals launched this spring.

She knew if there was anyone who could speak of the unique challenges that lay ahead of her it was Jill Abramson.

Abramson earned her BA from Harvard in 1976 and began the arduous process of climbing the ranks of an almost exclusively male-dominated profession. Renowned for her in-depth legal reporting, she went from Time Magazine to the Washington Post and eventually on to the helm of The New York Times, where she was the first and remains the only woman to hold that position. 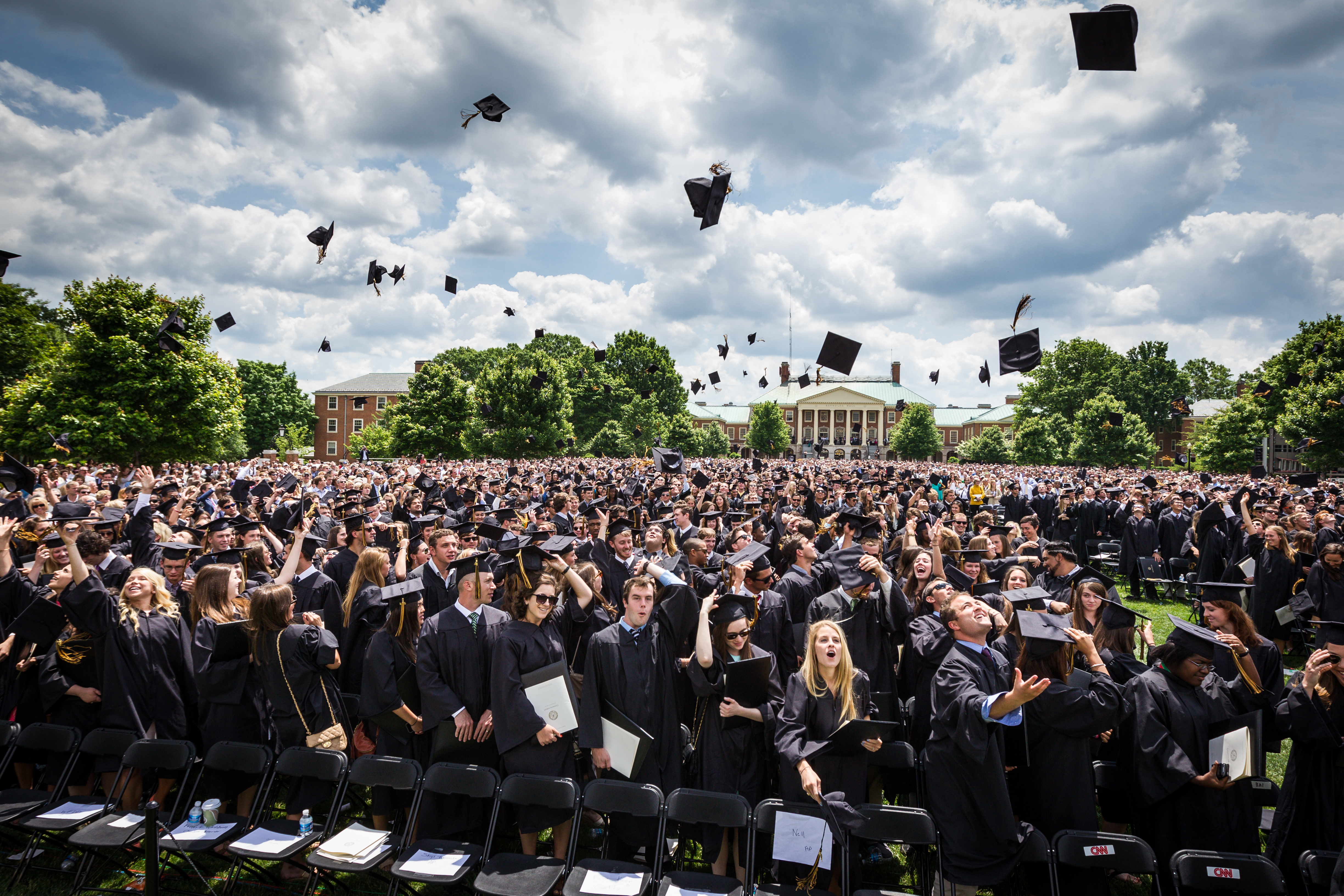 She addressed a crowd of more than 13,000 on the campus of Wake Forest University on May 19.

Like many of the approximately 1,900 members of the Class of 2014 — 1,100 undergraduate and 800 graduate and professional students –Abramson admitted she was nervous about what the future holds next. Nevertheless, she encouraged graduates to be excited and show what they are made of.

“Graduating from Wake Forest means you have experienced success already. And some of you – and now I’m talking to anyone who has been dumped – have not gotten the job you really wanted or have received those horrible rejection letters from grad school. You know the disappointment of losing or not getting something you badly want. When that happens, show what you are made of.”

That’s exactly what Burns, a communication major with a minor in journalism, is determined to do upon her move to Charlotte.

“I know this isn’t going to be easy,” Burns said. “I choose to be a journalist because I am passionate about reporting and think there are so many women out there doing amazing things in the world of business and sadly their accomplishments never come to light.” 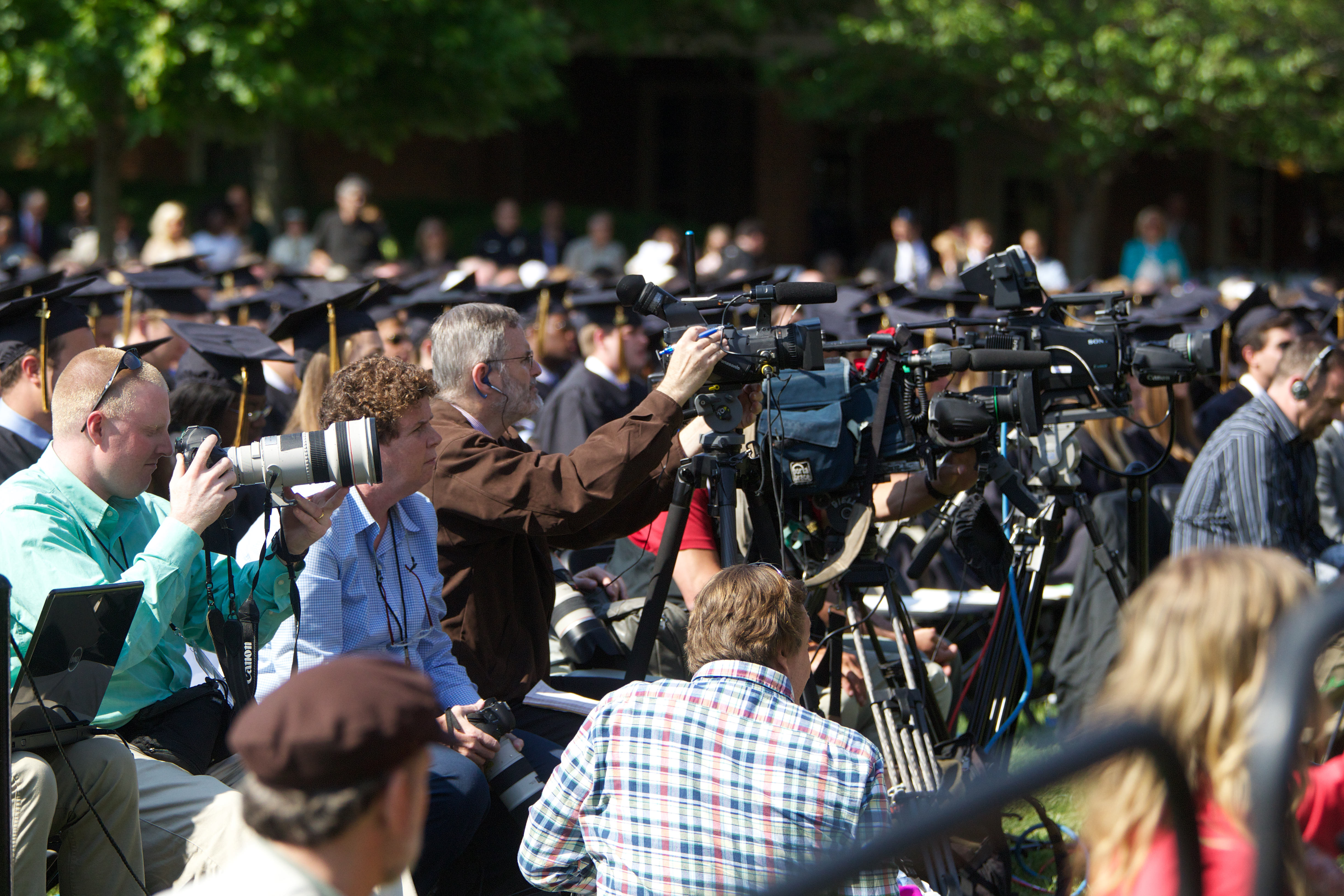 During her speech, Abramson recalled an article she wrote in which a young boy named Cooper Stock was hit and killed by a cab in New York City.

Abramson later met with Dana Lerner, the mother of the boy who is already working on a new law to make the streets of New York City safer. She described Lerner as being the supreme example of resiliency when faced with life’s hardships.

“She is taking an unimaginable loss and already trying to do something constructive,” Abramson said. “We human beings are a lot more resilient than we often realize.”

In his remarks, President Nathan Hatch encouraged graduates to not only excel in their own personal lives but also to seek out the joys and possibilities of teamwork. He said while teams are difficult to build and sustain, they can help individuals to accomplish so much more than they ever could do on their own. 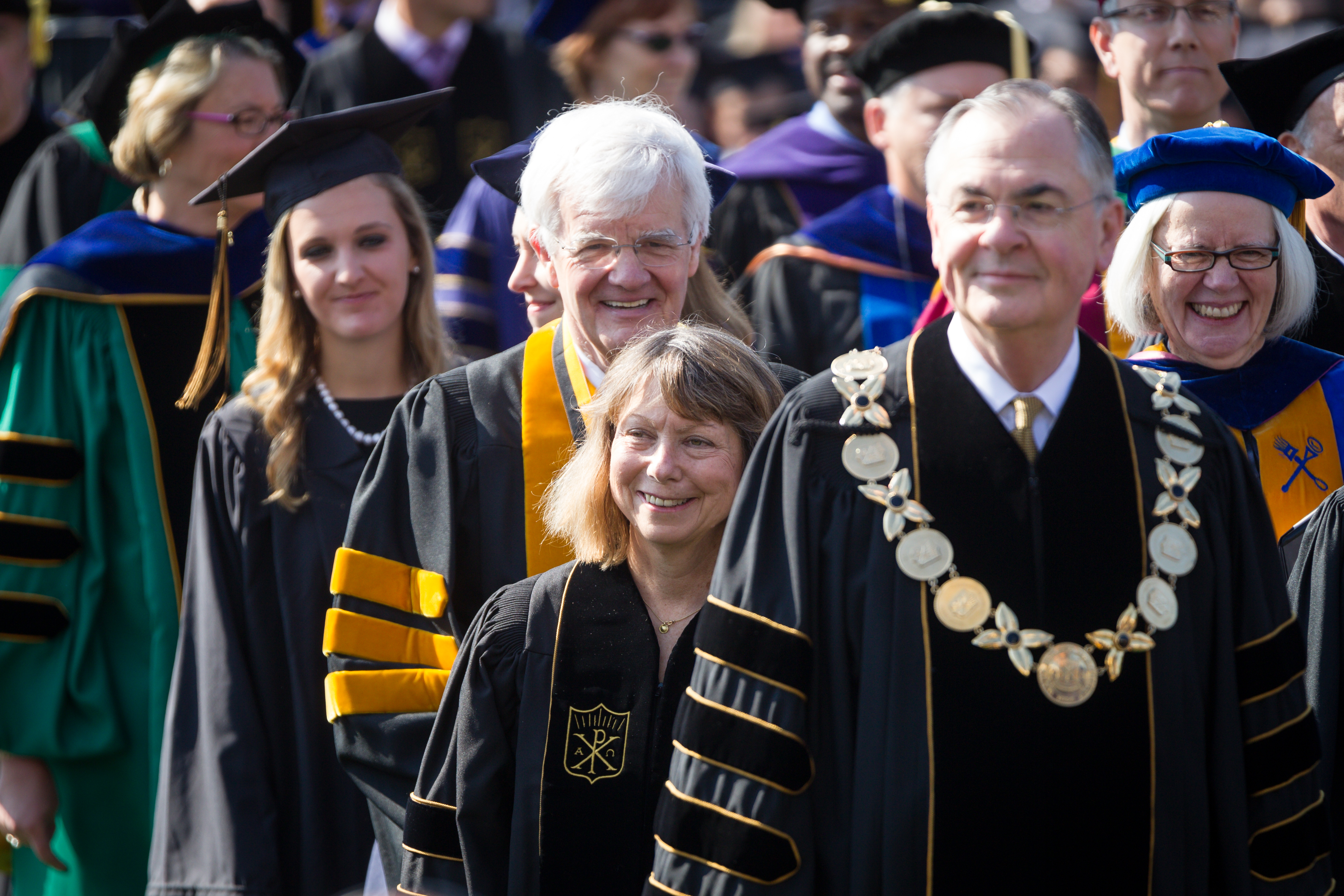 “There is nothing like being on a great team. It can turn the rigors of work into delight,” Hatch said. “To bond with others in the pursuit of great things is a rare privilege and a worthy prize.”

Graduate Philip Rohrer, a communication major, said his time at Wake Forest has him looking at life on a grander scale. He said more than anything, he will miss the great relationships he developed with faculty and peers over the last four years.

“I feel like I have gained not only lifelong friendships here but also amazing relationships with some of the most well known scholars in the world,” he said. “Being able to walk up and hug them blows my mind.”

Graduate Laura Talton, a religion major, said no matter how many years pass, Wake Forest will always be special to her.

“It is such an amazing place,” she said. “Academically, personally, emotionally and socially, the last four years have been an awesome, life-changing experience.”

As for Burns, she said her time at Wake Forest has her ready to tackle whatever lies ahead. She spent all four years of her collegiate experience writing for and eventually serving as Editor-in-Chief of the Old Gold & Black campus newspaper. She was also an online contributor for USA Today. 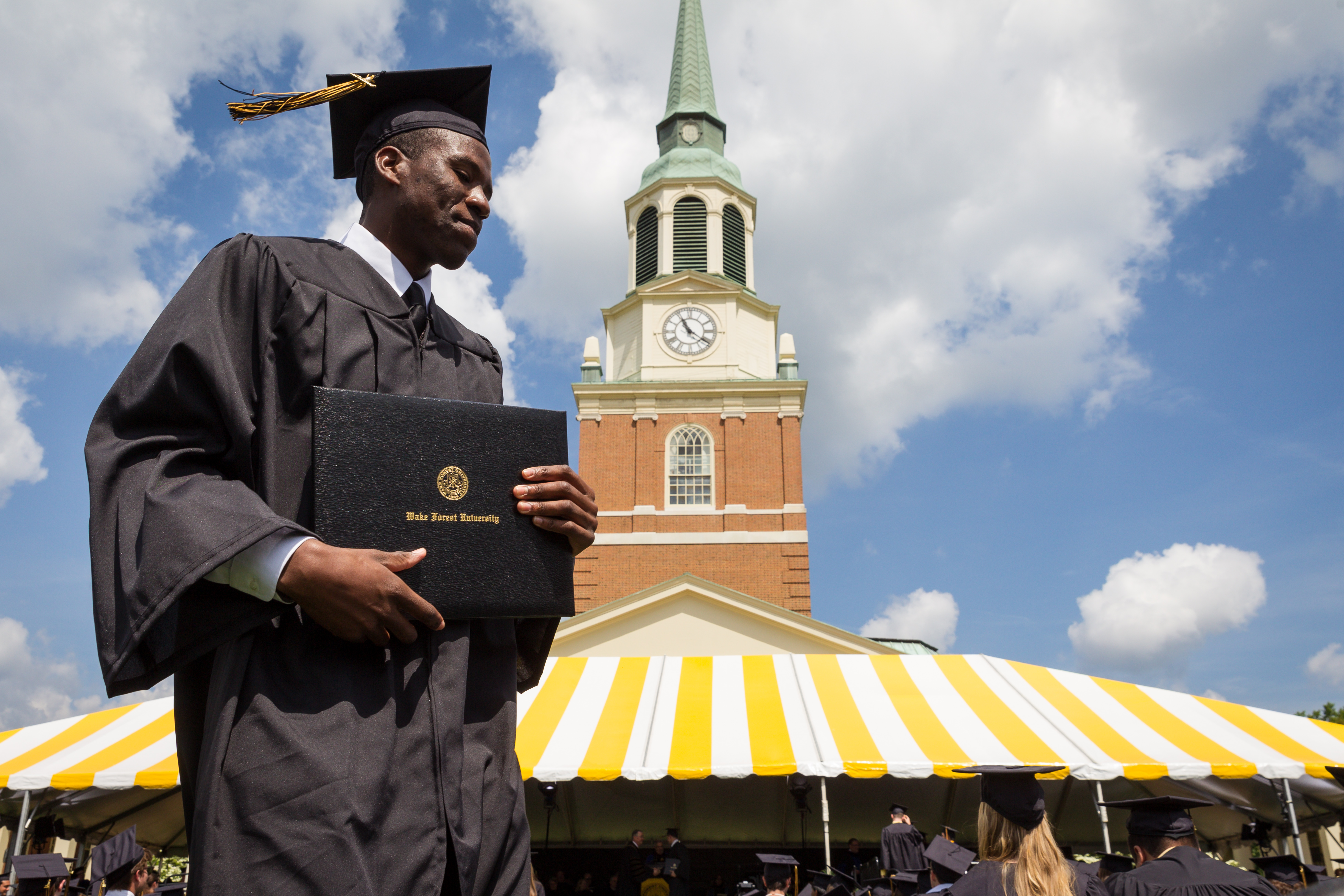 “The hands-on experience I got both in the newsroom and in my journalism classes was invaluable,” she said. “I am definitely going to miss Wake but I am ready to move on to the next step. I am so excited to be writing for my career, it is a dream come true.”

Hundreds of news organizations around the world covered Abramson’s address to Wake Forest’s Class of 2014. Here are some highlights of the coverage.