A closer look at who’s behind bars 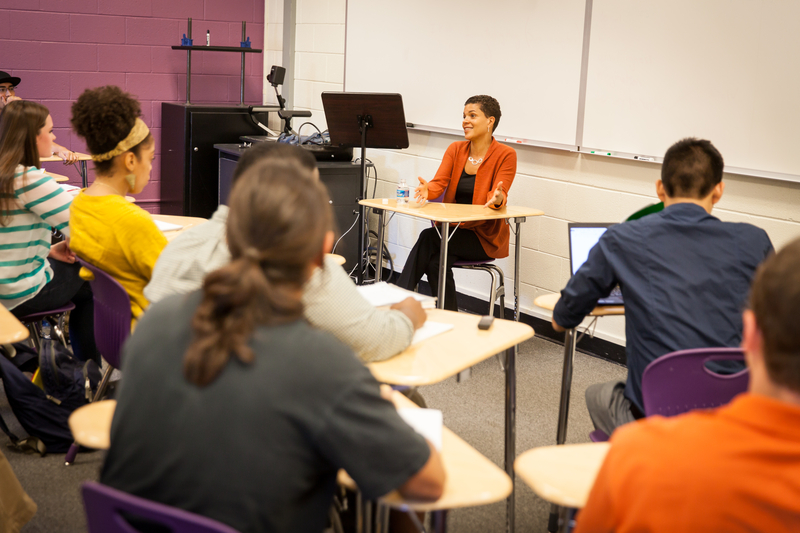 As our country marks the 150th anniversary of the Emancipation Proclamation, a careful look at the American prison system shows how far away freedom is for millions of African-Americans, according to civil rights advocate and New York Times best-selling author Michelle Alexander.

The United States continues to have the world’s highest incarceration rate with more than 2.3 million Americans behind bars, according to Alexander’s book, “The New Jim Crow:  Mass Incarceration in the Age of Colorblindness.”

Across campus, students in psychology, history, law, politics, sociology and several other courses, have been considering this issue and reading Alexander’s book. Seventeen representatives from those classes gathered for an afternoon conversation with Alexander, before she spoke in Wait Chapel as part of the Voices of Our Time series Oct. 1. 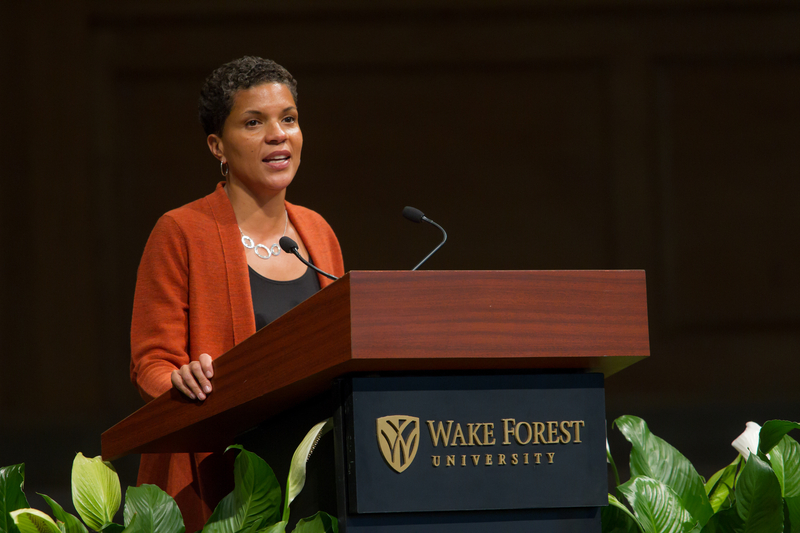 In her book and in the discussion with students, Alexander argued that the prison system’s current approach to crime control targets young people at early ages, before they even have the right to vote, for extremely minor offensives. The system sweeps them in, brands them as criminals and felons, and then releases them, she said. At that point, these “criminals” are then subjected to legalized discrimination for the rest of their lives.

“Powerful lectures like these help our students recognize their own privilege, and the responsibility that privilege entails,” said history professor Michele Gillespie. “It presses them to act upon their moral consciences as citizens of the world.”

Alec Wasilewski, a junior history major with a minor in secondary education, was among the students who came prepared with questions generated from class discussions of the book.

Alexander shared her insights as a prelude to “Lay My Burden Down” — a conference to examine freedom and the legacies of the Civil War on Oct. 17 and 18. Wake Forest, along with The North Carolina Office of Archives and History, Winston-Salem State University and Old Salem, are hosts of the conference. Read more and register online.

“Mass incarceration is a topic so shocking and entrenched in all aspects of society that it reaches a broad range of departments, like sociology or history, and there are many more aspects to this issue in society,” said Wasilewski. “From the prison system to the media to education – everything needs to be reexamined.”

Wasilewski noticed after reading Alexander’s book, and in conversations with peers, that it can be uncomfortable having these racially charged discussions. However, he believes that these are discussions need to take place.

It is difficult to characterize the current system as a basis of crime prevention and control, especially when targets of that system can be defined almost entirely by race and class, Alexander explained to students during the discussion.

The students talked with Alexander about the scope of the problem. Alexander said there is no way to reconcile the system of mass incarceration with forgiveness, redemption or compassion – the types of values that communities of many different faiths all value.

“Even after a prisoner has been released, they have no clear path towards redemption,” Alexander said.

Mass incarceration is a classic Catch 22. People have to survive, but if they are unable to do so in a legal economy, they will find other means. Then these criminals are punished again and are branded as repeat offenders. At this point, the current system locks them up and throws away the key, explained Alexander.

Convictions for non-violent crimes, and relatively minor drug offenses, have accounted for the bulk of the increase in the prison population since the mid-1980s.

Alexander hopes that these discussions challenge people to rethink those who have been characterized as criminals.

“We’ve all broken or violated a law,” Alexander said. “We need to be honest about how we got to this place, be willing to have honest conversations that many people would prefer to avoid, so we don’t find ourselves perpetually trapped.”