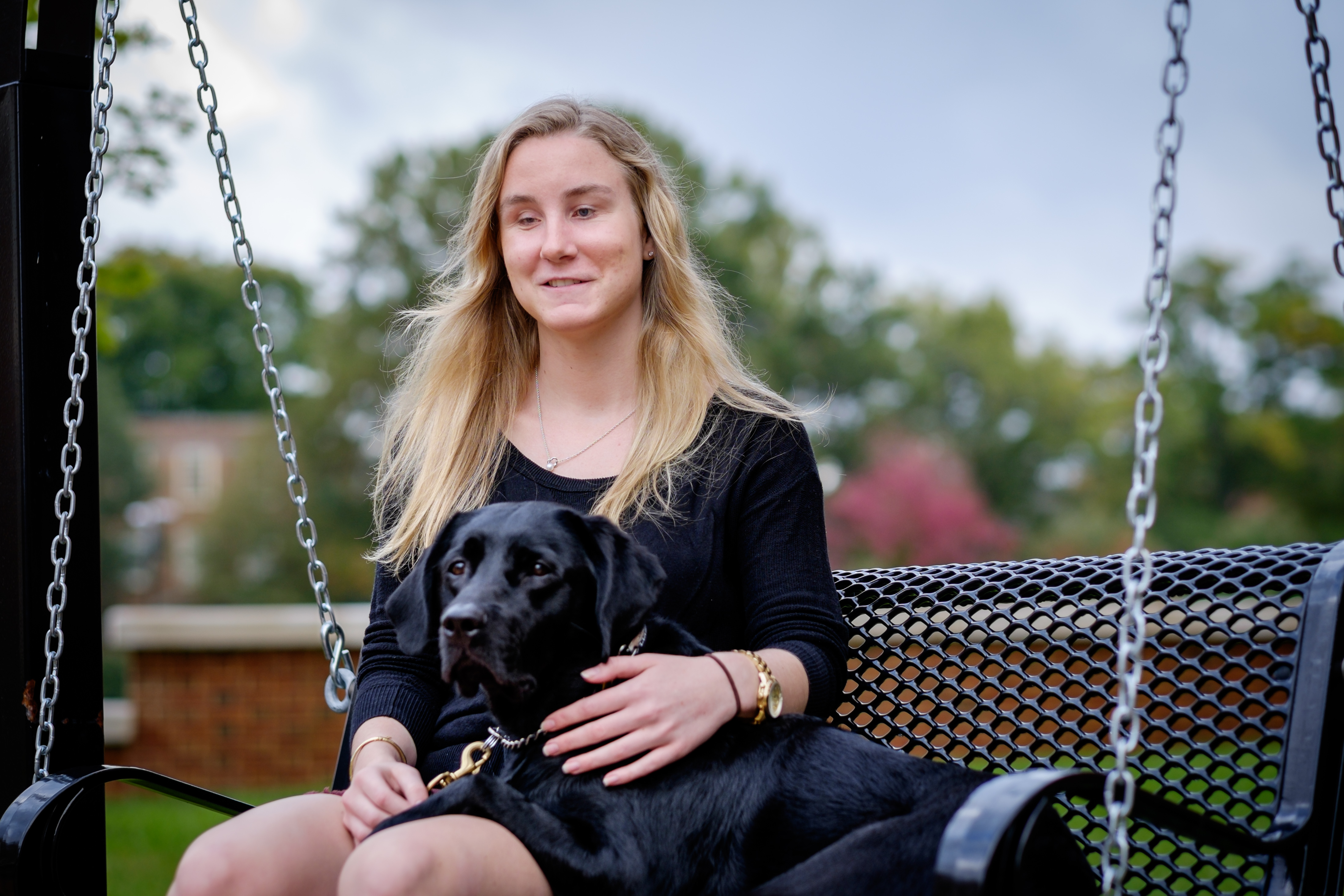 Kathryn Webster listens to her computer spit out a rapid-fire stream of numbers and symbols in a metallic voice.

Webster featured in the news

Despite losing her vision three years ago due to complications from the flu, Webster entered Wake Forest last fall with the specific goal of pursuing a dual degree in mathematics and business. Her future goal is to become an actuarial scientist, someone who applies mathematical and statistical methods to finance and insurance, particularly to assess risk.

“I knew it was going to be a struggle but I wasn’t worried enough to step back from it,” said Webster, now a sophomore. “There are always obstacles in life. You just have to come up with ways to get around them.”

Webster was determined to make sure her lack of sight would not get in the way of her vision for the future.

Robert Erhardt, an assistant professor of mathematics who taught Webster’s statistical modeling class, was initially concerned his and other math classes might be outside the realm of possibility for Webster due to the graphs, scatter plots and other forms of visual data students are required to work with.

“When I found out Kathryn wanted to take Statistical Modeling, I spent quite a bit of time on the internet searching for an example of a blind student who had taken something similar and how they did it,” Erhardt said. “I still have yet to find a student in the world who has done so.”

With little to go on, Erhardt and Michael Shuman, associate director of the Learning Assistance Center, set out to devise a novel suite of technologies to help Webster do her homework, study for tests and take exams.

“I knew this was going to be a unique challenge from the start,” said Shuman, who manages assistive technologies for the university. “Logistically speaking, a braille textbook was out of the question. Additionally, we had to piece together a way for Kathryn to analyze data in visual graphics. If it had been done before, we were not finding it.”

Shuman and Erhardt eventually decided Webster would have to learn the complex mathematical language LaTeX as a means to read and write mathematics.

“LaTeX is essentially strings of code a mathematician uses to make equations and problems appear like they do in a textbook,” Shuman said. “The really impressive thing was that Kathryn was able to learn it in a few weeks over winter break.”

Webster now uses an e-reader and LaTeX to listen to equations and symbols that appear on a page. When she is given a problem, her e-reader reads it aloud in LaTeX. She can then solve it and upload the answer back into her e-reader when she is finished. 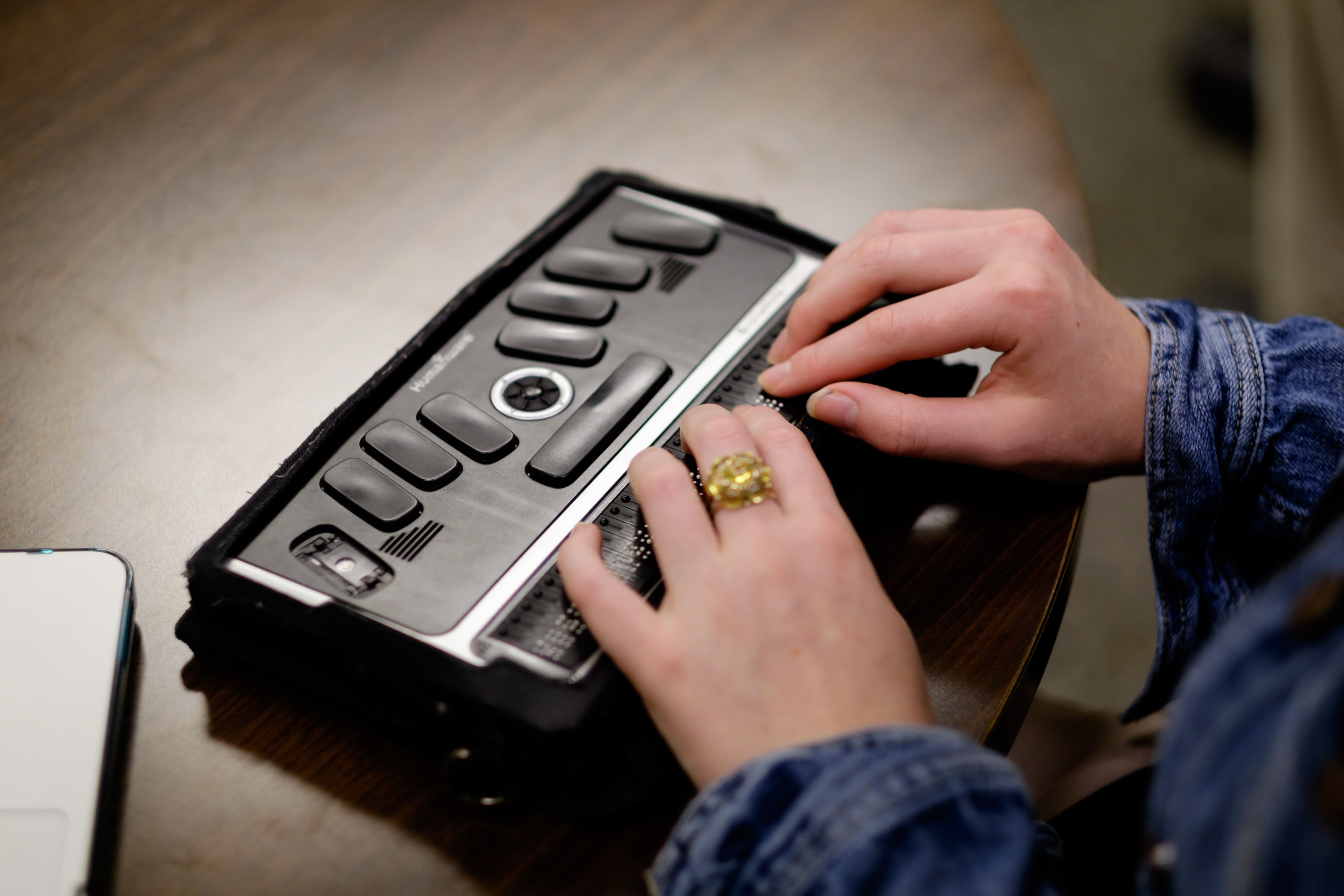 When presented with a scatter plot or graph, Webster uses a specialized Braille embosser that creates tactile representation of the visual data she can then interpret via touch.

“I can feel the overall shape of points and then make a decision on what the data shows,” Webster said.

Even though the array of technology Webster now uses with ease was not available this time last year, she wasted no time putting it to good use. She did well in Statistical Modeling and spent part of the summer speaking about her unique experience at meetings of the National Federation of the Blind.

“I probably ended up studying statistics for about 12 hours a week at the beginning of the semester but it was totally worth it,” Webster said. “The best part for me is proving to myself I can be a statistician even though I can’t see a computer screen.”

Webster will continue to use the technologies Erhardt and Shuman cobbled together as she works her way towards a math and business degree. This fall she is taking Calculus with Analytic Geometry. They are all hopeful that their relentless pursuit of a solution will benefit other students as well.

“I feel really blessed to have had this opportunity and to have worked with Rob and Michael,” she said. “It really goes to show you that if you put your mind to it, anything is possible.”

In addition to providing academic support to all Wake Forest students through coaching and peer tutoring, the Learning Assistance Center (LAC) exists to enable students with disabilities to experience equal access to the academic, social, and recreational activities and programs at the University.

“These accommodations must extend through every major and concentration on campus,” said LAC Associate Director Michael Shuman. “Technology plays a key part in providing accessible education for all.”

Though Wake Forest is a smaller institution than other similar private schools, the University still has a number of undergraduates with disabilities who request accommodations, like Kathryn Webster. Though Webster brought some of her own assistive technology with her to campus, Shuman was struggling with a novel way of representing visual data for her related to her math courses.

Enter the embosser – a device that literally prints the tactile raised graphics onto paper. Shuman said his office has spent approximately $5,000 on the Braille embosser Webster uses. The graduate students LAC employs to assist with creating electronic versions of her texts and embossing materials also use a high-speed scanner and optical character recognition software purchased a few years ago. Webster also relies on Sara Reinke, a first-year graduate student in mathematics hired by the LAC who works as a liaison between the professor’s material and the additional learning technology.

“I often purchase other assistive technology, both low tech and high tech, as needed to help with providing access to classroom materials,” Shuman said. “Being able to help Kathryn achieve her academic goals and come up with technology to help her has been very fulfilling.”