The 50th Lovefeast: A celebration around the world 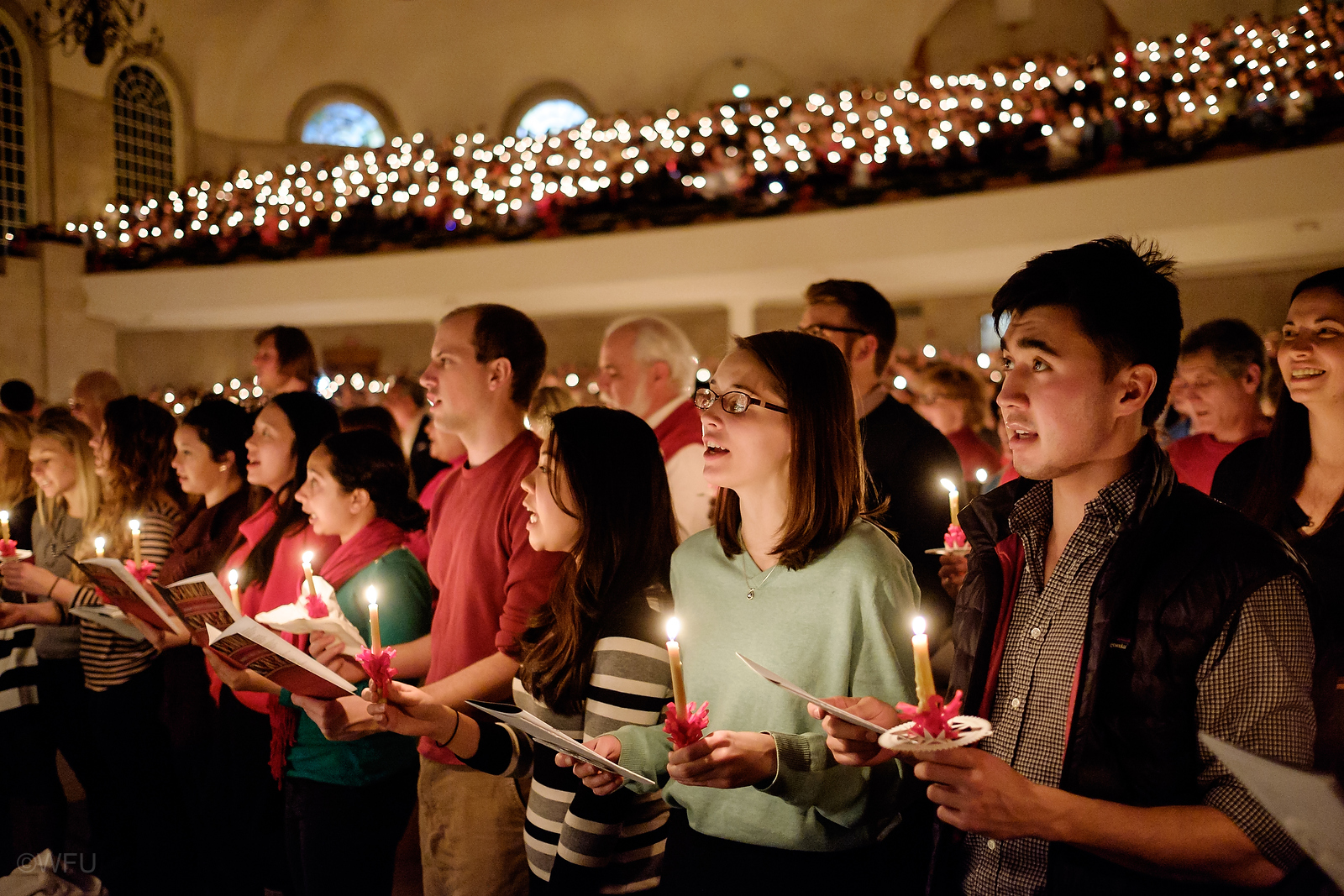 More than 2,200 gathered in Wait Chapel Dec. 7 to celebrate the 50th Annual Wake Forest Lovefeast. Others joined by video that was streamed live for viewers around the country, and the world.

When Moravian student Jane Sherrill Stroupe (’67) organized the first lovefeast at Wake Forest University in 1965, she never dreamed that it would grow into a University tradition or the largest Moravian-style lovefeast in North America.

The first year, the service was held in Davis Chapel with hopes that a few students would attend. By the second lovefeast, Stroupe planned for 150 students.

“When more than 200 students came, we had to turn some away,” she said. “Participants then tore their buns in half or gave their coffee away, so that all in attendance could experience the feast.”

The service was then moved to Wait Chapel and attendance has continued to grow ever since.

Celebrating near and far 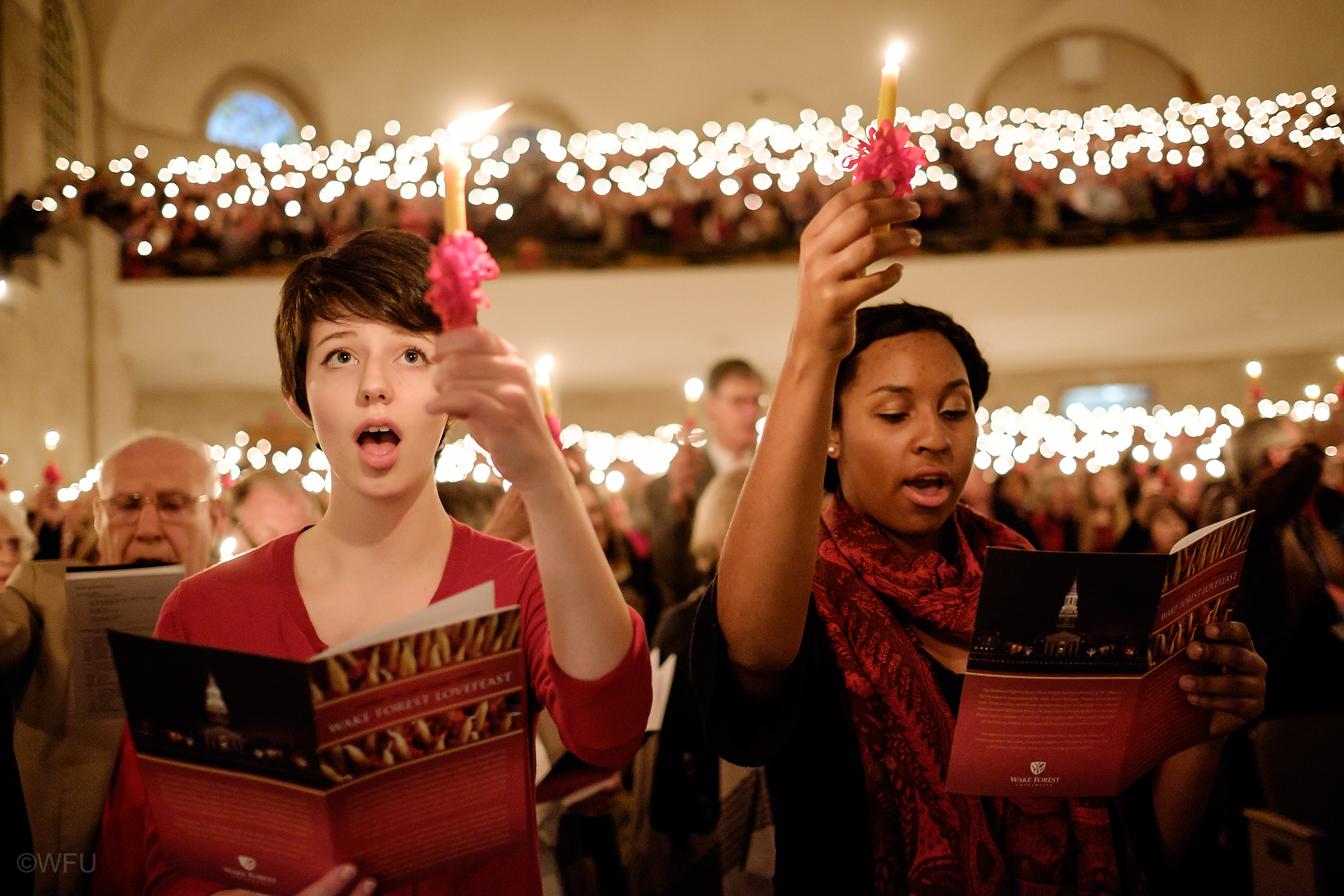 “I had no idea what a lovefeast was,” she told the Winston-Salem Journal (read the front page story here). She loved it so much that she came back for the 50th. “It was just so much fun.”

New this year, the University created lovefeast kits to enable those far from Winston-Salem to host a lovefeast at home. Wake Foresters ordered the kits online prior to the lovefeast and followed along with help from the livestream or by downloading the program. The University sent hundreds of kits to families from 32 states and seven countries, including Uganda and the Netherlands. Alumni groups gathered around the country, including at the old campus in Wake Forest, N.C., as well as at the Charlotte Center and in two cities in Texas.

University Chaplain Reverend Timothy L. Auman led the call to worship and reminded the community that they were at the 50th Annual Wake Forest Lovefeast or celebrating from afar “because of one student’s vision and a chaplain’s support.”

The University wanted all Wake Foresters to be able to experience the lovefeast. By offering the livestream (archived at lovefeast.wfu.edu), the service has been viewed more than 4,000 times. Those in attendance or viewing from other places were also encouraged to share their lovefeast experience by using the hashtag #wfulovefeast on social media.

As Christmas songs and hymns were sung, more than than 60 “dieners,” a German word for “servers,” distributed traditional Moravian pastry buns and cups of sweetened coffee.

Before partaking in the feast, Stroupe gave the traditional Moravian blessing.

“The blessing is a very special part of service, so it means a lot to have that as part of my role,” she said.

Soon the lights were dimmed and the Chapel slowly filled with light as thousands of beeswax candles were lit one by one and all participants sang.

“It is amazing the lovefeast has grown to be a Wake Forest tradition,” Stroupe said. “To think something I organized twice has now happened 50 times is very special.” 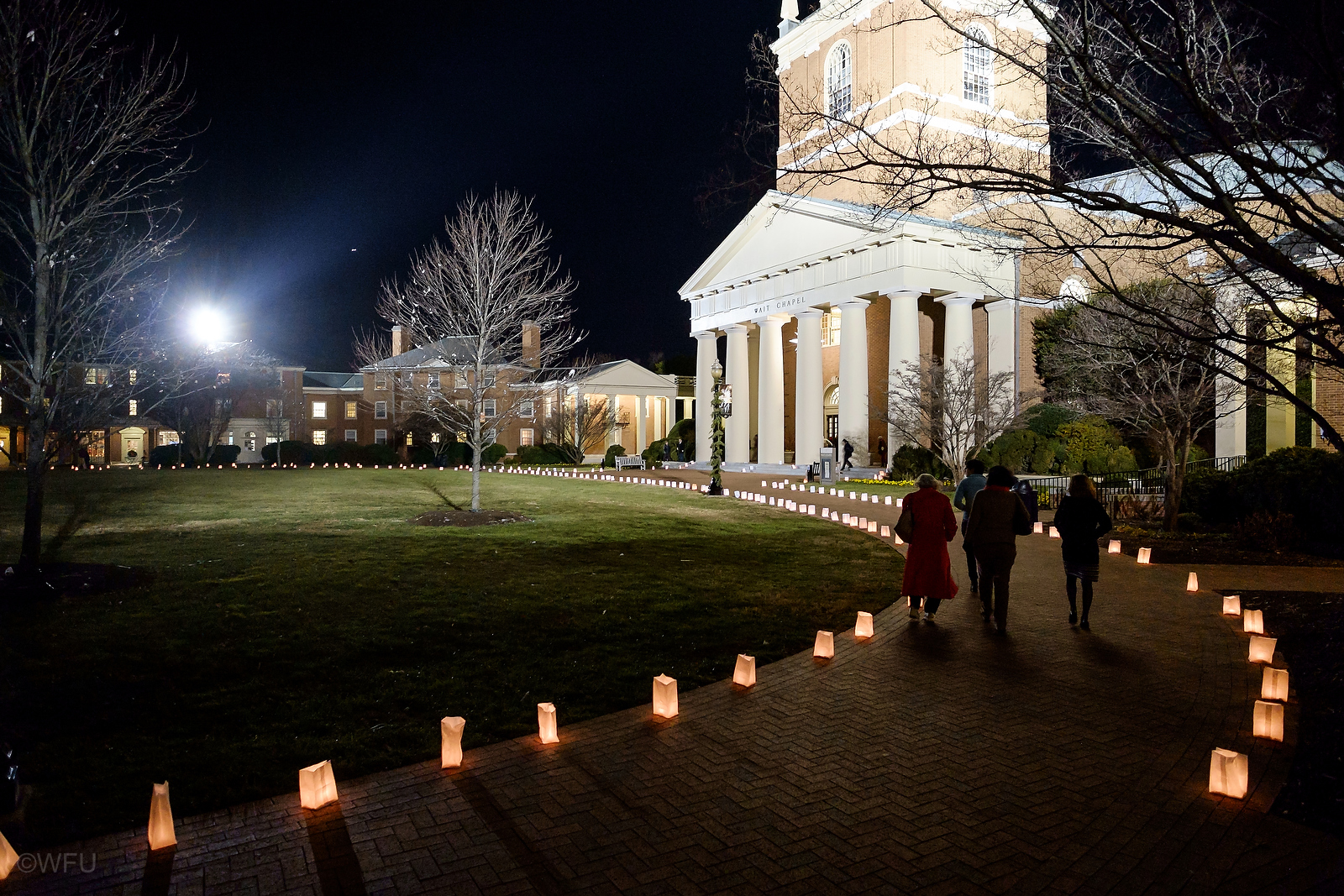 Hearn Plaza was lined with luminaries provided by the Office of the President in recognition of Wake Forest University Trustees and in honor of students who annually donate more than 600 hours of service to the Winston-Salem Ronald McDonald House.