Committed to making a difference 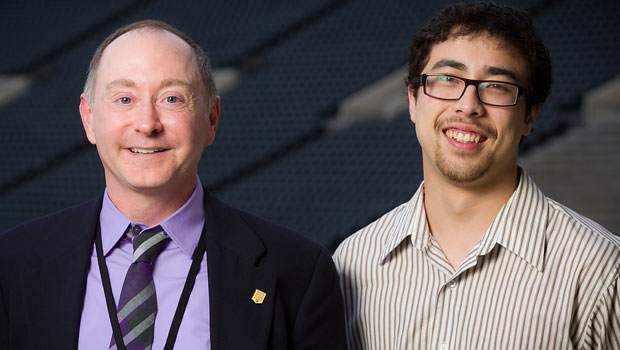 The award is traditionally presented to a professor or administrator and a student from both Wake Forest and Winston-Salem State University (WSSU) who exemplify King’s qualities and promote diversity within the community. This year, one campus leader and two students were recognized at Wake Forest.

Hu Womack’s activity level on campus is “bustling.” Matt Williams, associate director of marketing and communications in Wake Forest’s career development office describes Womack perfectly. “His personality is as bold as his red backpack, and he greets all members of the Wake Forest community with a warm ‘hey’ and a big smile.”

In addition to his work as an instructional librarian, he is a faculty fellow for South Hall and an academic adviser. He hosts a Thanksgiving lunch for students unable to travel home for the holiday season, works to create programs that are helpful and engaging to first year students and shares his time and energy supporting and mentoring members of Wake Forest’s LGBTQ community. He is beloved by students, faculty and staff alike for his helpfulness and cheerfulness and his commitment to building a community that values everyone.

“Hu works tirelessly to help others in our community, and it’s through this service that he’s been able to impact so many lives, particularly students,” says Williams. “He never does anything without thinking about how it will impact our community for the better. He gives without expectations.”

Womack, who earned his undergraduate degree from Wake Forest in 1990 and his MBA in 2000, has been a full-time employee in the Z. Smith Reynolds library for more than 20 years. 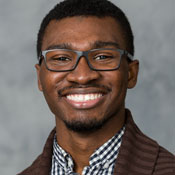 Rolle, a politics and international affairs major, is an active leader in the Roosevelt Institute at Wake Forest, a student-led, student-run public policy organization dedicated to progressive policy change and idea empowerment. He is also an associate editor of the Wake Forest Journal of International Affairs and a resident adviser. On the opening page of his Public Engagement Fellow ePortfolio, Rolle describes himself as having a love for all things intercultural, interdisciplinary, and intersectional, and a passion for making the world a better place.

“Nehemiah exercises critical thinking skills, cares for his fellow students and community, and engages with issues affecting the Wake Forest community and beyond,” says Norma-May Isakow, co-director of Wake Forest’s Pro Humanitate Institute. “He works tirelessly for policy change to create an open, just and equal society on campus and beyond.”

LeDuc, a Wake Forest debate team member from Spokane Wash., has spent four years honing his skills in public discussion — helping people think through the outcomes of various policies and positions. His skill with words has inspired others to share their thoughts and explore ideas.

“There is no way you can hold a conversation with Joe LeDuc and not learn something new or at least question something you thought you were sure of before,” junior Brittany Salaam says. “He actively engages with his community and encourages others to do the same.”

A politics and international affairs major, LeDuc also serves as a steering committee member of “Forward Together,” Wake Forest’s interest group of the NAACP. He champions inclusiveness and justice for all members of the campus community — inspiring others to recognize their own ability to make their community a better place not just for themselves but also for humanity.

Faculty, staff and students at Wake Forest and WSSU submit “Building the Dream” award nominations for their respective universities and a committee of representatives from each school selects winners. The recipients were recognized at an annual banquet celebrating Dr. Martin Luther King Jr. held at Wake Forest on Jan. 20.