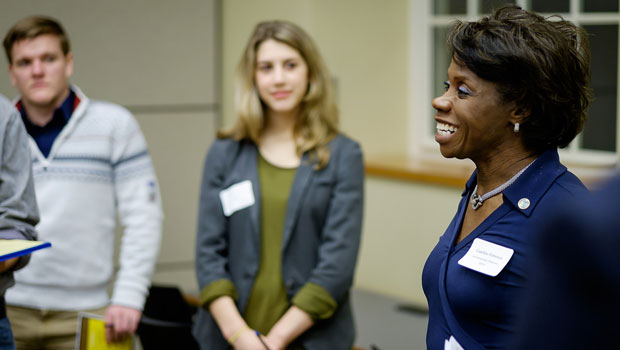 The STEM Slam was a combination of speed dating and career networking – “speed networking,” as described by Ashley Phipps, the University’s employer relations coordinator. The STEM Slam, she said, began with a challenge, which created an opportunity, which became an event.

STEM is the acronym for “science, technology, engineering, math” and also health-related fields. It applies to academic disciplines, as well as to companies in those fields. 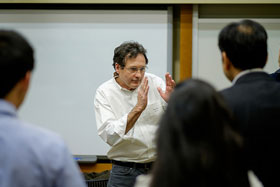 The challenge of matching STEM companies that have jobs with qualified students can be complicated, because many STEM companies are relatively small and may not have a lot of jobs open on a regular basis. Or they can be larger, established companies not known for their STEM positions. When they do have jobs, they may not have a chance to get together with student prospects.

So there was opportunity, but there was a matter of logistics. Both students and companies have limited time for recruitment. While large corporations may recruit throughout the year for their leadership-training programs, a small startup in a STEM field may need one chemist or Javascript programmer.

With some brainstorming in the Office of Personal and Career Development (OPCD), the STEM Slam was born: bring 15-20 companies together with STEM-oriented students for one evening to get acquainted.

The evening began in Broyhill Auditorium, where the companies gave one-minute descriptions of who they are and what they do. Then the students divided into smaller groups in nearby meeting rooms, and the companies came to them. Groups of four companies spent a total of 20 minutes in each room; the students could divide their time among as many of the companies as they wished.

“Now they can keep the conversation going,” Phipps said, “and when the companies have a job they’re looking to fill, they’ve already made some connections.”

One of the company participants was Clinical Ink, a 61-employee (and growing) technology company focused on helping the clinical research market go paperless. The company has developed modern, mobile technology to streamline the electronic data capture of documents used in clinical trials.

Doug Pierce, Clinical Ink’s president, said this was the company’s first career event at Wake Forest. “We’re looking for people with backgrounds in clinical research, in application development, in computer science … My personal opinion is, nothing beats a technical education that’s grounded in strong liberal arts education, and I think that’s what makes Wake such a great place. Even if you’re hiring a STEM student, you know you’re getting a STEM student who’s coming out of this very, very strong liberal arts education.”

The students who participated included traditional STEM majors, as well as non-STEM students who may have STEM-related hobbies or side interests. Non-STEM majors represented at the event included art, theatre, psychology and communication. Is there a place for liberal arts students in STEM companies?

“Absolutely,” said Brian Mendenhall, the OPCD’s career coach for STEM. “These companies are developing so fast that it’s no longer such a niche market. They all have needs for advertising, marketing, finance, security and vetting new employees. I think non-STEM students can find a very exciting future with a STEM company, using their skills and talents.”

Liberal Arts Majors and STEM in the news

In fact, the evening’s keynote speaker had been just such a student. Joe Sciarrino (’12) had been an economics major when he felt the pull of entrepreneurship, his minor. As a student Sciarrino received grants to create a company called Cloud Connect, a system for storing contact data in the cloud. The company won the Hobbs Award for entrepreneurial achievement and other recognition.

As graduation approached, Sciarrino had already accepted a job in wealth management, when he “totally did a 180.” He recognized his passion to be an entrepreneur in advanced technology, preferably in the Bay Area. Sales, he thought, were probably his best inroad. But he didn’t know sales. So he took a job “at the very, very lowest rung of what people would consider ‘sales’ – selling home security systems to people over the phone” from an office in Utah.

Not only did he learn sales, he set company records. “People were wondering why I was doing so well, having never sold anything before. For me it was pretty simple. I had gone to Wake Forest. I had learned how to study hard and think critically and execute.”

For Sciarrino it paid off. Less than two years out of school, he landed a sales job with Heroku, a division of Salesforce Inc., in San Francisco. (He spoke to students at the STEM Slam via Skype.) He hopes to found his own company again one day, “but what I realized is that in the interim I really need to gather a lot more skills.”

“The dream of Wake Forest is to enable you for success, regardless of what you’re doing,” Sciarrino told the students. “Seek to be successful before seeking to be impressive,” he said. If you work hard and succeed at what you need to learn – as he did with sales – companies will be impressed and want to hire you.

Following your passion can be extremely challenging, he said, “but I think that any student is up for the task once they have a Wake Forest degree.”