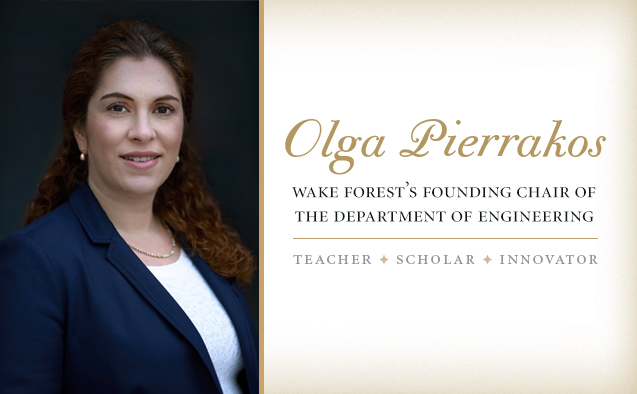 Wake Forest University has appointed Olga Pierrakos as founding chair of the Department of Engineering, one of Wake Downtown’s new anchoring academic programs, which will begin offering classes this fall.

Pierrakos currently serves as Program Director of the Division of Undergraduate Education at the National Science Foundation (NSF) in the Directorate of Education and Human Resources. At the NSF, she manages a $100 million portfolio to strengthen science, technology, engineering, and mathematics (STEM) education at two- and four-year colleges and universities by improving curricula, instruction, infrastructure, advancing research and knowledge, diversity of students and faculty, and efforts of institutional transformation. Her primary focus is on managing a portfolio of investments in engineering education and engineering education research.

She is also a founding faculty member and Associate Professor of the Department of Engineering at James Madison University (JMU), where she helped establish the department starting in 2008. There, she touched and impacted many aspects of the nascent engineering program including co-leading the initial development of the engineering design course sequence which serves as the spine of the curriculum, taught a wide range of courses, led the integration of problem-based learning across the curriculum with NSF support, mentored students in a liberal arts environment, and oversaw an exemplary assessment and ABET accreditation process — all of which laid the foundation for her pivotal role at Wake Forest.

“Starting a new engineering program is typically a once-in-a-lifetime opportunity and to be honored with doing that twice is a rare opportunity indeed,” said Pierrakos.

“It is truly a privilege to establish a top-notch undergraduate engineering program that builds upon Wake Forest’s national reputation and my professional experiences.” Olga Pierrakos, engineering department chair

“I am impressed by University leaders’ vision for educating the next generation of liberal arts engineers at Wake Downtown and I look forward to partnering with faculty, staff, students and industry leaders to make our shared vision a reality,” said Pierrakos.

“Olga’s expertise in building a successful engineering department from the ground up, her deep appreciation for a blended engineering and liberal arts curriculum, and her passion for strengthening undergraduate STEM programs across higher education made her uniquely suited to fill this key leadership position at Wake Forest.” Michele Gillespie, dean of the College

“I am delighted that she will guide us through the process of developing an innovative, inclusive, and nationally recognized undergraduate engineering program,” said Michele Gillespie, Dean of the College.

As chair, Pierrakos will oversee the recruitment and hiring of outstanding engineering faculty; lead faculty in their mission of education, research, and service; create an innovative educational environment for undergraduate engineering students; and establish ABET accreditation for the first graduating cohort. She will also work collaboratively to design and outfit the next-generation engineering classrooms and laboratories at Wake Downtown, the University’s STEM-centric urban satellite campus, which opened for classes earlier this month.

“In keeping with our signature commitment to the teacher-scholar model, Olga brings to Wake Forest a combination of research excellence, vast knowledge of engineering pedagogy and innovation at the national level, and the sleeves-rolled-up experience of implementing a first-rate program,” said Provost Rogan Kersh.

“As a transformative leader and champion of the liberal arts, Olga will lead us brilliantly into a new era of engineering in the spirit of Pro Humanitate.” Rogan Kersh, provost

Pierrakos’ research expertise is in biomedical engineering, sustainable energy systems and engineering education research. At JMU, she has worked with students to characterize the flow past prosthetic heart valves and investigate novel metrics for assessing the performance of cardiac health and prosthetic heart valves. She has also mentored students to design sustainable energy technologies such as devices to reduce drag on vehicles and devices to produce water from the humidity in the air. With support from the NSF, she led an effort to establish a state-of-the-art experimental flow diagnostics facility to enable such research. This facility has inspired learning among hundreds of undergraduate and K-12 students. As an engineering education researcher, working with psychology for about a decade, she has written extensively about diversity and inclusion in engineering, investigating identity formation and motivation of engineering students, engineering education pedagogy, as well as investigating cognitive and non-cognitive aspects of complex problem solving in a variety of contexts.

Pierrakos has been the recipient of several prestigious awards, including the NSF CAREER Award (2009), given to a select few junior faculty nationwide who excel as teacher-scholars, and the State Council of Higher Education for Virginia (SCHEV) Outstanding Faculty Award in the category of “Rising Star” (2013). Additionally, students have recognized her as an innovator, engaged teacher and mentor. In 2015, students chose her to receive the inaugural “Innovation Award” for an engineering faculty member and nominated her as “JMU Woman of the Year” for being an inspirational role model.

Pierrakos points to innovation and inclusion as the cornerstones for achieving transformation and excellence. She has a particular passion for mentoring students, including those frequently underrepresented in engineering fields such as women and ethnic minorities.

“The motivations to diversify the student population in engineering have been at the core of what I’ve experienced as a woman going through this journey as an undergraduate student, graduate student and even as a faculty member,” said Pierrakos, who was born in Greece and came to the U.S. at the age of ten. “Hiring the right people who value and respect diversity of expertise and diversity of people and experiences will be key in ensuring a sense of belonging as well as innovation.”

Toward diversity in STEM

Amanda Griffith, associate professor of economics, has studied the experiences of women and minorities in STEM programs. Her findings: