Media Advisory: WFU Board of Trustees Announces First Female to Serve as Chair

The members of the Board of Trustees of Wake Forest University are pleased to announce its next class of Trustees and Officers, for the term beginning July 1, 2015. 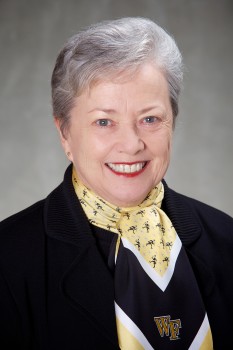 “Wake Forest has been fortunate to have strong visionaries at the helm of the Board of Trustees. Our new chair, Donna Boswell, is just such a leader,” said Wake Forest University President Nathan O. Hatch.  “I am pleased to welcome Donna to the role of chair, for I am confident that her proven integrity, passion for higher education and unparalleled commitment to Wake Forest will continue to serve the Board and our University well.”

Boswell lives in Winston-Salem and recently retired as a partner in the Health Group of the law firm Hogan Lovells US LLP, where she advised hospitals, academic medical centers, research companies and manufacturers on compliance issues. Before joining her law firm, Boswell was a professor at Wesleyan University. Boswell was elected a member of the Wake Forest University Board of Trustees in 2004 and has served the past three years as Vice Chair. She received her BA and MA from Wake Forest and a PhD from Pennsylvania State University; she earned her JD from the University of Pennsylvania Law School.

Burchfield (’76) of McLean, VA, recently joined the international law firm of King & Spalding as a partner in its complex litigation practice in Washington, D.C. He is a trial and appellate lawyer who represents corporate clients in antitrust, class action, securities fraud and other commercial cases. Burchfield was first elected a member of the Wake Forest University Board of Trustees in 2004 and will begin his third term as Vice Chair on July 1. He earned a BA from Wake Forest and a JD from George Washington University.

Roach (’80, JD ’82) of Raleigh, NC, is a partner at Smith Anderson Blount Dorsett Mitchell and Jernigan in Raleigh. He heads the Corporate Group with a practice focused on capital markets, mergers and acquisitions and advising boards and special committees. Roach was first elected a member of the Wake Forest University Board of Trustees in 2010 and will begin his first term as Vice Chair on July 1. He earned both his undergraduate degree and JD from Wake Forest.

Flow was first elected to the Board in 2005 and will be a member through the remainder of his third term, ending in 2016. He will also remain the Chair of Wake Will: The Campaign for Wake Forest Campaign Cabinet through the end of the campaign and will continue his service as a member of the Wake Forest University Baptist Medical Center Board of Directors.

“Wake Forest has advanced under the wise guidance of Don Flow, a paramount leader and my trusted friend,” said Hatch. “He has provided critical insight and offered dynamic leadership to the Board of Trustees and our community. He has also inspired us with his energy and enthusiasm as he works for what is best for Wake Forest. Don leaves the Board in a strong position to uphold tradition and pursue innovation.”

Joining Trustees currently serving on the Board, other returning members elected to a new term include:

Wake Forest University combines the best traditions of a small liberal arts college with the resources of a large research university. Founded in 1834, the school is located in Winston-Salem, N.C. The University’s graduate school of arts and sciences, divinity school, and nationally ranked schools of law, medicine and business enrich our intellectual environment. Learn more about Wake Forest University at www.wfu.edu.