A journey to understanding 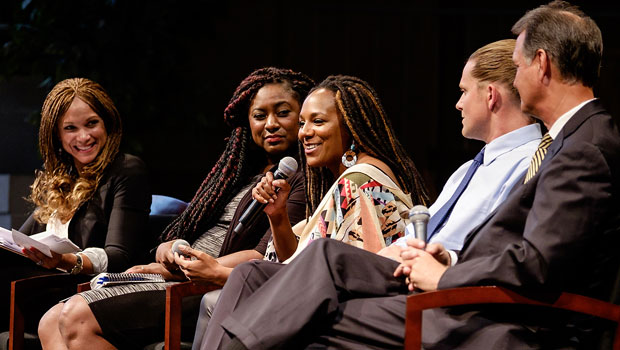 The student-initiated event was co-sponsored by Wake Forest’s chapter of the Kappa Alpha Order fraternity, the Division of Campus Life and Office of Diversity and Inclusion with support from the Diversity Collaboration Fund.

“The murders of nine innocent people the evening of June 17 in Charleston, S.C., led to an outcry that focused national debate on symbols of the Confederacy as reflections of inequality and racism in America today,” said Edward Tillinghast, president of Wake Forest’s chapter of Kappa Alpha Order, who also wrote an op-ed about the event in the Old Gold & Black. 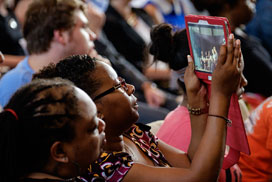 Tillinghast delivered opening remarks for the discussion saying he hoped the listening and learning opportunity offered by the panelists would begin a journey in understanding to continue throughout the school year and beyond Wake Forest.

Filmmaker, singer, songwriter and community organizer, Bree Newsome started the conversation describing what motivated her to climb the flagpole and remove the Confederate flag flying at the state capitol in Columbia, S.C. “To see the Confederate flag flying at full staff while the American flag and the state flag of South Carolina were at half staff…that was a breaking point for me. There was a lot of discussion about the legislature taking down the flag, but we felt, what is there to wait on. It was important for the people to really come together and make the statement ‘we are going to take the flag down right now.’”

“The flag had worn on everybody in our state,” said Katon Dawson, former chairman of the South Carolina Republican Party, president of Dawson Public Affairs and a leading voice in favor of removing the flag.

“An academic environment is the ideal place for a thoughtful and thought-provoking conversation about the intersection of race, symbolism and the South,” said Harris-Perry. “College is suppose to be hard, and conversations here are suppose to be uncomfortable.” 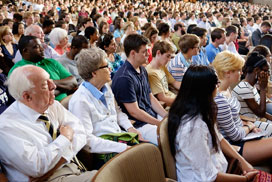 More than 1,000 people attended the panel discussion on the Confederate flag.

When asked how white people could help support change, James Ian Tyson, a grassroots organizer arrested alongside Newsome after they removed the flag, said it is important as a white person who wants to help to become educated on the issues and involved with others different than you. “Do background work so you can actually be of help and of service when your community calls you to be of service. In this movement you wait to be asked. You step back and let other people step forward.”

Nearly 200 students signed up for small group dialogues held after the panel discussion. “Students want the opportunity to talk to each other about these issues,” said Adam Goldstein, dean of students and associate vice president for campus life. “They are eager to continue moving our community and society forward.”

Panelist Alicia Garza, co-creator of #BlackLivesMatter said it is not important that everyone have the same experiences in life because people are all very different. “What is important is that we can unite on a common set of values that move us forward together and that this happens in practice and not just in rhetoric.”