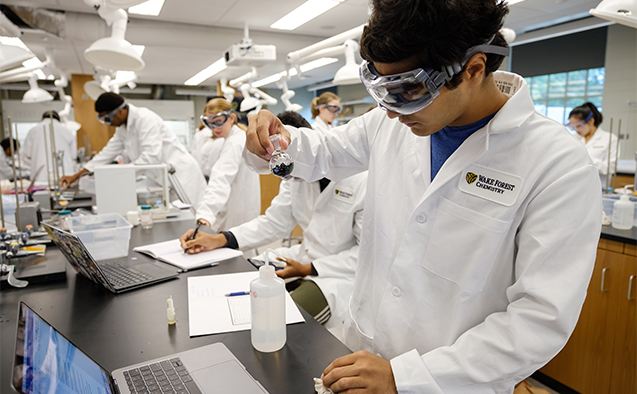 Chemists study the ways in which substances interact, combine and change. Wake Forest’s newly renovated Salem Hall is the perfect place for those activities to happen both in the lab and among faculty and students.

With the completion of a 55,000 square foot, $21 million renovation, Salem Hall has had a total makeover. Labs are much bigger, with most being more than three times their original size. New portable furniture and equipment provide greater flexibility of space.

Salem Hall, originally built in 1955 on the Reynolda Campus, is the longtime home to Wake Forest’s chemistry department. The original cost of the building with equipment was just over $1.2 million, and the building was home to biology, physics and chemistry.

In addition to its being crowded, “when the building opened, there were a lot of small rooms of 600 square feet or less,” said chemistry professor Mark Welker. All the lab rooms in the new building are now at least 2,000 square feet.

“Removing walls is the best thing for me,” said chemistry professor, department chair and dean of graduate programs Bradley Jones. “The spaces are open, airy and filled with light from windows and glass walls. Teaching labs that were originally designed for 24 students per room now occupy what used to be two lab rooms and a prep area. Each now holds 48 students in an open space. Similarly, the research labs have an open floor plan with shared student space. Collaboration will be natural now.” 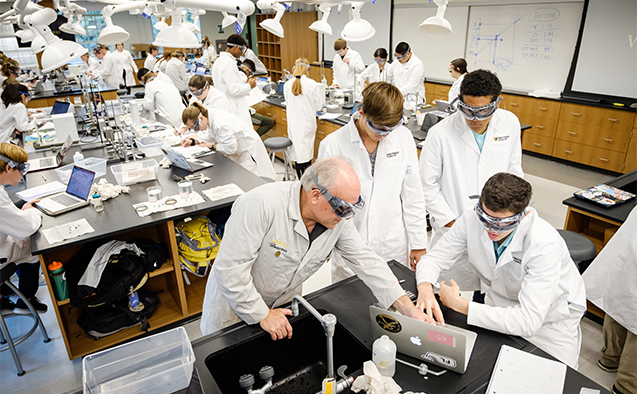 “I’m excited about the new labs and study spaces,” said senior biochemistry and molecular biology major Gina Li. “What I remember from my freshman year in Salem Hall is my friends and I talking a lot about how the building and labs needed updating. First-year students starting this fall will definitely enjoy a better experience learning chemistry in this newly renovated space.”

“The classroom is the initial location a student encounters new chemistry course content, some of which is complex and challenging. Having updated classrooms and the newest materials and working spaces will be pivotal towards improving student interest and engagement.” Henry Bonilla, senior chemistry major

In 2017, the chemistry department began offering a concentration in medicinal chemistry and drug discovery within the chemistry major, providing a new path to an American Chemical Society certified B.S. degree for students interested in health-related fields, biomedical sciences and pharmacology.

In conjunction with the biology department, a new interdisciplinary degree was launched in biochemistry and molecular biology to enable students to develop a conceptual understanding of and build practical skills to address increasingly complex biological, biochemical and biomedical challenges.

“The renovations to Salem Hall, along with the opening of Wake Downtown last fall, continue our commitment to providing our faculty and students with state-of-the-art spaces that foster cutting-edge research and an engaged liberal arts education. Salem Hall now offers bright teaching spaces with floor-to-ceiling whiteboards and open concept research labs that encourage collaboration between students and faculty-led research groups,” said Dean of the College Michele Gillespie. “With its modern design and large gathering spaces, Salem Hall promotes a sense of community and a place for our exceptional students and teacher-scholars to gather and share ideas both inside and outside of the classroom.”