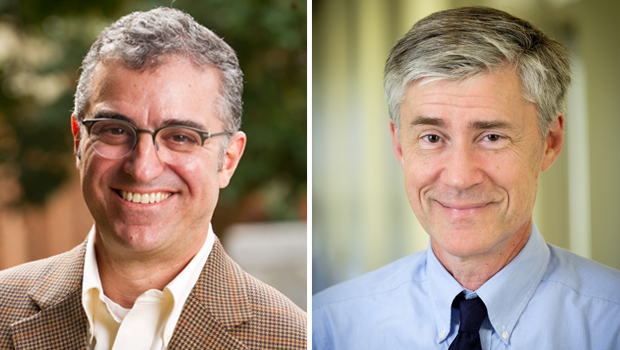 Wake Forest University Professors John Knox and Justin Catanoso are attending the United Nations conference on climate change in Paris, as representatives from more than 190 countries seek to work out a new international agreement on climate change.

Known as COP21, the 21st Conference of the Parties is the annual meeting of all countries that want to take action for the climate. The conference started Nov. 30 and continues through Dec. 11. Knox and Catanoso leave this week.

Knox is an internationally recognized expert on human rights law and international environmental law and serves as the UN’s Special Rapporteur on human rights and the environment. Catanoso is director of the university’s journalism program and is a veteran journalist supported by the Pulitzer Center on Crisis Reporting. Both serve as board members for Wake Forest’s Center for Energy, Environment and Sustainability and both have been busy raising awareness leading up to COP21 about why the Paris talks are so important.

“What makes it a little bit unusual is that each country will be deciding for itself what it can do,” said Knox. “There will not be a one-size-fits-all type of agreement.”

Before Thanksgiving, Knox and Catanoso hosted “Roadmap to Paris: Your Guide to the International Climate Talks”  on campus, discussing the likely trajectory of these climate talks. They are both encouraged that this year’s talks will result in real impact as the largest countries responsible for carbon dioxide emissions — United States, China, India and the European Union — among others, are on board. A likely agreement will chart a path toward the world’s reduced reliance on coal, oil and gas and expanded use of renewable energy such as wind and solar power.

To review the available coverage and learn more: