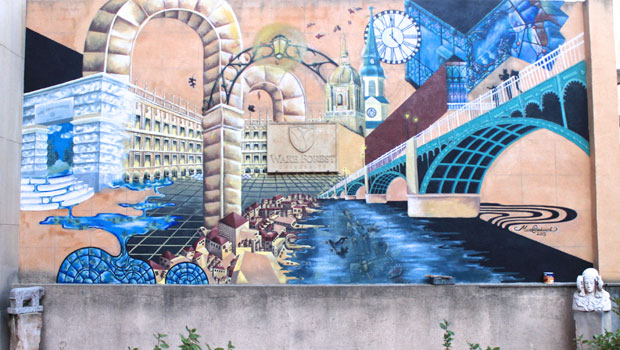 While studying abroad this semester, sophomore and Norfolk, Va., native Meredith Cheatwood painted a sprawling wall mural in Spain that bridges connections between Wake Forest and one of the oldest universities in Europe.

“The design demonstrates the connection between Wake Forest University and the city of Salamanca, and more importantly, how location defines experience,” says Cheatwood. “Because my work is often geometrically motivated, I chose to exhibit this relationship through the unique architectural elements the two places possess. The composition blends the most recognizable aspects of Wake Forest’s campus and Salamanca’s historic city.” 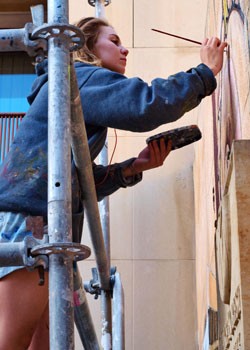 Cheatwood’s Spanish professor, Candelas Gala, suggested that Meredith consider painting a mural in Salamanca when she learned of her student’s interest in art and saw her work.

“When Meredith signed up for two of my Spanish courses, we talked about her interest in art. I asked her to show me some of her work, and I was totally impressed with what I saw: an intricate game of geometric lines forming a harmonious whole,” says Gala. “When Meredith applied for the Salamanca program, it immediately occurred to me to propose that she paint a mural on a wall surrounding the terrace of our Wake Forest Center.”

Gala says she and Cheatwood landed on a design that would fuse features of both the Wake Forest campus and Salamanca, to convey the connection that has existed for many years between the two sites.

For Cheatwood, the most challenging part of painting the wall was its texture. 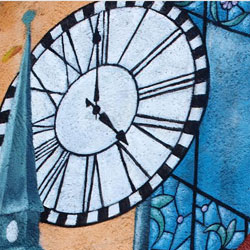 “It’s rough, bumpy and dry and the first couple strokes on a specific area always knock off an outer layer that rains down grit and sand. Needless to say, it eats up paint very quickly, tears up my brushes and makes fine lines and sharp edges very difficult to accomplish. I used a lot of masking tape for the straight edges and very fine brushes for the specific lines.”

By tackling this painting first with big chunks of color and form, the base layer acts as a sealant and fills in some of the wall’s imperfections, Cheatwood explains. Working layer by layer, the artist adds more detail every time, and with each new layer of paint the wall becomes more workable. The entire project took 194 hours.

Cheatwood is planning to double major in English and studio art with a minor in Spanish. At Wake Forest she has completed art classes in printmaking as well as darkroom photography.

“I learned a lot about self-discipline from this experience,” says Cheatwood. “Every day there was something I had to accomplish before allowing myself to quit, no matter how hot or cold the weather was, no matter how tired I was, no matter what other things I might have had planned for the day. It was a difficult experience, but this mural is my greatest achievement both artistically and personally.”

Wake Forest University ranks seventh among doctoral U.S. colleges and universities in the percentage of students studying abroad, according to the Open Doors report published by the Institute of International Education (IIE). Learn more about study abroad in Salamanca, Spain — one of Wake Forest’s most popular international programs.