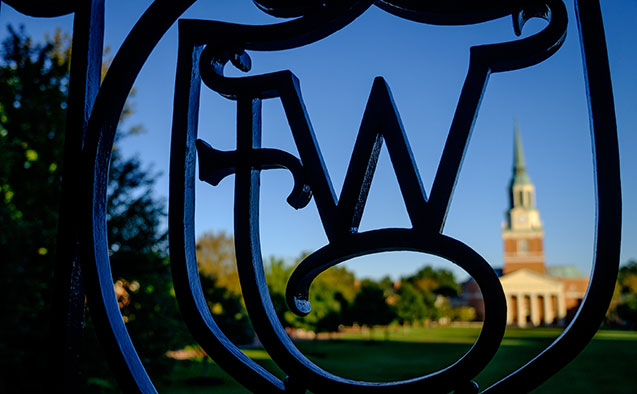 WFU research funding reaches new high
Wake Forest had an exceptional year for research funding across the board with externally sponsored awards totaling $16,486,711 for fiscal year 2015-16.

“This total represents the best in Wake Forest history,” said Lori Messer, director of the University’s Office of Research and Sponsored Programs. “The previous record was $14,336,586 in 2014.”

Researchers from across the University submitted 118 proposals, overall. Significant awards were received by research teams across different disciplines, including biology, health and exercise science, psychology and physics.

UNC system administrator to be ACE fellow at Wake Forest
Karrie Gibson Dixon, an administrator with the University of North Carolina system, will be at Wake Forest during the 2016-17 academic year as a fellow of the American Council on Education (ACE).

Dixon, vice president for academic and student success for the 17-campus UNC system, will work on a variety of projects at Wake Forest with Provost Rogan Kersh and Executive Vice President Hof Milam. As an ACE fellow, Dixon will be on campus several days each month.

Established in 1965, the ACE Fellows Program is designed to strengthen institutions and leadership in American higher education by identifying and preparing faculty and staff for senior positions in college and university administration. Thirty-three Fellows, nominated by the senior administration of their institutions, were selected this year following a rigorous application process.

The program combines retreats, interactive learning opportunities, campus visit and placement at another higher education institution to condense years of on-the-job experience and skills development into a single semester or year.

Greek Alumni Advisory Board established
Wake Forest University has established the Greek Alumni Advisory Board (GAAB). The board aims to serve as a bridge between alumni and the University in order to educate alumni about fraternity and sorority life today and to positively influence the student experience. Wake Forest alumna Molly Welles Lineberger (’82, MA ’15, P ’15) of Winston-Salem will serve as chair.

President Nathan O. Hatch appointed Brubaker to a three-year term to provide a faculty viewpoint in the administration of intercollegiate athletic programs. He succeeds math professor Richard Carmichael who has held the position since 2003.

As the Faculty Athletics Representative (FAR), Brubaker will act on behalf of the president and report to him, representing athletics to faculty and faculty to athletics to ensure the appropriate balance between academics and intercollegiate athletics. Major areas of responsibility include academic oversight, student-athlete welfare, compliance and representing Wake Forest at meetings of the NCAA and ACC which mandate the position.

The association represents the dedicated professionals of higher education student housing within the 10-state region. McGalliard will begin her term as president in February 2017 and continue to serve the organization as past president beginning in February 2018.