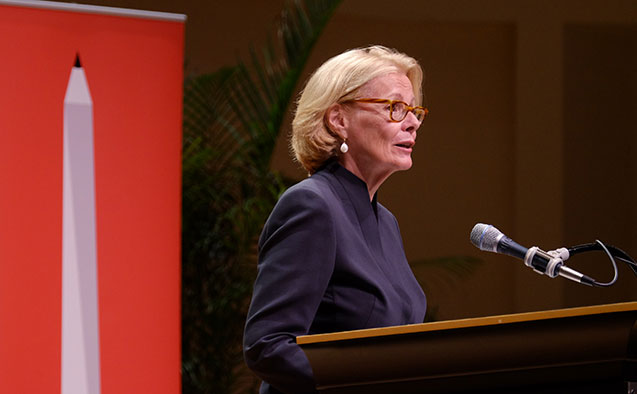 Peggy Noonan, former presidential speech writer, columnist for The Wall Street Journal, and the best-selling author of eight books on American politics, history and culture spoke on Sept. 8 to a standing-room-only crowd in Wake Forest’s Brendle Recital Hall as part of the University’s Voices of Our Time series.

With less than 60 days to Nov. 8 and the end of what has been a turbulent presidential campaign, Noonan offered a look back at former presidential leadership styles from the perspective of a writer who has helped shape both the political ideas and the language of these past presidents.

“Old-school courtesy is part of how we communicate who we are. When I do not see it, I miss it. Granting of respect, I believe, is something we lose at our peril.” Peggy Noonan

Drawing from her experiences as a former special assistant to and primary speechwriter for President Ronald Reagan and former chief speechwriter for Vice President George H. W. Bush as well as her Washington insider status, she drew connections between presidents from Reagan to Obama noting what she thought each could have, but failed to, learn from his predecessor on what it takes to lead the United States.

Presidents should be “big and visionary and wise,” Noonan said. “A great leader has more in common with an artist than an economist. They are there to see it big.…But presidents don’t get to do a dozen huge things. If they are lucky, they get to do one or two big things.”

Pushing through major changes to long-standing American institutions without at least some support from the opposite political party “never works,” she said. Referring to Obamacare and the lack of Republican support: “The change will be controversial forever.”

With a recent ABC News/Washington Post poll showing that Hillary Clinton and Donald Trump are the two most unpopular candidates in more than 30 years — controversy is likely to be on the American political horizon for some time to come.

“Whoever our next president is, that person will be disliked by more than half the people in the United States,” said Noonan. “We have entered new territory with rollicking, interesting, fascinating months ahead.”

Noonan’s most recent best-seller, “Patriotic Grace: What It Is and Why We Need It Now,” is a call for more elevated national politics. In it, she reminds readers that we must face our common challenges together—not by rising above partisanship, but by reaffirming what it means to be American. 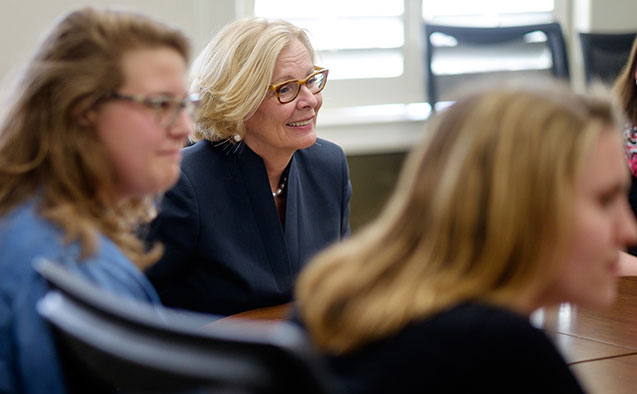 During her visit to Wake Forest, Peggy Noonan met with students participating in Wake the Vote — a yearlong program led by Maya Angelou Presidential Chair and Professor of Politics and International Affairs Melissa Harris-Perry that combines classroom and real-world political experience.

“Though there were points of political difference among those participating in the conversations, I think we could wholeheartedly agree with Ms. Noonan that it is ‘not enough to see the movie, one must read the book’ to understand others viewpoints,” said Harris-Perry.

From volunteering on the campaigns of presidential candidates to attending classes to planning community forums to organizing non-partisan voter registration efforts, the group has spent 2016 examining issues central to the presidential election.