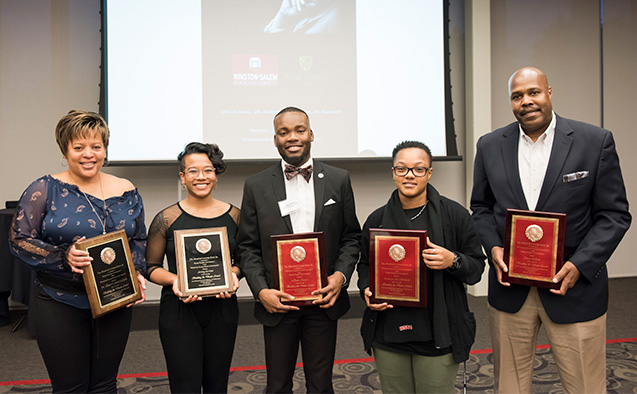 “America is great because it has the possibility to be great,” Dyson said in his talk delivered to a crowd of approximately 1,500.

“The potential for greatness is always there but you have to work towards it... You and I can join in the project to make America great by loving all people.” Michael Eric Dyson

Each year, both Universities present ‘Building the Dream’ awards to professors, administrators or students who exemplify King’s qualities and promote diversity within their communities.

“Sherri has a long record of teaching, service and research committed to confronting those practices that continue to otherize, marginalize and deny individuals their inalienable rights,” said Wake Forest sociology professor Ana Wahl, who nominated Lawson Clark. “She pulls students of color into her research, and cultivates the next generations of scholars committed to keeping social justice issues center stage.”

At Winston-Salem State University Dana Walker, coordinator of community service at WSSU received the award. Walker oversees WSSU’s Project GIVE, Getting Involved through Volunteer Efforts program. During the 2016-17 academic year, 2,144 students volunteered 42,328 hours to local agencies – an economic impact of $937,158.00. Walker recently received the Governor’s Volunteer Service Award for his work matching members of the WSSU community with non-profit organizations.

Senior sociology major Jenny Vu Mai was named Wake Forest’s student “Building the Dream” award winner. Mai led a Wake Alternative Break trip to Asheville, N.C., that focused on domestic violence and sexual assault. She interned at Samaritan Ministries, a local nonprofit providing food and shelter to the needy in the Winston-Salem community. She also served as a mentor with the Freedom School program, which provides summer and after-school reading enrichment for children who might otherwise not have access to books.

“As an administrator who has guided Jenny along in multiple community engagement opportunities, particularly in the realm of social justice education and programming, I have seen first-hand Jenny’s ability to lead and inspire her peers to engage,” said Fahim Gulamali, who nominated Mai.

From Winston-Salem State University, William Gibson, a sophomore political science major from Charlotte and Jessica Lee Johnson, a senior psychology major from Greensboro were both recognized with “Building the Dream” awards.

Gibson has been elected twice as president of his class (freshman and sophomore). He is one of 62 students nationwide named to the 2017-18 class of White House HBCU All-Stars. At age 6, he and his father immigrated to the United States from Liberia.

Johnson is a member of the University Choir and the Burke Singers. To support herself at WSSU, she works late at night and on weekends at the library. She has hearing only in one ear and was unable to speak until she was well into grade school.

About the award and the MLK Day celebration