Americans are more divided along party lines than ever, according to a new Pew Research Center study. It’s no wonder college campuses across the country are at the center of so much political unrest.

At Wake Forest, faculty are making conscious efforts to help students get comfortable with a healthy degree of conflict as part of their academic and personal growth. Instead of shying away from studying topics that evoke strong – and often polarized – emotions, they are helping students engage in meaningful discussions across difference.

“There’s no more worthy or timely application of the engaged liberal arts than to prepare our graduates to navigate our increasingly divisive and fragmented society.” Michele Gillespie, Dean of the College and Presidential Endowed Chair of Southern History

At the Rethinking Community Conference (Oct. 19-21), Wake Forest will bring together thought leaders across the ideological spectrum to explore what it means to live in a society that is more diverse, polarized, global and virtual than ever before. Register at rethinkconference.wfu.edu.

Here’s how three College faculty are helping students invite, explore and respect diversity of thought in the classroom.

An anthropologist digs into the roots of racism

A 2017 Gallup survey of more than 1,000 American adults found that 42 percent worry a great deal about race relations in the country — up from just 17 percent in 2014.

That’s why it surprises some whenever anthropologist Sherri Lawson Clark says, “Race is a myth.”

“What people often refer to as race is actually a racial marker. Markers are dependent on the situation. A person with white skin in a group of people of color, may struggle with stereotypes associated with skin color in ways similar to people of color in environments with more whites. Similarly, poor whites are marked racially in environments surrounded by non-whites or more affluent whites,” said Lawson Clark, an assistant professor of anthropology. 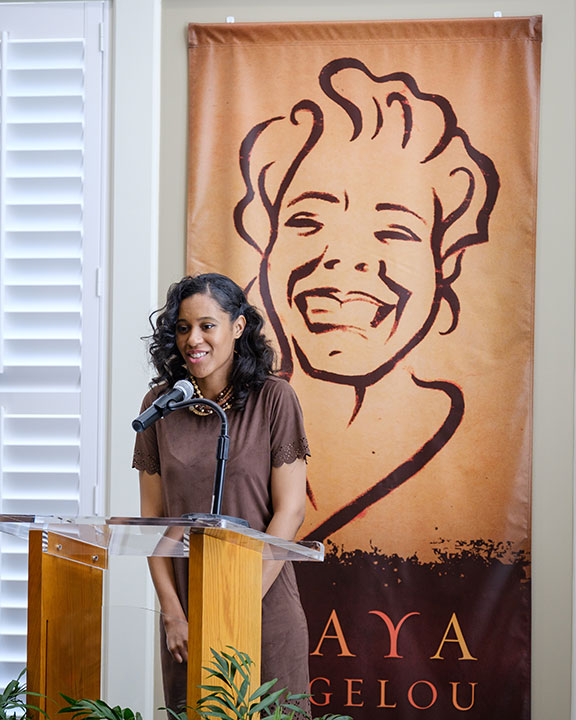 In her classrooms, where typically two-thirds of students are people of color, she creates space where sensitive issues like the origins of race and racism in the United States are discussed without judgment. On the first days, the students decide the rules of the class.

When students of color are the majority, the roles are reversed from most classes at Wake Forest, said Nia McIntosh, a senior politics and international affairs major. “And that’s an interesting dynamic because in many of my classes I might be one of the only people of color or the only woman of color. The white students are experiencing what our lives are like every day.”

The conversations in class were uncomfortable at first, admitted Cameron Silverglate (’17).

“I didn't have the first-person experiences I felt I needed to share my viewpoint. So I took a backseat and listened. It was important that others trusted me. What I learned in one semester of this class, is hard to achieve in normal conversations.” Cameron Silverglate ('17)

“One misconception I faced was the idea that when people like me with white skin describe ourselves as ‘colorblind’ that’s detrimental. We mean well by saying that skin color doesn’t matter to us. But race is salient and it impacts people so by not acknowledging skin color we propagate racial issues and inadvertently cause harm,” said Silverglate, a research fellow studying leadership and character at Wake Forest. 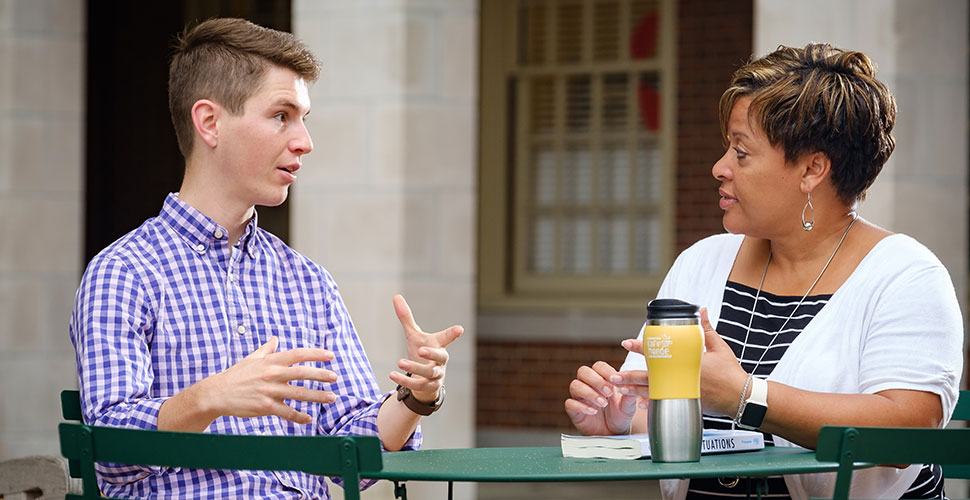 Silverglate said he took the class because he wanted to learn a vocabulary to engage in discussions about race and racism. McIntosh was seeking better ways to communicate, too.

“I wanted to articulate my ideas and be able to answer questions based on facts, not emotion,” she said.

For Pisapia, courses flourish when people approach conversations “with openness about what we ourselves believe, and with recognition that others hold their beliefs for the same basic reason we do – because of their life experiences.” The ideal is for everyone to feel comfortable sharing personal views, while also being committed to listening while checking a natural impulse to be judgmental. “Fostering trust is key,” Pisapia said.

He works to earn this trust from student by articulating the different positions on controversial topics, while also inviting students to voice opinions they themselves do not hold. The goal is a learning environment professor and students spend time seeing the other side, and where they are comfortable voicing their passionate beliefs. 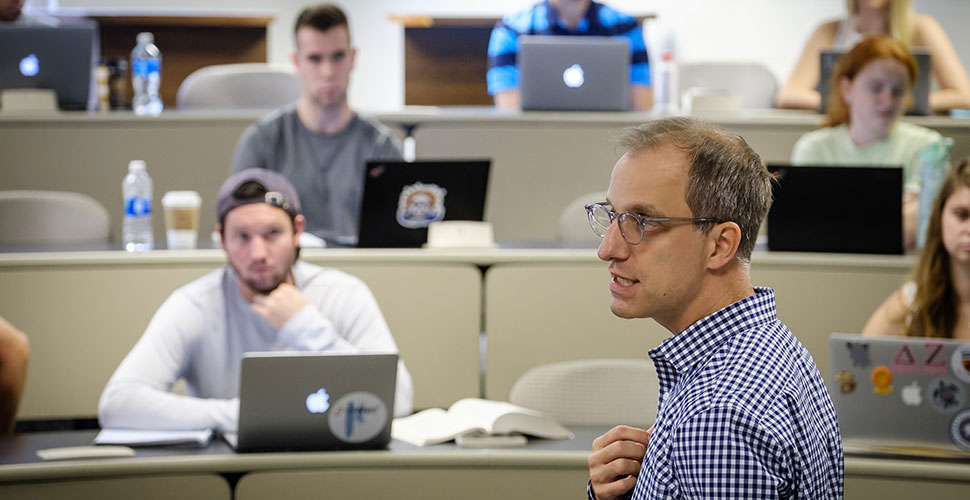 This semester, Pisapia is using an “unfolding syllabus” design. His courses have three broad semester long objectives, but the particular readings assigned and points discussed are fluid and partly tailored to the interests of the students taking the course. This approach gives him the flexibility to connect political theory and historical trends to current events, and to empower students to apply their own knowledge and experiences to the course goals.

“The day after the mass shooting in Las Vegas, Professor Pisapia led a class discussion about issues of gun control,” said senior Justin Chermol, a double-major in politics and international affairs and history. “There are not many opportunities for students to talk about this kind of serious issue for 45 minutes at one time. When students talk among themselves outside of class, the conversations are usually quick and sometimes polarizing because there’s little time to address an issue deeply.”

A recent Wake Forest University study showed that learning to talk about controversial issues while in college can inspire young adults to be more engaged citizens even 10 years later.

“While many young people shy away from political engagement because they are turned off by the extreme partisan polarization, our findings suggest that learning how to talk to people with differing viewpoints while in college can be an effective long-term way to encourage greater involvement in the political process,” said Katy Harriger, professor of politics and international affairs and co-author of the study.

“In a free society, conflict is not going away. We are not going to talk our way out of diversity into a uniformity of thought and opinion, and nor do we want to. Instead, we need to listen to one another.” Michael Pisapia, assistant professor of politics and international affairs

“That starts with having faith in the good intentions of others – this is crucial in an academic setting. Beyond the classroom, where power inequalities are more severe, there is room for disagreement even on this point about good intentions. That point is itself something worth debating in class on politics,” he said.

A historical view of the Israel-Palestine conflict

Some students come to the“Zionism, Palestine, and Israel in Historic Perspective” class because they are interested in learning more about this conflict. Some have pre-conceived ideas. Some have ties to the Middle East or ties to one side or the other, said Rubin Presidential Chair of Jewish History Barry Trachtenberg.

“Most people have an opinion about the Arab-Israeli conflict and I want to feel confident in participating in discussions around the lunch table. This class is giving me the foundation I need,” said Chermol, who is also enrolled in Pisapia’s political theory class. 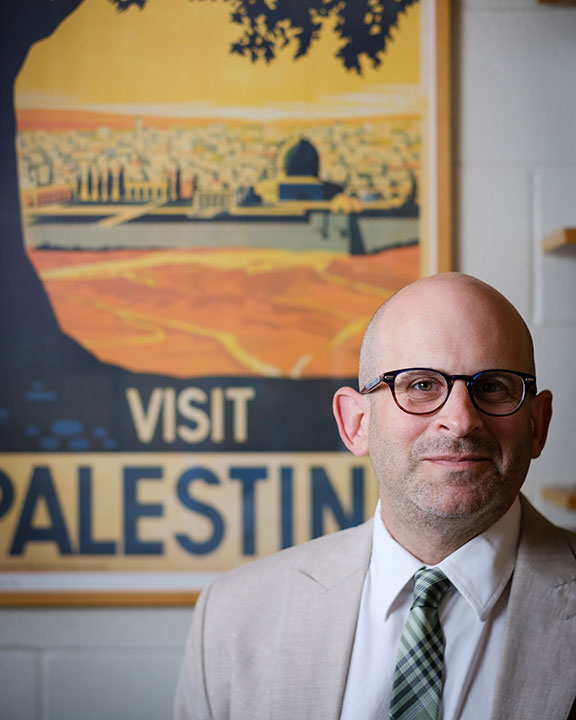 Both sides have had horrible catastrophes — for Jews, the Holocaust, and, for Palestinians, the exodus known as Nakba. Trachtenberg said students are reluctant to be critical of Israeli actions because of the Holocaust.

“I try to communicate that it is entirely ethical to simultaneously be deeply sympathetic towards the experience of European Jews in the decades prior to the creation of the State of Israel when they faced genocidal violence, widespread antisemitism, and nearly wholesale indifference to their situation by the rest of the world and be sympathetic towards the historical experience of Palestinian Arabs who faced nearly wholesale ethnic cleansing with the founding of Israel and systematic oppression since. Indeed, a commitment to universal human rights demands such a stance.”

Trachtenberg started the semester having students read from a contemporary collection of family histories and memories from the region. The stories describe the conflict from both Jewish and Palestinian points of view.

“Discussions of these stories were heated,” said Lucy Toma, a senior Arabic and Middle Eastern studies major. “My father is Iraqi and my mother is British so my perspective was the opposite of most other students in class. I knew Palestinians whose families were forced out of their homes. One of the stories we read was from a Jewish family who didn’t realize Palestinian Arabs were expelled from their homes. They thought they were just moving away because they chose to move.” 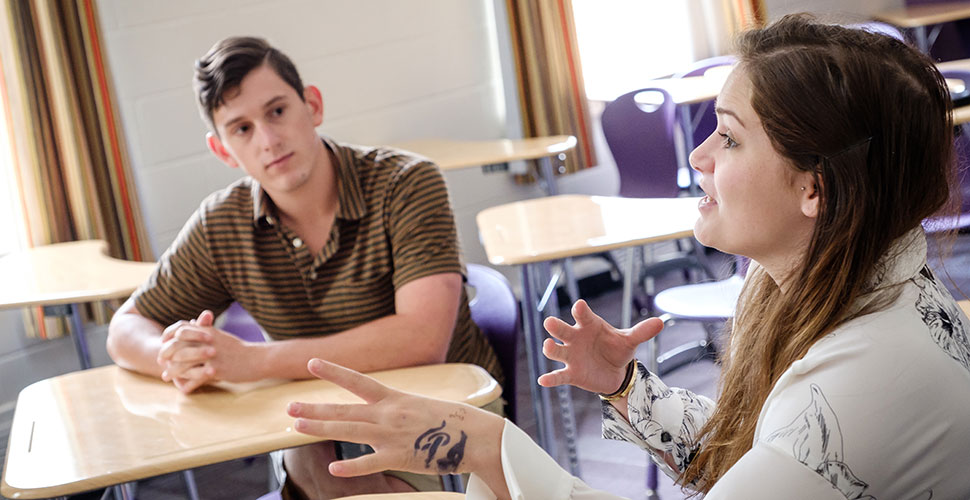 “National movements, when successful, draw boundaries around new nation states to bring them into a position of power. I want students to understand that this often involves leaving out entire groups of people who lived there before the boundaries were redrawn,” said Trachtenberg. “This happened to Jews in their experience in Europe and to Palestinians in their experience in Israel.”

“I started the class expecting that sympathies in the class would tend toward Israel, and my life experience has been very different,” Toma said.

“My view of the situation will not fully change, but the class is changing my perspective on why the conflict started. There’s more than one side to the story.” Lucy Toma ('18)

After reading the stories, the class moves back in history. “This helps students understand the contemporary relevance of the past,” said Trachtenberg. “To be able to think outside of imagined experience is important.”