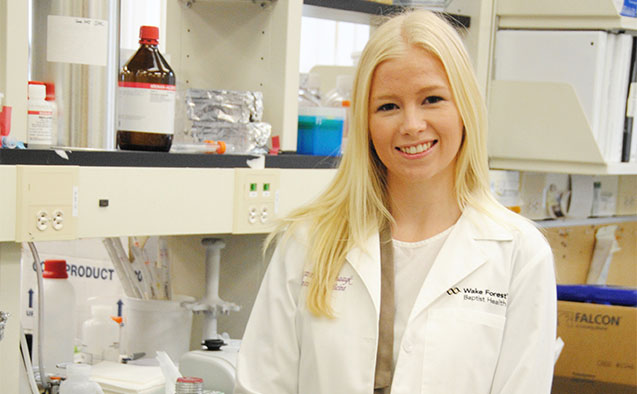 When she came to Wake Forest University as an undergraduate in the Fall of 2013, Margaret vanSchaayk (BA ’17, MA ’18) was pretty sure of at least two things: Printers were only for ink and paper and science was not for her.

On April 17 and 18, vanSchaayk will gladly admit she was wrong on both counts when she presents her research in 3D bioprinting of muscle tissue to members of Congress. Soon to graduate with a Master’s degree in Bioethics, she will be one of 60 students nationwide to address the lawmakers as part of Posters on the Hill, a program sponsored by the Council on Undergraduate Research.

And if the work she and her colleagues are pursuing at the Wake Forest Institute for Regenerative Medicine (WFIRM) ultimately comes to total fruition, military personnel and others experiencing traumatic injury may be able to recover more fully from their injuries and avoid amputation of impacted limbs.

Originally from Hinsdale, Ill., vanSchaayk arrived on campus with a goal she quickly learned she couldn’t achieve.

“I was so sure I would never take another science class again. Of course, at Wake Forest, it’s required, and that turned out to be a very good thing for me.” Margaret vanSchaayk (BA ’17, MA ’18)

Eager to fulfill an academic mandate, she signed up for a class in comparative physiology. To her surprise, she was hooked. She continued with her pursuit of her major in communication, but she added minors in biology and chemistry. The diversity of academic interests is a hallmark of Wake Forest students. In vanSchaayk’s class, 78 percent of graduates declared a second major or one or more minors.

In her junior year, vanSchaayk started working at WFIRM, the first facility in the world to engineer laboratory-grown organs that were successfully implanted into humans. The interdisciplinary team of researchers at WFIRM is working to engineer more than 30 different replacement tissues and organs today.

Among their tools is the 3D bioprinter, which churns out cells instead of ink. The concept is still amazing to vanSchaayk.

“Researchers at WFIRM have designed 3D printers that overcome many of the limitations of other bioprinting systems” she said. “This has enabled successful fabrication of many different complex tissues. Three years later, that never gets less impressive.”

The work she had already completed as an undergraduate made her a candidate for the honor she will soon receive. Her resume only improved when she earned a 10-week research opportunity at WFIRM. Working under the guidance of faculty mentors Sang Jin Lee, Ph.D., and Ji Hyun Kim, Ph.D., she printed small muscle constructs and guided their further development in a microenvironment she carefully created.

“Eventually, the idea is that a bioprinted muscle construct could work functionally and structurally for someone who has suffered a large scale muscle defect in trauma,” vanSchaayk said. “This is often seen in combat injuries. There aren’t great options now for regaining use and appearance of the muscle they’re missing. If there was a way to implant bioengineered muscle that could integrate with their body, they could gain structure and function without amputation.”

Impressed by the work, vanSchaayk’s faculty mentors encouraged her to enter the Posters on the Hill competition, which gives winners the chance to present to members of the Senate and House of Representatives and to learn about advocacy for undergraduate research. Hers was one of 60 chosen from 400 applicants. Selection for that honor is twice as hard as earning undergraduate admission to Wake Forest, one of the nation’s most selective colleges and universities.

“It is always exciting and gratifying when a student achieves such an honor,” Lee said. “We are very excited for Margaret to represent WFIRM at this prestigious event.”

The participants will not know the specific members of Congress to whom they are presenting until the final days in advance of the event.

As for vanSchaayk, she intends to apply to medical school for Fall 2019. And she will maintain her interest in regenerative medicine, hoping her project’s ultimate goal will be realized.

“It would be amazing to see,” she said. “Seeing the research being done and the results produced at WFIRM inspires me, knowing that clinical translations such as this are a realistic possibility. At WFIRM, there is a real push toward thinking translationally and always keeping in mind what the technology could do for real people.”