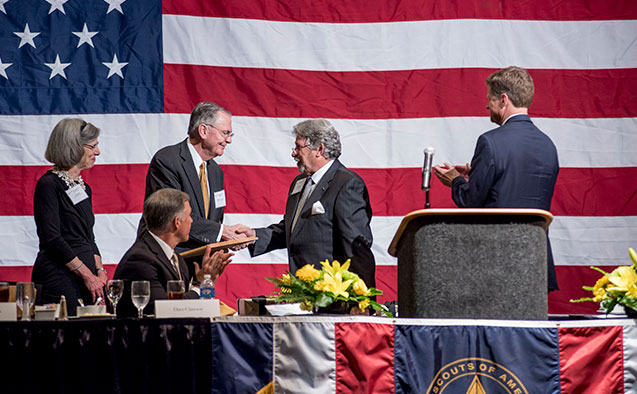 WFU President Hatch honored by Boy Scouts of America
The Boy Scouts of America honored President Nathan O. Hatch at the Distinguished Citizen Award dinner on May 10. The dinner was held at the Benton Convention Center in downtown Winston-Salem. Wake Forest football coach Dave Clawson delivered the keynote address at the event.

“It is truly an honor to receive the Distinguished Citizen Award,” Hatch said. “I wish to thank the Old Hickory Council, not just for this award, but for the work the executive board members and countless volunteers do to help shape the lives of the youth in our community. For years, I have admired and appreciated the work they have done to strengthen our community. I am humbled, honored and grateful to join those who have received this great honor.”

WFU students’ reporting featured on popular podcast
The most recent episodes of the popular podcast, “Undisclosed,” have focused on a legal case that involves the investigative work of Wake Forest University undergraduate and graduate students. On April 23, the podcast team began airing episodes about Chinquapin, N.C., resident Pam Lanier, who was convicted of murdering her husband in 2001 largely due to an odd rule of evidence known as the Doctrine of Chances.

The last of four episodes about the case the students have been working on will air Monday, May 14 at 6 p.m. EST.

The Undisclosed podcast investigates wrongful convictions, and the U.S. criminal justice system, by taking a closer look at the perpetration of a crime, its investigation, the trial, and ultimate verdict, as well as finding new evidence that never made it to court.

Wake Forest graduate student awarded NBCC fellowship
The National Board for Certified Counselors (NBCC) selected Felix Morton IV, a graduate student in Wake Forest’s clinical mental health counseling program, for the NBCC Minority Fellowship Program-Youth (MFP-Y). As an NBCC MFP-Y Fellow, Morton will receive funding and training to support his education and facilitate his service to underserved minority populations, with a specific focus on transition age youth (ages 16-25). By combining the skills and knowledge from his M.Ed. in higher education, Morton hopes to become a counselor in a college counseling center as well as an active support system and asset to his community.