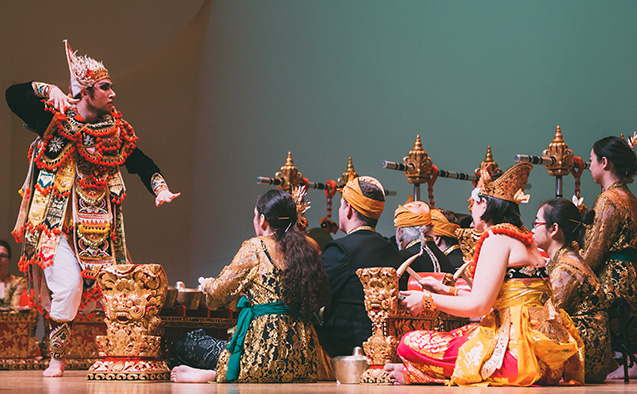 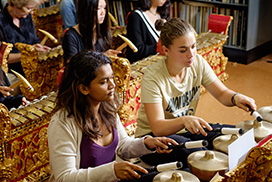 The Wake Forest gamelan ensemble will be performing at the ACCelerate: ACC Smithsonian Creativity and Innovation Festival at the National Museum of American History in Washington on April 5-7.

Read more about music professor Elizabeth Clendinning in this Q&A.

Wake Forest owns two types of gamelan, together consisting of approximately 45 instruments including gongs, keyed percussion instruments, drums and flutes. About 20-25 people can play at once.

The event will feature a new composition by Lasmawan, two classic dance pieces – a bird of paradise dance and a princely lion dance – and a new commission for the ensemble by Balinese composer I Wayan Sudirana.

“Wake Forest’s gamelan is an orchestra of instruments in one,” said music professor Elizabeth Clendinning, an expert in world music with a focus on gamelan communities in Bali.

“An important part of playing the gamelan is the spirit of the ensemble – a community of people offering their music as a form of celebration.” Elizabeth Clendinning

Gamelan player Madeline Muschalik is enrolled in Clendinning’s first-year seminar, where students learn the basics of Balinese performing arts. Muschalik played the flute for a few years in middle school. “I enjoy being with people who have a love of learning and want to play gamelan to experience a different culture. In the group I play the suling, which is the Balinese version of a flute, and having past experience has been helpful.”

Lasmawan, a native of Bali, received his degree in Indonesian traditional music from conservatories in Bali and Java and taught for several years in Java before coming to the United States in 1990. He is artistic director of the Colorado College Balinese Gamelan orchestra. Ni Ketut Marni performs Balinese Dance throughout Colorado and other cities in U.S.

Wake Forest’s rare, custom-designed, hand-carved, hand-painted gamelan was commissioned by the University and made in Bali. Lasmawan and Ni Ketut Marni blessed and named Gamelan Giri Murti in 2015.

Watch musicians playing the gamelan in this video.