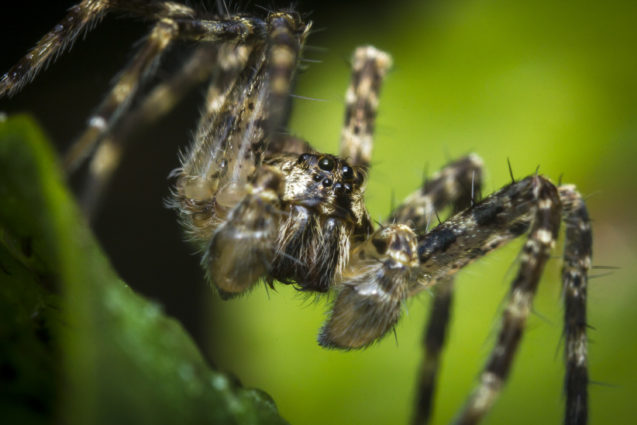 It might be one of nature’s most agile and calculating hunters, but the wolf spider won’t harm an insect that literally leaves a bad taste in its mouth, according to new research by a team of Wake Forest University sensory neuroscientists, including C.J. “Jake” Saunders.

Saunders presents the team’s findings this week at the Association for Chemoreception Sciences (AChemS) annual meeting in Bonita Springs, Fla.

Scientists have known for some time that certain insects produce chemicals that irritate the mouth or skin of the mammals or birds that try to eat them – but they didn’t know if those insects caused the same reaction in spiders. 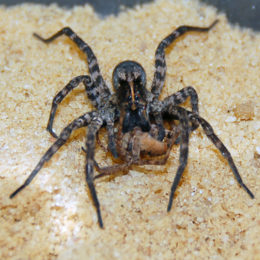 So Saunders and his colleagues painted the legs of wolf spiders with one of three common chemical irritants and watched how the spiders reacted. Exposure to capsaicin (found in chili peppers) made no difference and menthol (found in mint leaves) only caused a small difference. But when exposed to allyl isothiocyanate (AITC), the active ingredient in mustard and wasabi, the wolf spider couldn’t remove it fast enough.

“They turned themselves into tripods and wiped the coated leg with their free legs,” Saunders said. “It’s like when you touch a chili pepper and then rub your eye, times eight. That grooming reaction is what we would call a robust behavior!”

Similarly, when a wolf spider bit into a cricket that had been dunked in AITC, the spider dropped it.

“That’s a behavior spiders usually don’t do,” Saunders explained. “But the spider got rid of the cricket and started grooming its mouthparts.”

An insect’s chemical defenses against predators work by modulating the transient receptor potential (TRP) channels in the predator. TRP channels activate sensations such as pain and taste. When the researchers sequenced the wolf spider’s brain cells, they found the same molecules that are activated in humans in response to an irritating chemical exposure.

That means spiders react to irritating chemicals in a similar way to mammals, including humans, who also have TRP channels. A better understanding of this process could allow scientists to use spiders to test chemicals for potential harm to humans. Or it could help us make a spider repellent from a chemical found in nature, Saunders said. (That’s the scientific underpinning for squirrel-proof birdseed, which is coated with capsaicin. Squirrels avoid capsaicin, but the burn doesn’t affect birds.)

Besides C.J. Saunders’ abstract on wolf spiders, three other abstracts submitted by Wake Forest researchers were selected for presentation at the AChemS annual meeting: