‘From the Ground Up’ put WFU facilities staff center stage

Update 10/13/20: A documentary of “From the Ground Up” that captures the heart and spirit of the performances on Hearn Plaza is available for viewing here.

Housekeeping staff, arborists, turf crew members, locksmiths and carpenters were among the nearly 70 participants performing on Hearn Plaza in the original dance piece “From the Ground Up.” Performances were held on Oct. 3, 4 and 5.

“From the Ground Up” program 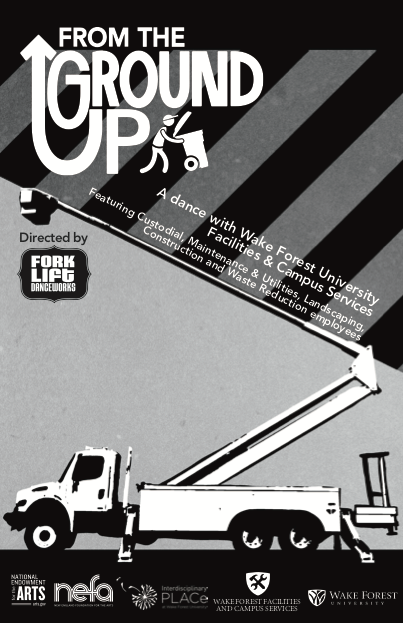 More than two-and-a-half years in the making, “From the Ground Up” was a collaboration between Wake Forest and Forklift Danceworks, a dance company based in Austin, Texas, whose mission is to use creative dance to build community. Cindy Gendrich, theatre professor and director of the University’s Interdisciplinary Performance and Liberal Arts Center (IPLACe); Christina Soriano, dance professor and associate provost for the arts and interdisciplinary programs at Wake Forest; and John Shenette, vice president, facilities and campus services, were the forces that helped move the project forward.

“The purpose of the show was to educate the campus and the wider community about the critical work the facilities staff do to keep campus running.” Allison Orr (‘93), Forklift founder and artistic director

The project began in 2017 with Orr and her colleagues, Director Krissie Marty and Associate Choreographer Gretchen LaMotte visiting campus where most of the focus centered on building relationships with facilities team members and learning more about the work they do through job shadowing. The choreography was built around the movements involved in daily work using the tools of each team’s trade.

“We knew the audience would have a new respect for the work our facilities team does and the impact of that work on campus. What surprised us was that the facilities team staff also gained a better understanding of their colleagues’ work,” said Shenette.

“We experienced a different kind of collaboration, engaged in conversations across teams and learned more about each other as individuals.” John Shenette, vice president, facilities and campus services

Original musical compositions were created by Graham Reynolds and performed by Wake Forest faculty and students.

FROM THE GROUND UP by Wake Forest University on Exposure

The presentation of “From the Ground Up” was made possible by the New England Foundation for the Arts National Dance Project, with lead funding from the Doris Duke Charitable Foundation and the Andrew W. Mellon Foundation. The project was also supported by a grant from the National Endowment for the Arts.