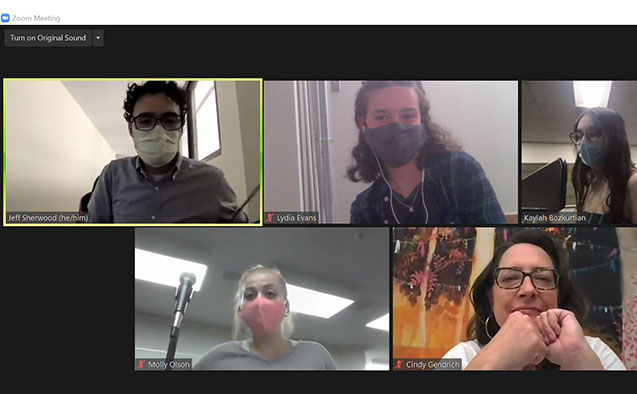 Wake Forest Theatre’s first play this season, “Into the Woods” by Stephen Sondheim and James Lapin, was canceled – as so many indoor events have been during the pandemic.

Director and theatre professor Cindy Gendrich wanted to make it happen. She thought about performing the play in front of Wait Chapel, but the length of the play, the logistics of producing it outside and the required social distancing made an outdoor performance complicated. 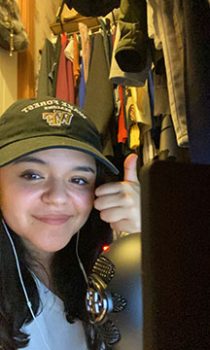 For best sound, Sarah Cadena recorded her audio podcast from inside her closet.

“The play is about connectedness and being all in it together. Part of what makes it work is sitting shoulder to shoulder in the theatre space with others around us,” Gendrich says.

Though we may not be going into the woods together this fall, Gendrich kept relationships – a major theme of the play – front and center by offering audio productions that can be enjoyed anywhere there is internet.

“Connected in the Deep,” is a collection of six plays about love and friendship, presented as radio plays. The plays will be released in two segments this fall.

To celebrate the release of this first collection of performances, Wake Forest Theatre is hosting an online listening party on Friday, October 9 at 7:30 p.m. Click here to register for the premiere.

The three-play podcast lasts approximately one hour. Listen at theatre.wfu.edu. 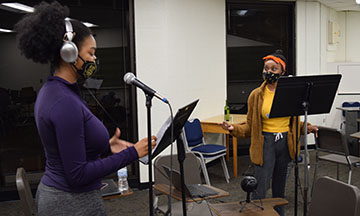 “I was devastated to hear that “Into the Woods” would not be happening,’ said junior Molly Olson who was cast as Little Red; however,  these radio plays have provided a unique opportunity to focus on creating the world and the characters of the play just through the use of our voices. It’s definitely brought me out of my comfort zone as an actor.”

The title, “Connected in the Deep,” came from a William James quote: “We are like islands in the sea, separate on the surface, but connected in the deep.”

Rather than asking an already exhausted audience of zoom-ers  to watch a two-hour play, Gendrich embraced the power of audio storytelling.

“I remembered something from my childhood. We were driving home in my family’s station wagon from my grandmother’s house, on a really foggy night, and my dad had the radio on CBS Radio Mystery Theatre. I was squashed between my two brothers in the back seat, listening to this spooky story, and it was so fun and cozy and creepy, all at the same time. I wanted to create that same experience for our listeners – one that is personal and private, yet also connects us,” says Gendrich.

The first podcast of audio plays will be available through Oct. 18.