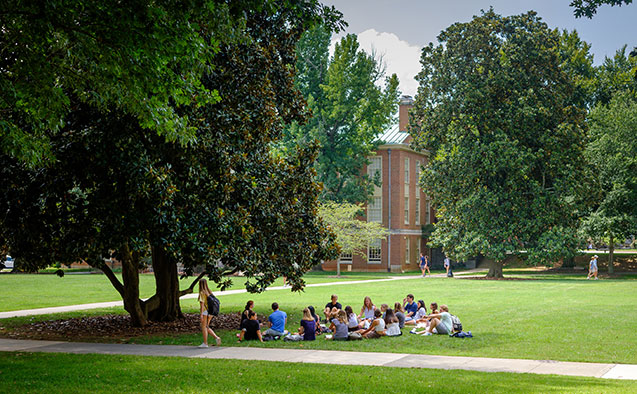 Wake Forest Launches its new African American Studies Program
By Jessica Ruf | Diverse: Issues In Higher Education
Wake Forest launched its new African American Studies program last week, with Corey D.B. Walker serving as its inaugural director. “The discipline has been in the Academy for over half a century, and its importance is underscored by the ways in which we’re still wrestling with fundamental issues about how we live together and what it means to be human,” Walker said. – 9/02/2021

For today’s college students, 9/11 has always been part of history
University Business Magazine
In elementary school, “I didn’t think about it that much,” said Wake Forest sophomore Nathaniel Avery, who thought about it only in a historical sense. It wasn’t until high school that he realized 9/11 wasn’t so long ago, and while he was not alive to see it, he was alive to witness how that day has altered the nation. –9/10/2021

Former DA Greg Newman’s attorney David Freedman dies of COVID-19 complications
By Karen Chavez | Asheville Citizen Times
He was a past president of the Forsyth County Bar Association, lectured frequently before law groups on legal ethics, and had taught criminal procedure and trial practice as an adjunct professor at Wake Forest University School of Law. – 9/08/2021

Hinduphobia is a smokescreen for Hindu nationalists
The Washington Post
Tanisha Ramachandran is an associate teaching professor of religion and director of religion and public engagement at Wake Forest. She joins scholars of Hindu studies and founders of the Feminist Critical Hindu Studies Collective in speaking out in support of the “Dismantling Global Hindutva” conference’s aims. – 9/10/2021

The life-changing science of detecting bullshit
By Michael Shermer | Skeptic Magazine
In this conversation with Michael Shermer, social psychologist and psychology professor John Petrocelli talks about the causes and consequences of BS and BSing. Petrocelli is the author of The Life-Changing Science of Detecting Bullshit. – 9/07/2021

The unemployed face new challenge as extra $300 in federal payments end
By Sharon Myers | The Dispatch (Lexington, NC)
Economics professor Robert Whaples said the ending of the pandemic unemployment payments should not make that much of an impact on the economy because there are a lot of jobs available at the moment. “The unemployment rate is pretty low right now…and there are a lot of people hiring. There will be some individuals who might find themselves in a bind, but most people are in a good position to find a job.” – 9/09/2021

Law school clinic wins reversal of 1993 conviction
By Debra Cassens Weiss | ABA Journal
Charles Plymail was represented by a law professor with the help of his students at the Wake Forest University School of Law’s Appellate Advocacy Clinic. “We were pleased by the court’s opinion, including that it was published and unanimous,” John Korzen, a legal writing professor at Wake Forest’s law school who led the habeas appeal, said. – 9/10/2021

Mentorships impact students of all ages
By Greg Keener | The Clemmons Courier
Allison McWilliams. assistant vice president of mentoring and alumni personal and career development at Wake Forest said, “We all need, and can benefit from, great mentorship, because no one is a finished product.” – 9/09/2021

How is the Piedmont Triad honoring 9/11 on the 20th anniversary?
By Justyn Melrose | WGHP-TV
Wake Forest’s “Climb to Remember” is included in this list of events planned to honor the thousands of lives lost on September 11. ROTC cadets and others walked 2,997 steps to honor the 2,997 people whose lives were lost 20 years ago in the attack. – 9/08/2021

Navigating the world of art at IdeasCityWS
By Kim McGrath | news.wfu.edu
How are 18th century British explorer Captain Cook and 21st century blockchain connected? A Fijian oil bowl discovered by Cook is housed at the Lam Museum of Anthropology. The technology was used earlier this year in a computer science student-led hackathon to figure out how this Fijian oil bowl may have found its way to Wake Forest University. Visitors to the IdeasCityWS festival on Oct. 2 can learn more about the bowl and blockchain technology in the Lam Museum’s “outdoor living room” tent at the Marketplace of Ideas. – 9/09/2021