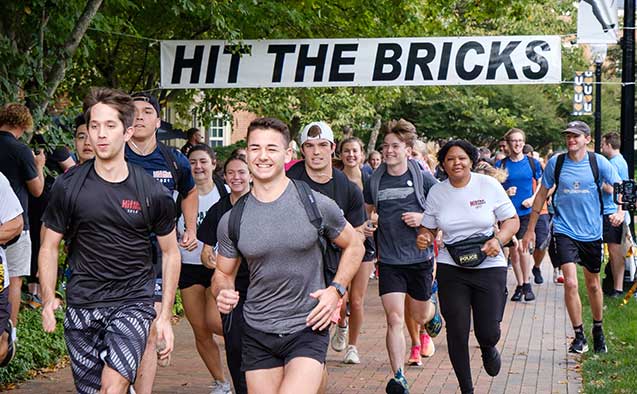 Hundreds of Wake Forest students, faculty and staff were doing laps around Hearn Plaza in the name of cancer research. They spent eight hours running for the school’s annual Hit the Bricks fundraiser and raised more than $200,000, with donations still coming in. – 10/01/2021

Should colleges be doing more to prioritize career development?
By Paul Fain | Open Campus
In this Q&A, Andy Chan, vice president of innovation and career development, talks about whether there have been changes in higher education career services. Fain interviewed Chan as part of a new report for Inside Higher Ed on career connections and four-year colleges and universities. – 9/30/2021

A benefit of strength training that might surprise you
By Anne Taylor | Health Digest
If you put someone on a walking program, it will take time before they perceive their body is changing,” said health and exercise professor Jeffrey A. Katula. “But with strength training, you can feel a difference in your muscles even after one session.” – 10/01/2021

Facebook has a problem, but teens may have to face it on their own
By Peter Suciu | Forbes
“Social media sites need a mental health warning label that is readily visible to users,” said Allison Forti, associate teaching professor and associate director of the Department of Counseling Online Programs at Wake Forest. “They also need to provide free, downloadable guidebooks for users on how to use their platform safely.” – 10/03/2021

How new leaders build or lose trust over time
By Sara Savat | Phys.org
Some leaders — particularly minorities — may start with low levels of trust, but new research shows they can quickly build followers. A study co-authored by Patrick Sweeney, executive director of the Allegacy Center for Leadership and Character at Wake Forest, is featured in this story on transformational leadership and trust development. – 9/28/2021

Putting career readiness at higher ed’s core
By Doug Lederman | Inside Higher Ed
In this podcast, Wake Forest’s Andy Chan and Christine Cruzvergara of Handshake endorse the view that colleges and universities should be collecting and sharing data about how well they are preparing students for success in the workplace. – 9/30/2021

Is there an economic argument for COVID-19 boosters?
By Jaimy Lee | MarketWatch
“If the scientists are concerned that this is being rushed, and the science is not behind it, I could see that policymakers could be scrambling for anything that would guarantee a normal path forward,” said economics professor Tina Marsh Dalton. “Economists talk a lot about the idea of opportunity costs. Once we throw money at boosters, it’s not going toward the unvaccinated.” – 9/28/2021

The challenge and promise of quantum computing
By Vivian Wagner | Tech News World
“Our world is already full of problems that are hard for even the fastest computers — from biological problems like gene expression and protein folding to simulations of quantum behavior in the nuclear arsenal,” said physics professor David L. Carroll. – 9/30/2021

Use online resources to develop soft skills
By Jennifer Bringle | Journal of Accountancy
“Accounting is such a people business,” said Rebecca Johnson Chase, senior associate director, market readiness and employment. “People think about the technical and analytical skills, which are so important, but what really sets accounting professionals apart are their soft skills, interpersonal skills, and people skills.” – 9/30/2021

Freedom is on the move
By Caleb Giddings | America’s 1st Freedom
“Even prior to 2020, compared to long-standing gun owners, new gun owners tended to be more racially diverse (though still not very racially diverse), more urban and suburban, more politically liberal and more female than other gun owners,” said sociology professor David Yamane, who is completing a book about American gun culture and runs the “Gun Culture 2.0” and “Gun Curious” blogs. – 9/27/2021

Marketplace of Ideas festival held in Winston-Salem
WGHP-TV (High Point, NC)
Musical performances, interactive exhibits and panel discussions were featured in downtown Winston-Salem as Wake Forest University, New Museum and dozens of local community partners celebrated the culmination of a year of creative collaborations. The festival, held in Innovation Quarter, was free and open to the public. – 10/02/2021

Yusef Salaam, one of five people wrongfully convicted in Central Park jogger attack, speaks at WFU
By Michael Hewlett | Winston-Salem Journal
On Monday afternoon in front of more than 100 law students and faculty at Wake Forest School of Law, Yusef Salaam used an unexpected phrase — a love story. Salaam was one of five Black and Latino teenagers who were wrongfully convicted of raping a woman who was jogging in Central Park in 1989. Salaam was interviewed by Vice Provost and law professor Kami Chavis. – 9/27/2021

Race for 2022 NC United States Senate seat heats up
By Justin Shrair | WXII-TV (Winston Salem, NC)
“We might say ‘oh, November 2022 seems so far off’ but of course the campaigns and the ads that you see now aren’t necessarily geared towards winning the general election in November. They are geared toward winning the primary election that is trying to become the key Republican that goes forward or the key Democrat,” said politics professor John Dinan. – 9/28/2021