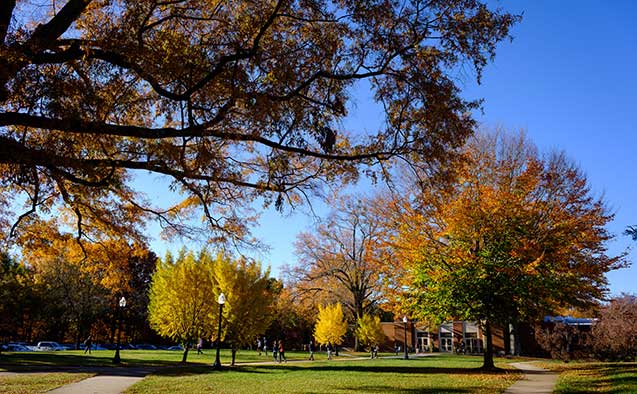 Wake Forest reimagines the tailgate
By Maria Carrasco | Inside Higher Ed
The University has added music, seating, food trucks and tent rentals to pre-football game tailgates, hoping to draw students who have never felt welcome at the fraternity-dominated events. “I hope more schools can create inclusive and equitable experiences for their students, whether they be tailgates or anything else,” said José Villalba, vice president for diversity and inclusion. “And I know that we need to do it in other spaces as well.” – 11/18/2021

How to stay safe this Thanksgiving
By Lucy D’Agostino McGowan | USA Today
In years past, holiday planning revolved around deciding who was going to host, who was going to attend, and who was bringing the turkey. This year that list should also include making a plan for safe holiday gatherings amid the ongoing pandemic, especially as we see the number of cases rise again, writes statistics professor Lucy D’Agostino McGowan in this op-ed. – 11/21/2021

Sapar Contemporary opens the gallery’s second solo exhibition of work by Faig Ahmed
ArtDaily Newspaper
Wake Forest is home to a Faig Ahmed carpet – the work was selected by students participating in the New York art-buying trip in 2017. The University is mentioned as a private collector of Ahmed’s work in this article about an upcoming solo exhibition featuring three new large-scale new carpets. – 11/17/2021

As Julius Jones’ execution looms, activists are pressing the governor to intervene
By Jaclyn Diaz | NPR
Research by economics professor Francis Flanagan has shown the racial makeup of a jury can have an impact on the case’s outcome. Data shows juries composed of more Black jurors are much more likely to acquit criminal defendants across the board. White men on a jury are actually more likely to convict Black defendants and less likely to convict white defendants, he said. – 11/18/2021

N.J. police forces are far whiter than the rest of the state
By Payton Guion, Rodrigo Torrejon | NJ.com
“It can begin to look like an occupying force rather than people who are there to serve the community,” said law professor Kami Chavis. – 11/15/2021

Are climate declarations and emission reduction pledges legally binding?
By Justin Catanoso | South Africa Today
The 2015 Paris Agreement is not a treaty between nations, but rather a voluntary accord between 194 nations signed by their legal representatives. As such, it is not deemed legally binding — preventing nations and corporations from being sued to force them to take legal responsibility for harmful carbon emissions and policies. – 11/15/2021

SC21’s Student Cluster Competition winners announced
By Oliver Peckham | HPCwire
A team of WFU computer science students was chosen to compete in the Student Cluster Competition of the SC21. “Our team was selected for the third time in a row this year. In previous years, the competition involved going to the leading high-performance supercomputing conference, but this year, the competition was virtual. Our six students competed from the basement of Manchester Hall,” said professor Samuel Cho. –11/19/2021

College students are giving back this holiday season feeding the hungry
By Zyneria Byrd | Spectrum News Charlotte
Wake Forest University Campus Kitchen is hosting its annual Turkeypalooza event. It’s a weeklong donation of Thanksgiving meals to local organizations and nonprofits across Winston-Salem. The student leaders and student volunteers are making 500 Thanksgiving meals that will be delivered in the community. – 11/19/2021

Senior invents bra to help women post-mastectomy; working to get invention on the market
By Natalie Wilson | WGHP-TV (High Point, NC)
Leah Wyrick pitched her idea for a breast cancer recovery bra her freshman year during the Center for Entrepreneurship’s “Pitch over Pizza” event. She was the first freshman to be invited into the University’s Startup Lab and was awarded $4,500 in initial funding for her business idea. She has since raised $45K to launch Three Strands Recovery Wear Corporation. – 11/16/2021

Holiday spending expected to run head-long into supply-chain, worker-shortage issues
By Richard Craver | Winston-Salem Journal
“While online shopping is very much alive and well, consumers are looking to experience — for the first time in two years — the sights and sounds and tastes and smells of the holidays in person, masks or no masks,” said Roger Beahm, executive director of the Center for Retail Innovation at Wake Forest. – 11/20/2021