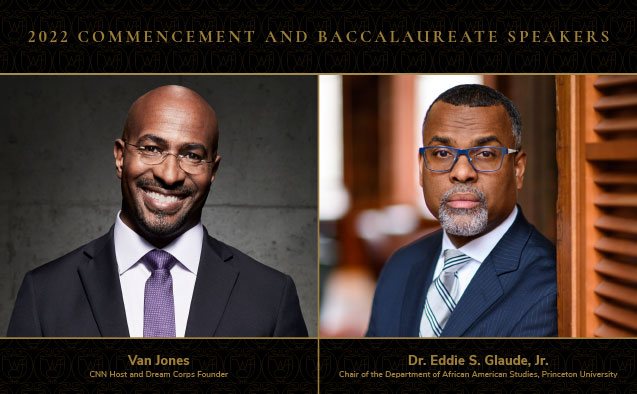 Jones is an Emmy Award-winning producer and author of three New York Times best-selling books: Beyond the Messy Truth: How We Came Apart, How We Come Together (2017);  Rebuild the Dream (2012); and The Green Collar Economy (2008).

“A dedicated professional, gifted speaker and proven leader, Van Jones has much to say to our graduating students about how to shepherd change in the world,” said Wake Forest University President Susan R. Wente. “I’m grateful to Mr. Jones for agreeing to deliver what I’m sure will be an inspiring and memorable address.”

Jones has successfully stewarded bipartisan legislative and advocacy efforts during each of the last four presidential administrations. He advocated successfully for the passage of the FIRST STEP Act, which the New York Times calls the most substantial breakthrough in criminal justice in a generation.

Jones was the main advocate for the Green Jobs Act. Signed into law by George W. Bush in 2007, the Green Jobs Act was the first piece of federal legislation to codify the term “green jobs.” During the Obama Administration, the legislation has resulted in $500 million in national funding for green jobs training. In 2009, as the Green Jobs Advisor to the Obama White House, he oversaw an $80 billion dollar investment in clean energy jobs.

As a social entrepreneur, he founded and led the REFORM Alliance, Color of Change, the Ella Baker Center for Human Rights and the Dream Corps, which works to close prison doors and open doors of opportunity in the green and tech economies.

Wake Forest’s commencement ceremony is a ticketed event reserved for graduates, their families and guests and is not open to the public. The ceremony takes place on Hearn Plaza at 9 a.m.

A livestream webcast of the ceremony will be vailable on the University’s commencement website and a recording will be posted after the event.

Glaude is a passionate educator, author, political commentator and public intellectual who examines the complex dynamics of the American experience. His most recent book and a New York Times bestseller, Begin Again: James Baldwin’s America and Its Urgent Lessons for our Own, takes a comprehensive look at the difficulties we face as a democracy due to the challenges of race in America.

Glaude frequently appears in varying media outlets, as a columnist for TIME Magazine and as an MSNBC contributor on programs like Morning Joe and Deadline Whitehouse with Nicolle Wallace. He also regularly appears on Meet the Press on Sundays.

Baccalaureate will take place Sunday, May 15 at 9 a.m. in Wait Chapel. Like commencement, baccalaureate is a ticketed event reserved for graduates, their families and guests and is not open to the general public.

A livestream webcast of the ceremony will be available on the University’s commencement website and a recording will be posted after the event.

Additional information about Wake Forest’s commencement weekend, including the list of 2022  honorary degree recipients, is available at commencement.wfu.edu.