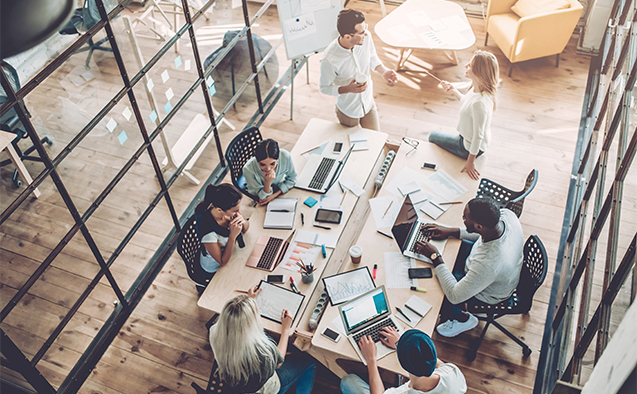 College grads are snaring high-paying jobs. How the labor shortage made way for better benefits
By Paul Davidson | USA Today
At Wake Forest, full-time job postings over the past school year doubled from the prior year to 91,400, according to Andy Chan, vice president of career development. More than half of seniors accepted offers before graduating. “This is the hottest job market most of us have seen,” Chan said. Despite the rising pay, the pay levels for college grads generally are still a bargain for employers compared with the salaries of experienced workers, he added. – 6/21/2022

Hidden images in this optical illusion reveal how you see the world
By Serena O’Sullivan | The Kim Komando Show
According to philosophy professor Adrian Bardon, we tend to dismiss facts that challenge our perception. Thus, looking at a stereogram can reveal how you perceive the world. However, you can also use a stereogram to challenge your preconceived notions. – 6/25/2022

Structural changes help embed career prep into academic work (opinion)
By Kerry Fulcher | Inside Higher Ed
Another component of our career services reinvention involves our investment as a designing partner with Kaplan’s Career Core services. Pioneered at Wake Forest, this developing model has two components: Read more from the survey on student views of faculty, and provide a series of asynchronous online learning journeys that offer students exposure to a wide range of career possibilities. – 6/21/2022

Jon Batiste raises awareness of HIV/AIDS at ‘Something in the Water’ festival
By Serena Sonoma | GLAAD
“It will take all of us to spread the love and ensure people living with HIV are able to access treatment and prevention services without fear of discrimination in their communities. People like Jon are vital to ending the HIV epidemic,” said Shonda Jones, principal investigator, the Gilead COMPASS Initiative Faith Coordinating Center Wake Forest School of Divinity. – 6/22/2022

Will China and Russia stay aligned?
By Elliott Abrams, Michelle Gavin | Foreign Affairs
It depends on what one means by “Chinese-Russian alignment,” said politics and international affairs professor Lina Benabdallah. “In the last few weeks, we have observed China mostly back Russia rhetorically and not in concrete actions. If by alignment we mean propaganda or party line in media outlets, then maybe, but if alignment includes more concrete forms of solidarity we have actually not seen much pro-Russia action coming from Beijing. – 6/21/2022

Pollen and heat: A looming challenge for global agriculture
By Carolyn Beans | Grist
Every seed, grain, and fruit that we eat is a direct product of pollination, explains biochemist Gloria Muday. “The critical parameter is the maximum temperature during reproduction,” she said. With funding from the NSF, Muday is now part of a multi-university team aiming to uncover the molecular mechanisms and underlying genes that could help tomato pollen weather a heat spell. – 6/25/2022

Behind The Pearl—the planned med school site and hallowed ground for Charlotte’s Black community
By Allison Braden | Charlotte Magazine
In March, 131 years later, Atrium Health referred to Good Samaritan Hospital when it announced plans for The Pearl, an “innovation district” that will be anchored by the four-year Wake Forest University School of Medicine—another Charlotte first—when it opens in 2024. The district will sit at the intersection of Baxter and McDowell streets in what’s now known as midtown and what was once Brooklyn, a Black community demolished during the urban renewal era of the 1960s and ’70s. – 6/20/2022

Tombstones moved from Piedmont cemetery
The Greenville News
“In some ways, burials are a lie,” said Tanya Marsh, a professor of cemetery law. “We make people promises that we can’t keep.” Today, caskets are mostly made of metal and are normally placed in a concrete box, she said. – 6/22/2022

Local congressional race may serve as signal
By Paul Johnson | High Point Enterprise
The 6th Congressional District race between freshman Democratic Rep. Kathy Manning and Republican challenger Christian Castelli may offer a signal on whether or how much of a red wave sweeps GOP candidates into Congress, said politics professor John Dinan. – 6/25/2022

Abortion access in NC remains unchanged, despite the Supreme Court ruling
By Michael Hewlett | Winston-Salem Journal
“Right now, it doesn’t change anything in North Carolina (in regards) to abortion access,” said Julia Jordan-Zachery, a professor and chair of the Women’s, Gender and Sexuality Studies Department at Wake Forest “There have been a series of attempts to overturn (Roe v. Wade) at the local, state and national levels,” she said. “This did not just happen. This is very much planned and has been in the political works from 1973 until now.” – 6/24/2022

Roe reversal signals a threat to the fight against climate change, experts say
By John Deem | Winston-Salem Journal
That foundational finding is now potentially at risk, said Scott Schang, a law professor and director of the Environmental Law and Policy Clinic at Wake Forest. “It’s clear several of the justices are angling to limit or overrule Chevron, which will likely mean less deference to expert agencies and more reliance on judges, who have been known to botch environmental law cases when interpreting laws,” he explained. – 6/25/2022