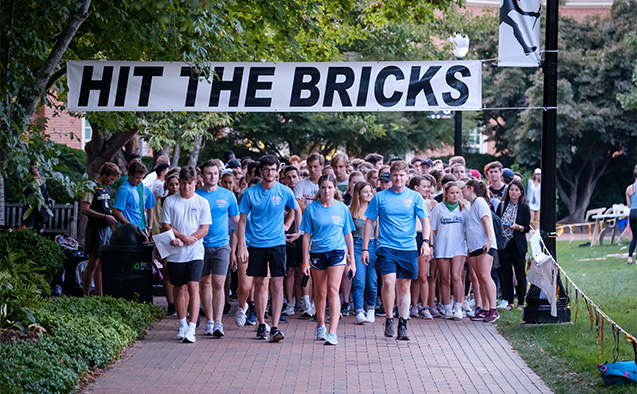 The eight-hour relay race starts at 11 a.m. with an opening ceremony featuring Wake Forest President Susan R. Wente and concludes at 7 p.m. with a final lap in remembrance of cancer victims and in celebration of cancer survivors. The closing ceremony will feature luminaries in front of Wait Chapel and Wake Forest senior Gabrielle Peko sharing how cancer has impacted her life.

Students, faculty, staff, alumni and friends race around the brick pathways on Hearn Plaza, competing to see which teams can run the most laps and raise the most money.

“Through this tradition, the campus community comes together to support cancer research and rally around a shared cause in the spirit of Pro Humanitate,” said Brad Shugoll, director of service and leadership in the Office of Civic & Community Engagement (OCCE). “For students in particular, this serves as an opportunity to learn about philanthropy and reflect on their role in the community.”

In 1980 The Brian Piccolo Cancer Research Fund was started by students in memory of the Wake Forest All-American football player, Brian Piccolo. Piccolo attended Wake Forest in the 1960s, went on to become a running back for the Chicago Bears, and died in 1970 of embryonal cell carcinoma at the age of 26.

This year’s student director, senior Erin Byrd is projecting over 1,500 participants and anticipates surpassing $1 million dollars in lifetime giving for the 19 year history of the event.

“We are seeing a full return of faculty and staff teams and the continued support of alumni engaging virtually,” said Byrd. “The event has grown each of my four years and I’m excited to see the campus come together around a cause I am incredibly passionate about.”

All of the funds raised support the Comprehensive Cancer Center at Atrium Health Wake Forest Baptist. Since 1980, Hit the Bricks along with other student-led events has raised over $5 million for the Piccolo Fund.

Media are invited to cover Hit the Bricks throughout the day, but turnout is expected to be heaviest between 4-6:30 p.m.

To interview Shugoll or Byrd or to learn about media parking, please contact media@nullwfu.edu or Cheryl V. Walker at walkercv@nullwfu.edu or 336-758-6073.

To learn more about the history of the Brian Piccolo Fund, read this Wake Forest Magazine story.