Wake Forest University anthropologist Ellen Miller is among the scientists deciphering the secrets of a trove of small mammal fossils discovered in a quarry in Egypt. The 20-million-year-old bones and teeth found in the Egyptian desert may shed light on the origins of present-day African wildlife. 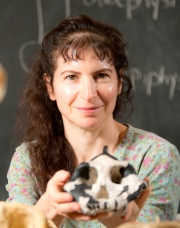 The story is the subject of a segment of the award-winning television series “Wild Chronicles,” currently airing on public television stations (Episode 412â€”Looking Back; check listings for local air dates). “Wild Chronicles” is produced by National Geographic Television and presented by WLIW21 in association with WNET.ORG.

After Gingerich found the fossil site in the area of Khasm El Raqaba, Miller was asked to study some of the fossils he found there. She is an expert on the evolution of African mammals and identified a few rodent jaws, bat jaws and some teeth.

Miller, who also studies fossil remains of African mammals at another site in Egypt, hopes the discovery of these bones of small mammals from the same period will provide missing pieces of an ancient animal immigrant story.

“For the first time you get a land bridge between Eurasia and Africa and at that time you get a whole array of different kinds of animals that comes flooding into Africa,” Miller says. “The deposits here preserve the remains of those animals, the first immigrants from Eurasia into Africa.”

The small mammals found have clear relatives in Eurasia, she says. They are also the likely ancestors of some of Africa’s most iconic animals such as the zebra, the rhinoceros, the gazelle and the giraffe.