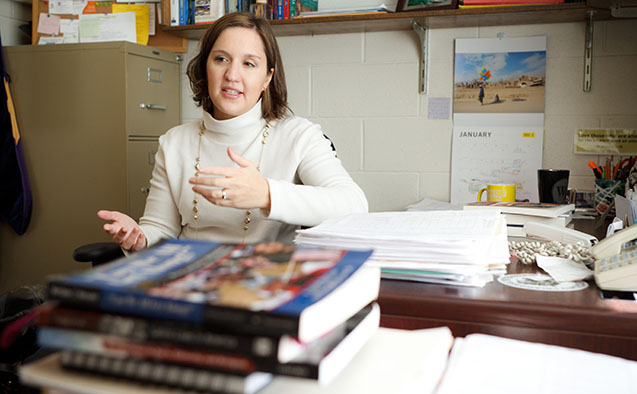 As Tuesday’s midterm election nears, candidates are making their final push to appeal to voters. Mailboxes are full of campaign literature and it’s hard not to miss those ads on social media and other platforms.

Political and civic groups across the country and in North Carolina are also creating these messages in Spanish and meeting Latinos where they are in the community to reach this fast-growing block of voters.

Betina Wilkinson, an associate professor of political science and international affairs at Wake Forest, studies the political behaviors of these voters. She says she’s concerned about the amount of misinformation and disinformation that is taking place in Spanish language media outlets and social platforms.

Wilkinson’s research interests are in racial and ethnic politics with a focus on sports activism, Black, Latinx experiences with the criminal justice system and the Latino vote.

What are some of the top issues in this election?

“In general, we know inflation, rising housing and gas prices are top concerns for individuals this time around, including the Latinx population. Abortion is also a top issue given the fact that the Supreme Court recently overturned the Roe v. Wade decision. Healthcare is also a concern for Latino voters, followed by violent crime and education.”

Why is there more attention on Latino voters in recent years?

“The Latinx population in North Carolina continues to grow. Census data shows that there are now more than one million Latino residents. If you look at the latest Pew Research Center article on Latino voters, they overwhelmingly lean Democrat and have leaned Democrat for many decades. A recent Washington Post poll shows that 63% of the Latinx population throughout the country favors Democrats and 36% favor Republicans. The largest support that Republicans received from Latinos would be in 2004 when George W. Bush ran. He obtained 40% of the Latino vote, yet no presidential candidate in recent history has been able to secure that much support.”

I think that economic issues will play a significant role in shaping Latinos’ vote choice and the inflation has hurt some Democratic candidates’ chances of getting reelected or getting Latinx support. However, most Democratic candidates generally adopt Latino friendly stances on issues regarding immigration, education, racial injustices and healthcare thus helping to secure their vote. Further, Democrats’ commitment to and investment in mobilizing Latino voters is generally greater than that of Republicans.”

What are you seeing with young NC Latino voters?

“Young Latino voters in NC and throughout the U.S. overwhelmingly vote Democratic. In North Carolina, the largest voting bloc of Latino voters in the state are those between 18 and 35 years of age. Many are second generation Latinos, born in the U.S. – thus citizens – and are eligible to vote once they are 18 years of age. Some have come at a young age, became citizens and are now eligible to vote. The NC Latino voting population is growing and will continue to grow exponentially. Since North Carolina is a battleground state and with the burgeoning size of the Latino electorate every year, Latinos in NC have the potential to overturn elections this year and most definitely in the future as it grows.”

How are churches playing a role in reaching Hispanic voters?

“We have seen more and more mobilization taking place in Latino churches – and we are also seeing this in North Carolina. Republican candidates and right-leaning civic and political organizations will go to Latino churches to share information about their campaign, their stances, get them excited about voting and things like that. That wasn’t really the case several years ago, but we have seen more and more candidates and parties visiting churches – even the pastors themselves taking political stances and doing that. There is also a group in North Carolina who is mobilizing people called The LIBRE Initiative.”

Do you have any concerns about Latino voter engagement?

“What is overwhelming me and bringing me great concern is the fact that there is a lot of Spanish language misinformation, disinformation that is spreading and we don’t know how to track it and we don’t know how bad it is. It’s moving through Facebook, through YouTube, and Whatsapp. Reliance on Whatsapp to communicate with friends and family is especially common among Latino immigrants. Information can cross borders such that someone in a Latin American country such as El Salvador can spread misinformation or disinformation to someone living in the United States and vice versa.

Relative to their white counterparts, Latino and African American voters generally have low levels of political knowledge. It is no surprise that those of immigrant backgrounds who are new to this country are slowly developing their knowledge of political institutions, political parties, issues and stances of candidates. Thus, individuals may be more likely to rely upon social media and their friends and peers to give them basic election information. If that information is faulty and they don’t know that it’s faulty, it can spread very quickly. We have proof that this is taking place.  It’s a significant problem because it’s spreading through Whatsapp and other encrypted sites and, thus, we don’t know the extent that misinformation and disinformation is spreading.”

Early voting in North Carolina runs through Saturday, November 5. The 2022 general election will be held on Tuesday, November 8.