WFU Awards Teachers $20,000 Each For Excellence 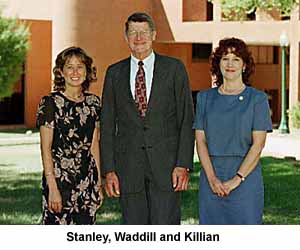 The Waddill awards annually recognize Wake Forest alumni who are outstanding teachers. A primary and a secondary teacher are chosen for the award and presented $20,000 each.

In 1994, New York businessman David Waddill established the gift in honor of his father, Marcellus Waddill, who retired this year after teaching mathematics at Wake Forest for 35 years. Sixty-five nominees competed for this year’s award. Nominees must submit lesson plans, letters of recommendation and essays. Finalists also are interviewed and videotaped while teaching.

Killian graduated in 1974 with a bachelor’s degree in French from Wake Forest. After earning a master’s degree in the language, she began teaching in 1977. She has taught at Eastside High School since 1989.

Stanley began her teaching career in 1984 after graduating from Wake Forest. In 1991, Stanley joined Richey Elementary, where she teaches kindergarten through second grade in a multi-grade classroom.