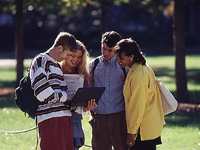 Wake Forest University opens its fall semester on Aug. 25 with a yearlong celebration of science and technology, new and renovated buildings, a new divinity school, and an additional residential study center in Europe.

The semester also marks a new point in Wake Forest’s technology initiative, launched three years ago as part of the Wake Forest Undergraduate Plan, a blueprint to enhance undergraduate education. For the first time, all undergraduates will have laptop computers provided by the university. Wake Forest has gradually worked toward this point since fall 1996, distributing IBM ThinkPads to each new freshman class.

“This fall, we see the growing influence of the Undergraduate Plan on Wake Forest,” according to Paul D. Escott, dean of the College of Arts and Sciences. “In many aspects of their college experience, students are benefiting from the plan.”

“At the plan’s core is a commitment to preserving individualized instruction and small classes at Wake Forest, but the plan has many features that express themselves in a highly visible manner,” Escott added.

Devoting each year to particular themes, such as science and technology, is a direct outgrowth of the plan. The same is the case with continued attention to the university’s physical facilities and greater emphasis on study abroad.

For its special exploration of the science and technology theme, Wake Forest has scheduled a series of speakers, events and activities focusing on cloning, computer security issues, the environment, and numerous other topics.

“The change of the new millennium seemed like the perfect time to discuss the achievements of science and technology and to look toward the future and what it might hold,” said Wake Forest Professor of Biology William E. Conner, who is chairing the series called “Science and Technology: The Next Millennium.” The majority of the programming for the series, which begins Sept. 16, will be free and open to the public.

Students arriving on campus later this month will see work nearing completion on East Hall, a new classroom building. Due to be occupied in October, the 80,000-square-foot, five-level building will provide a new home to the Romance languages, German and Russian, and psychology departments. East Hall stands along Magnolia Court, a grass-covered lawn distinguished by several magnolia trees near the center of campus.

The new building is a showcase for the multimedia equipment the university has been installing in classrooms across campus in recent years. It is the first Wake Forest building to feature the latest in multimedia equipment in every classroom. The rooms contain DVD video and audio equipment, as well as video document presenters, videocassette recorders and more.

Throughout the summer, renovation has been underway at residence halls across campus. Work was completed on a three-year project to install new fire alarm and smoke detector systems in residence halls. In addition, sprinkler systems were installed in several residence halls.

The Campus Ministry department has moved into a new location, thanks to extensive renovations on the lower level of Kitchin Residence Hall. The new space provides offices for Baptist, Catholic, Methodist, Presbyterian, Episcopal and Lutheran ministries, as well as the Intervarsity Christian Fellowship organization.

Another high-profile renovation occurred at Wingate Hall, adjacent to Wait Chapel. A two-story addition to Wingate Hall was completed this summer for the new Wake Forest Divinity School. Faculty and administrative offices occupy the 2,600-square-foot addition. The addition provides Wingate Hall with an entrance distinguished by four columns and a foyer highlighted by an inlaid marble cross in its floor.

The divinity school opens to 24 full-time students from a variety of denominational traditions. Classes start on Aug. 25 for the students seeking a master of divinity degree through the new three-year program. Courses will be taught by divinity school faculty, as well as faculty from Wake Forest’s undergraduate, graduate and professional schools. Wingate Hall will house classrooms, as well as offices, for the divinity school.

The divinity school officially celebrates its opening with events Oct. 12 and 13.

Also opening this fall is a new university-owned residential study center in Vienna, Austria. Fourteen undergraduates will take classes and live at the new facility, called Flow House in honor of Wake Forest trustee Victor I. Flow Jr. and his wife, Roddy. The Winston-Salem couple made a major gift to Wake Forest, enabling it to buy the 19th century Vienna villa. A renovation of the villa was completed this summer.

Flow House is Wake Forest’s third residential study center in Europe. Others include Worrell House in London and Casa Artom in Venice. Flow House will be officially dedicated in October.

Those studying at Flow House will enjoy the same access to the Internet provided to students on campus. The facility’s renovation included installing equipment that gives students direct access to the university computer network and, ultimately, the Internet. Students will bring laptop computers to Flow House to assist in their studies.

This fall marks the fourth consecutive year that Wake Forest distributes IBM ThinkPads to freshmen. The result is all four classes–freshmen, sophomores, juniors and seniors–will now have laptops. Laptop distributions began in fall 1996, with the start of a comprehensive technology initiative intended to encourage the integration of computer technology into a liberal arts education at the university.

Freshmen arriving for orientation on Aug. 18 will pick up their ThinkPads that afternoon at the Information Systems Building. They will also receive Lexmark color inkjet printers. Freshmen will attend one of two computer training sessions being held at various locations in the afternoon and evening on Aug. 20.

The same laptops will be distributed to juniors in the morning on Aug. 23 when they turn in computers they received as freshmen. Wake Forest students use laptops for two years before upgrading to new ones that they will eventually keep upon graduation. Juniors will pick up their computers at the Information Systems Building.

Since computer distributions began at Wake Forest, students have been given opportunities to use them in and outside of the classroom in many courses. Through the university computer network, students submit assignments, take online quizzes, participate in group discussions of class topics, review and comment on each other’s writings, and take advantage of Web-based information resources. Electronic discussions outside of class often help students be better prepared when they meet for class, some faculty report.

“Technology multiplies the opportunities for a student to be an active learner and increases his or her responsibility to evaluate information critically,” Dean Escott said.

Wake Forest has added many online services, including application for admission and course registration. From residence halls and classrooms, students also use their laptops to search online for more than one million volumes in the library. The library makes available online more than 500 electronic databases and journals, as well as an image database.