WF kicks off capital campaign with April 26 parade of Deacons 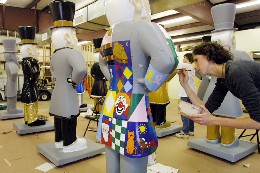 Students, faculty, staff and volunteers will gather on University Plaza at Wake Forest at 4 p.m. for the unveiling and parade of the tall, fiberglass versions of the famed Wake Forest mascot-the Demon Deacon. In striking contrast with the traditional Deacon, known primarily for his simple black suit and top hat, many of these Deacons will be decorated with bright colors and images unlike any ever seen on the mascot. The Deacons feature themes ranging from last fall’s presidential debate at Wake Forest to student volunteerism.

“We thought this would be a fun way to bring the Wake Forest community together and celebrate the start of a major new phase in the capital campaign,” said Jennifer Richwine, director of campaign programs. “Students and others across the university pitched in to decorate the Deacons in an entertaining way.”

The goal of the “Honoring the Promise” capital campaign will be announced on April 26, but it is expected to be at least $400 million, said James Bullock, assistant vice president and campaign director. The Wake Forest School of Medicine is conducting a capital campaign that will account for approximately a third of the university-wide campaign goal.

The Wake Forest campaign is designed to raise endowment for student financial aid and faculty support, as well as to meet other university needs, such as ongoing operating expenses.

“To ensure that our doors remain open to students from all economic backgrounds, we must increase the number and value of scholarships currently offered, especially to middle-class students,” said Wake Forest President Thomas K. Hearn Jr. “And to ensure that those students do in fact have a superior academic experience, we must increase faculty support to attract and retain the very best teacher-scholars possible.”

The initial phase of the capital campaign began about 18 months ago, when university representatives began meeting privately with a number of prospective major donors, including individuals, foundations and corporations. In addition to the goal, the amount of money raised to this point will be announced on April 26.

The campaign is scheduled to continue until 2006.

Hundreds of students, faculty, staff and volunteers are expected to join in the public kickoff for the campaign. Hundreds of volunteers will be at the university for a Volunteer Leadership Conference.

“We want the parade of Deacons to create an awareness of the capital campaign among those many people so important to the university,” said Richwine. “The campaign is geared toward people, particularly students and faculty, and we want these people and others to be able to participate.”

After the 20 Deacons are unveiled, their decorators will roll them around University Plaza. Each Deacon is mounted on small rollers, Richwine explained.

The challenge of decorating the Deacons was accepted by the university’s graduate and professional schools, as well as the Athletics department, the Alumni office, the Army ROTC program, the art department, student organizations, and individual students. In many instances, it is apparent which groups have decorated them.

For instance, the ROTC Deacon will be decked out in camouflage clothing and face paint.

Senior Brett Sheats, one of about six ROTC cadets who has painted their Deacon, said the project has given them a “relaxing change of pace” from their usual academic activities. But, they have still taken the job seriously, bringing in a cadet known for his camouflage face-painting skills to apply his talent to the Deacon’s broad facial features.

After the Deacons’ debut on April 26, they will be positioned in various buildings throughout the university. Next fall, at Homecoming, they will be auctioned to university alumni, parents and friends.

The idea of creating the specially designed Deacons for the kickoff was inspired by “Cow Parades” in Chicago and New York City, in which decorated fiberglass cows were put on public display and later auctioned to raise money for charity. Similar events have occurred in Europe.