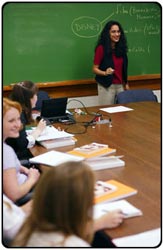 Of the 14 Wake Forest University freshmen in Deepa Kumar’s class “Disney, Culture and Power,” only one has never been to Walt Disney World. But, even he understands the power of Disney.

“It’s tough for the kids that don’t go to Disney World growing up,” said Peter Ayoub, a freshman from New Canaan, Conn., during a recent class discussion. “You don’t fit in.”

It is that exact feeling about Disney that Kumar, a visiting assistant professor of communication, said she hopes her students will examine carefully and critically this semester. The class is one of the university’s many first-year seminars, small classes designed especially for freshmen to develop critical thinking skills.

Kumar says today’s Wake Forest students are examples of a generation of children who have grown up knowing about, if not directly experiencing, at least some facet of Disney. The course will encourage students to critically study the Disney conglomerate as part of the mass media system that influences individuals and society as a whole.

“This isn’t about Disney-bashing,” she says. “I am trying to make the students aware of the ubiquity of the Disney phenomenon and how everyone, without exception, has been impacted in ways big and small by Disney. Our understanding of ourselves and our society is shaped by large media corporations like Disney. We should take seriously the educational role that Disney plays in our society, rather than dismiss it as mere entertainment.” 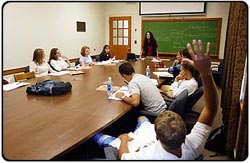 Kumar’s course outline includes viewings of “Snow White and the Seven Dwarfs,” “Beauty and the Beast,” “Aladdin” and other films. To complement class discussions, students are reading recent books written about Disney and several related journal articles on Disney films, its theme parks, merchandise and business strategies. During the course of the semester, they will write analytical response papers to the films, compose a research paper and make a final presentation on their research.

In a class meeting early in the semester, students shared their memories of Disney movies, toys and products. Ayoub said as a young boy he wanted to grow up to be Aladdin or Simba (from the “Lion King”). Kaitlyn Ranney of Marrieta, Ga., said her family would go to Disney World every summer in the same way that some families go to the beach or to the mountains. Kristin Cook of Asheville said that Disney movies were the basis for many of her childhood lessons on right and wrong. She told her classmates that her dad still calls her his “little princess.”

“For Father’s Day this year I made my dad a storybook using Disney characters with all the lessons he taught me growing up,” Cook said. “All of our moral discussions were based on Disney stories.”

Kumar, who specializes in cultural studies, says for all the positive messages communicated in Disney films and products, there are aspects of the Disney culture that should be examined closely. For instance, students will be asked to study female stereotypes portrayed in films like “Snow White” and “The Little Mermaid,” and the implications those images have on impressionable young girls. The course also raises questions about the commercialization of children’s lives.

“In some ways, Disney has altered the expectations of what it means to be happy,” Kumar says. “By equating happiness and love with the purchase of Disney merchandise or a trip to Disney World, Disney commodifies our relationships. Cultural studies, critical media studies, and this class are about being a critical consumer of the mass media and defining for oneself what it means to be happy.”