Harvard scholar on race and poverty to speak at WFU

Orlando Patterson, John Cowles Professor of Sociology at Harvard University and a leading scholar on the roots of racism and poverty, will present a lecture at Wake Forest University at 4 p.m. March 22 in Benson University Center’s Pugh Auditorium.

Patterson’s talk, “American Dionysus: The Image and Reality of African American Men,” is free and open to the public. 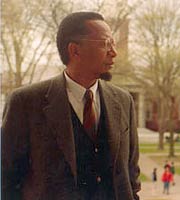 The author of eight books, Patterson has helped shape the national debate on race in America. He won the 1991 National Book Award for “Freedom: Freedom in the Making of Western Culture,” the first of a two-volume sociological study of freedom. He is currently working on the second volume.

Patterson examined slavery as a worldwide institution in his book, “Slavery and Death: A Comparative Study,” which won the 1983 Distinguished Contribution to Social Scholarship Award from the American Sociological Association (the Sorokin Prize).

In recent years, he has focused his research on contemporary America and the intersecting problems of race, immigration and multiculturalism. He has completed two volumes of a trilogy addressing these issues: “The Ordeal of Integration: Progress and Resentment in America’s ‘Racial’ Crisis” and “Rituals of Blood: Consequences of Slavery in Two American Centuries.”

He received his doctorate in sociology from the London School of Economics and served on the faculty there and at the University of the West Indies before joining the Harvard faculty in 1969.

Patterson served as special advisor for social policy and development to Jamaican Prime Minister Michael Manley in the 1970s.

Patterson has also published three novels, “The Children of Sisyphus,” “An Absence of Ruins,” and “Die the Long Day,” a number of anthologized short stories and numerous reviews and critical essays. His opinion pieces appear in The New York Times, Newsweek, the New Republic and other periodicals. He is a fellow of the American Academy of Arts and Sciences.

Patterson will sign books in the lobby of Pugh Auditorium from 3:15 to 3:45 p.m.

The lecture is sponsored by Wake Forest’s sociology department. For information, call 336-758-5495.