WFU professor to give timely talk on state of Europe, ‘Blair’s War’ 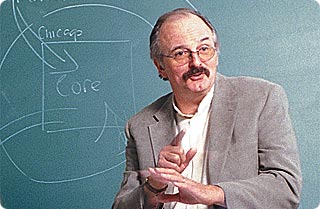 During his lecture, Coates will explore the reasons for the invasion of Iraq, and for Tony Blair’s willingness to be a key ally of the United States in that invasion. He will survey the evidence on the adequacy of those reasons and comment on the resulting political situation of the Bush administration and the British government. All of these issues are in the news at this time, and Coates is uniquely qualified to address them from both a U.S. and British perspective because he is British but has lived in the United States for several years. In addition, he is an expert on the British Labour Party and Anglo-American politics.

Coates’ new book, “Blair’s War,” which he wrote with Joel Krieger of Wellesley College, was released in the United Kingdom in March by Polity Press and in the United States in April. The book offers a critical analysis of the arguments for going to war with Iraq. Coates will discuss the book during his lecture.

The lecture is offered as part of Winston-Salem’s Great Decisions 2004 lecture series and is hosted by the Wake Forest University Center for International Studies. It is the last of six lectures in the series, which is designed as a six-week citizens’ forum on current foreign policy issues.