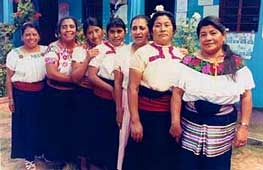 As part of a two-week North Carolina tour, La FOMMA, a Mayan women’s theater cooperative from the Mexican state of Chiapas, will perform “Solidad e Esperanza” (Solitude and Hope) at Wake Forest University at 7:30 p.m. Oct. 18 in Pugh Auditorium. The play gives a personal look into the hopes and sorrows around one woman’s journey from her village childhood to the new challenges of her life in the city. The performance will be made in Spanish with translation summaries provided. Admission is free.

FOMMA is an acronym for “Fortaleza de la Mujer Maya” or “Strength of the Mayan Woman.” Founded in 1994, the group is a pioneer in theater and social justice in Mexico. Maintaining the belief that literacy and theater are powerful tools in building self-confidence, the group works to empower displaced Indian women and children through literacy programs, job skills training and original theatrical productions designed to raise awareness of indigenous women’s concerns in Mexico.

The Mayan founders of FOMMA, Petrona de la Cruz Cruz and Isabel Juárez Espinosa, were the first Indian women to ever appear on stage in Chiapas. Both women came to San Cristóbal, Chiapas, as child servants and were determined to work their way through elementary school. As young adults they were hired by the Indian writer’s cooperative, Sna Jtz’ibajom, where they were trained in bilingual education and acting.

Because they have defied their modest upbringing and traditional boundaries by acting and even portraying men in their plays, they have endured both scorn from their community and city and accolades from the international theater world.

They are heralded as Mexico’s first Indian women playwrights. They have won numerous prizes and recently celebrated their tenth anniversary by performing at the Tlalpan Festival of the Arts in Mexico City. They have also been awarded a $50,000 grant from the Ford Foundation and New York University to build a theater in San Cirstóbal to be used by FOMMA and other organizations participating in projects benefiting Chiapas Indians.

The troupe’s appearance at Wake Forest is sponsored by the anthropology department, theatre department, history department, romance languages department, women’s and gender studies programs, Center for International Studies and the Dean of the College.