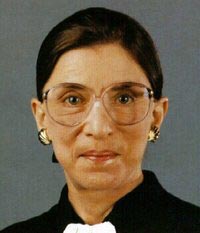 Sponsored by the Wake Forest School of Law, “A Conversation with Justice Ginsburg” will begin at 4 p.m. in Wait Chapel. The event is part of a series that brings role models in the legal profession to Wake Forest to discuss their professional lives.

The event is free and open to members of the Wake Forest community and their guests.

Ginsburg was born in 1933 in Brooklyn, N.Y. She holds a bachelor’s degree from Cornell University and attended Harvard Law School before earning a law degree from Columbia Law School. She was elected to the law reviews at both schools.

Ginsburg served as a clerk for U.S. District Judge Edmund L. Palmieri and later taught at Rutgers University Law School and Columbia Law School. During the 1970s, she served as the director of the Women’s Rights Project of the American Civil Liberties Union. In that role, she won five of six cases on gender equality that she argued before the Supreme Court.

In 1980, President Jimmy Carter appointed Ginsburg to the U.S. Court of Appeals, District of Columbia Circuit. She served there until she was appointed to the Supreme Court in 1993.