Lakshmi Krishnan, a Wake Forest University senior who explores the connections between literature, medicine and human rights, has been named a Rhodes Scholar. 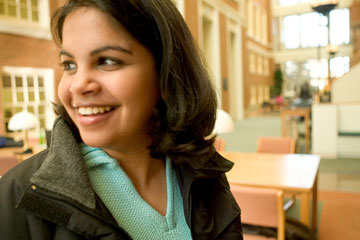 Krishnan, of Sugar Land, Texas, is among 32 Americans chosen by the Rhodes Trust Nov. 19 to study at England’s Oxford University in 2006 as Rhodes Scholars. Krishnan and the other Americans will join additional Rhodes Scholars selected from districts around the world. At Oxford, she plans to pursue a master’s degree in English literature. She is majoring in English and German at Wake Forest.

Krishnan is currently writing her senior honors thesis about vampires and blood contagion in 19th century novels. In the thesis, she expects to relate three novels to modern anxieties about AIDS and other blood-transmitted diseases.

“This is a dramatic way to link literature and medicine,” Krishnan said.

Her goal is to go to medical school. “I would love to work as a physician studying medical issues in the developing world,” said Krishnan, who was born in Bombay and has lived in England and the United States.

As president of Wake Forest’s chapter of Amnesty International, Krishnan has focused on global AIDS and the human rights issues associated with it. She organized campus events addressing AIDS issues as well as other human rights issues including the death penalty and domestic violence. She worked as an intern with the non-profit organization Physicians for Human Rights. While there, she researched the conflict in northern Uganda and its effects on HIV/AIDS transmission. She wrote papers to support the organization’s Health Action AIDS Campaign. One regarding HIV/AIDS prevention was used to educate health professionals in Kampala, Uganda.

In 2002, Krishnan explored the connections between Emily Bronte’s life and her novel “Wuthering Heights” during a summer research project in England funded by a Carswell grant from Wake Forest. Her paper is archived at the Bronte Parsonage Museum Library in Yorkshire, England.

Krishnan received additional grants from Wake Forest for research. “Each summer, I have been able to focus on a different interest of mine, literature, medicine and human rights,” Krishnan said. “All three came together in the Rhodes process.”

She is the editor of the Philomathesian Arts and Sciences Journal at Wake Forest.

Krishnan has also done research on the effect of Hepatitis C virus on liver tissue and has submitted a paper for publication.