Michelle Sikes, captain of the women’s track and cross country teams at Wake Forest University, has been named a Rhodes Scholar. 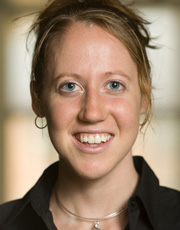 She is among 32 Americans chosen by the Rhodes Trust Nov. 18 to study at England’s Oxford University in 2007 as Rhodes Scholars. At Oxford, she plans to pursue a Master of Science degree in global health science. At Wake Forest, she is majoring in mathematical economics with a minor in health policy and administration.

“As a runner, my goal is to qualify for the Olympics,” said Sikes, who has been named an NCAA Track and Field All-American. She was named Cross Country ACC Freshman of the Year in 2003. “As a student, I want to use the Oxford education as a springboard into a career devoted to solving the health problems within disadvantaged populations.”

During the summer, Sikes held an internship with The American Enterprise Institute for Public Policy Research in Washington, D.C. While there, she researched various mathematical models that might increase the number of organ donors. Her honors thesis will focus on using the data collected to propose the best ways to reform the nation’s policy on transplantable organs.

“I am so thankful for the past three-and-a-half years at Wake Forest,” Sikes said. “I feel so fortunate to have had the opportunity to enjoy stimulating academics, membership in an intensely competitive sports conference, and an incomparably supportive and friendly environment during my time here.”

Her goal is to study the health issues of countries in the developing world as well as difficulties that are encountered within impoverished neighborhoods of cities in the United States. She would like to work for the World Health Organization and design public health policy.

“Michelle is really interested in the notion of applying economics to crucial social issues,” said Michael Lawlor, professor of economics and Sikes’ academic advisor. “She is a great student.”

Fluent in Spanish, Sikes volunteers as an interpreter at El Centro Clinico, a clinic for low-income Hispanic patients in Winston-Salem. She also serves as a Wake Forest student government representative.